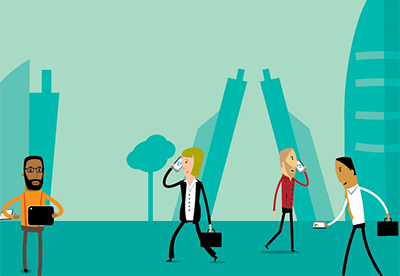 In this new age of the sharing economy, where people have a collection of jobs (sometimes several at once) rather than a job for life, is there an opportunity for insurers to meet the needs of individuals in ways that may have previously been filled by employers?

Employers often evaluate what their employees require to keep them engaged and motivated, and the list usually includes a reasonable salary, opportunities to grow and learn, and fulfilment.

Employees are also likely to want peace of mind and broader financial security, including long-term savings plans (such as employer-sponsored pension schemes) and group protection policies. Peace of mind is now regularly being extended to include an overall sense of wellbeing and the elusive work-life balance.

Thinking about the wellbeing of workers is not a new concept either. At the turn of the 19th century, Robert Owen became the manager of a cotton mill in New Lanark, just outside Glasgow. Owen employed around 2,000 people, including a large proportion of children, who not only worked but also lived in the mill village. He was a visionary, who could see the benefits of looking after the broader wellbeing of his employees. Over the years, Owen greatly improved the working and living conditions in the community. He built schools and nurseries and arranged evening classes for adults. He also provided better break-times and improved the overall health of his workers.

Owen published his essay, A New View of Society, in 1813, and philanthropists at the time could see the merits of his progressive system of employment, which looked after wider aspects of life to ensure happier workers. Although Owen did achieve increased productivity and profit, the degree of improvement was not sufficient to convince his other partners that the cost was fully recouped. So although these extreme levels of employer intervention were not widely rolled out, Owen's philosophies did mark a step change, and employers became increasingly paternalistic throughout the 19th and 20th century, with many providing ancillary benefits, such as final salary pensions. The concept of a 'job for life' was fairly common until the start of this century.

At the start of my own career, the insurance company that I worked for provided a final salary pension, subsidised mortgages and, best of all, a free staff canteen at lunchtime. And employers do still look to provide a wide variety of benefits and additional perks to attract and retain their employees.

The final salary pension has now fallen out of favour in the UK, but auto-enrolment ensures that a base level of pension contributions (albeit low) are made on behalf of employees. Plus many employers will also include private medical insurance and other forms of protection in their remuneration packages.

So what does the picture look like for those who are self-employed? The UK is enjoying a period of low unemployment at the moment, but, importantly, one of the biggest contributors to new employment has been in the self-employed group.

An interesting sub-set of the self-employed group are those who make up the 'gig economy', which the Cambridge English Dictionary defines as 'a way of working based on people having temporary jobs or doing separate pieces of work, each paid separately, rather than working for an employer'. Similar to musicians who work on a gig-by-gig basis, those who work this way are remunerated on a pay-per-play approach, with no contracted hours of work. The most commonly known examples are Uber drivers and Deliveroo food delivery services, but these types of services only make up 16% of the gig economy, according to extensive research carried out by the Royal Society for the Encouragement of Arts, Manufactures and Commerce in its Good Gigs report, published in April this year. Another good example is TaskRabbit, where workers can log onto a website to meet the needs of those who need a particular errand run. This approach has also been utilised in the cleaning business, with Hassle offering to match ready and willing cleaners with those who have a cleaning need.

None of this could happen without easy-to-use enabling technology, which allows those who need services to link up with those who are able to provide them. Technology also allows for the easy transfer of payment between the two parties. And not all gig workers are delivery drivers or cleaners; many types of jobs utilise zero-hour contracts, including some professional roles - for example, airline pilots.

Those working in the gig economy enjoy the flexibility it provides and they feel more in control of how and when they work. For example, many combine this type of work with studying or caring for family members. Indeed, having a flexible labour market is recognised as leading to greater efficiencies for the whole economy, and the UK is seen to be enjoying the advantages of this very flexible market.

But while the gig economy provides advantages for both workers and industry, we should consider some of the other aspects where a gig worker may be missing out by not having an employer. It is already widely recognised that the success of auto-enrolment has not been enjoyed by those who are self-employed. Indeed, the UK Department for Work and Pensions review, announced in December 2016, will pick up on this gap.

For gig workers, this gap appears to be even more pronounced and extends to more than just pension contributions. For example, a family often depends on their main breadwinner to cover monthly rent and bills, but a gig worker in this position will not have any employer-organised life cover or income protection. Unless this worker has taken out their own protection policies, the family are very much at risk of being unable to meet their monthly outgoings should the main earner fall seriously ill.

As recognised in the Taylor review of modern working practices in July this year, the area of employment law will need to move with the times and ensure that all types of workers are covered in terms of fair pay, employment rights and working conditions. It is unlikely though that this will extend to the provision of the same types of products that employed individuals usually have.

So government intervention may help, but it looks likely that other routes will be needed to ensure that all workers have all the financial products that they need.

An opportunity for insurers

One route may be for the product providers themselves to tailor their products for gig workers. For example, the simple idea of allowing life cover premiums to be paid on a pattern that varies in different months (as opposed to the traditional route of having the same fixed premium every month) could allow that type of policy to become more accessible to those with a fluctuating monthly income, while maintaining the same sum-assured.

Another area that we expect to grow is the use of platforms that allow workers to port benefits as they move from one job to another. An example of this has already been seen in the US, where Uber has partnered with the International Association of Machinists and Aerospace Workers union. Together, they are looking to find a solution that allows for portable benefits, such as healthcare and pension plans, that are connected to a worker rather than a company and can be kept across different parts of the gig economy.

In the UK, there are similar groups being set up, such as the Sharing Economy UK (SEUK) which is a new trade body that sets out standards and provides support for workers in the shared economy. Perhaps by speaking directly to these types of organisations, the UK financial services industry can work to find ways to support all types of workers.

Current trends indicate that the new technology-enabled way of working, which supports a buoyant, flexible economy, is set to grow. Ultimately, it could lead to a whole new route of providing for workers that could never have been imagined by Robert Owen.

Karen Brolly is head of products, life and financial services at Hymans Robertson

This article appeared in our December 2017 issue of The Actuary.
Click here to view this issue
Filed in
12
Topics
General Insurance