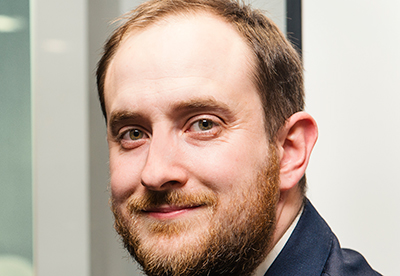 I met Michael Sanders, chief scientist and head of research and evaluation at the Behavioural Insights Team (BIT), following the IFoA autumn lecture he gave on data science and its potential for actuaries and policymaking.

Set up by the UK government just after the 2010 election, the formation of BIT was influenced by the work of behavioural economists such as Richard Thaler, author of Nudge, who was recently awarded the Nobel Memorial Prize in economic sciences.

Thaler came up with the concept of looking at how people act then 'nudging' them via subtle interventions to help them make more informed decisions that are in their best interest.

As Sanders explains, when David Cameron's government first established BIT, there were initially some areas of low-hanging fruit ripe for the team to pick. One, for example, was to look at the way taxes were being paid. Most people were paying in full and on time, yet a small hard core were often late. This meant a lot of chasing and inevitable cash shortfalls. Small interventions in the way in which payment was encouraged, such as publicity declaring that "95% of taxpayers file their returns and pay their taxes before the end of the month" led to improvements in the pace of settlement. People tend to be responsive to any suggestion that their behaviour is out of line with what others do or expect.

A nudge for charity

Another idea BIT focused on was 'big society', a concept that is much less in political favour today. This drew on Sanders' interest in charitable fundraising, the subject of his PhD research at the University of Bristol. In fact, it was one of his seminars on the subject that caught the attention of the Cabinet Office, and he was invited to join the team.

Sanders had cut his teeth with work on 'pro-social behaviour', or the economics of people being nice to one another. This experience was relevant to some of the work being done by BIT on charitable and volunteer activity. Why people donate or volunteer is a challenging behavioural question. Early experiences or encounters with volunteering can influence a person's future approach.

Sanders is particularly proud of the team's efforts to encourage people from less privileged backgrounds to raise their aspirations regarding choice of university or career. This was done using letters written by fictional university students to their former selves when they were at school. These letters were shared with students at school to help inspire them to 'think big' when it came to their future career. A rigorous test was applied, using a large sample of students, only some of whom received the letters. The data suggested a definite raising of the bar in those students' ambitions. This kind of result can inform the type of communication material that university or school careers advisers provide access to when they help students in their university and career choices.

Another issue, according to Sanders, is inertia. He believes that people's choices of career and residence are often driven by autoregression - in other words, the tendency to work or study in similar fields and locations as relatives or friends. Policymakers may choose to focus on changing this kind of behaviour to make the economy more efficient.

Sanders also emphasises the importance of making decisions in what he calls 'cold states' rather than 'hot states'. Health policymakers, for instance, can take a detached view of the arguments for and against different treatments, whereas patients - or their relatives - are more likely to be in a 'hot state' of anxiety when considering treatment options, and cost is likely to be a low priority. He drew a parallel with the way in which the 1997 Labour government handed control of interest rates to an independent Bank of England, rather than letting politicians set them, which inevitably led to fewer politically motivated adjustments ahead of election campaigns.

Looking at the actuarial profession, Sanders draws attention to "the hyper-availability of data", whereby insurers often have far more data about the people they insure than those individuals do themselves. For example, monitors in cars or health or geographical data can help us better assess a population's risks. His big question is whether the industry has a moral responsibility to share that knowledge with the insured, just as a doctor has a duty to tell a patient about their potential health risks.

Thorny policy areas include road pricing, which has obvious economic attractions but is incredibly unpopular with the public. Sanders notes that of the public petitions on the UK parliament website, one of those that gained most signatures was against direct charges levied for the use of roads - attracting far more attention than the petition against the war in Iraq. A perennial problem with public communication, he says, is that "confirmation bias presents us with problems in influencing the public". Put simply, people tend to pay far more attention to messages they agree with than those that challenge them with something different.

Sanders mentions analysis of behavioural responses to tax - in particular, inheritance tax, where people can have an emotional response to a 'penalty' associated with death. An example is the UK public reaction to 'dementia tax' proposals to pay for care-home costs. Property taxation also raises anxieties, he notes, and is difficult to tackle objectively. Countries such as the US manage this successfully, raising a much higher proportions of tax from real estate.

Congestion charging is an interesting area - opinions are often polarised, gaining popularity with some but not others. Policies have been trialled in only a few places, including London, Singapore and Oslo. But authorities need to be careful, as responses to congestion charging can be unintended - in Singapore, for example, faced with high congestion charge costs for driving into town between 7am and 9am, people turned to driving in between 5am and 7am, simply shifting the problem to a different time of the day.

Today, BIT is independent of the UK government and acts as a supplier of services, competing against other bidders such as management consultancies and academics, making proposals in the area of behavioural science. Some of the team's work is overseas too. A recent example is a collaboration with the International Rescue Committee to try to improve education outcomes for traumatised Syrian refugee children.

Each government department does, however, need to have a behavioural insight function, and there is clearly good liaison between those who are concerned with this area. There is a balance between government departments' need for assistance and opportunities for BIT to promote areas for work.

"Social care is a big area for us to promote," says Sanders, with work for the local authority sector including approaches to childcare and improving the outcomes for children who may be taken into care.

In the financial services sector, issues such as transparency of pricing information for customers raise their head, and Sanders' team regularly liaises with its opposite number in the Financial Conduct Authority.

It was refreshing to hear Sanders' emphasis on evidential standards and ensuring that policy is based on "what works".Behavioural insight can be applied in all areas to improve outcomes for the public and our customers.

However, Sanders is emphatic that the 'nudges' that governments can provide should not be seen as creepy attempts by the authorities to get us to do what they want but are in fact transparent and clear.

As well as providing interesting papers and topics for discussion, this branch of economics is here to stay. If we embrace it, it has the potential to help us improve the way we conduct our affairs.

This article appeared in our November 2017 issue of The Actuary.
Click here to view this issue
Filed in
11
Also filed in
Interviews
Topics
Data Science
General Insurance