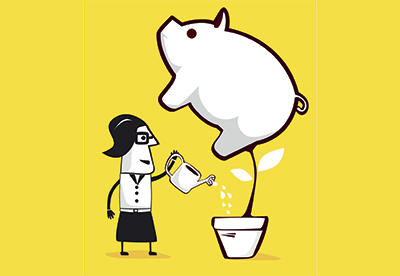 Mandatory gender pay reporting arrived for larger companies in the UK on 6 April, putting further scrutiny on how men and women are treated financially by their employers. Pensions have their own considerations in this area.

Member option terms and actuarial factors based on gender are commonly used by UK pension schemes, particularly with regard to transfer values and lump sum commutation. This means that, in many cases, a woman and man who are the same age and lead identical lives are offered different transfer values or cash sums for the same amount of pension given up.

They have both been given exactly the same benefit promise by the scheme but are, ultimately, paid different amounts because women are on average expected to live longer than men. This can result in a substantial difference to cash lump sums of around 10% - £25,000 on a £10,000 yearly pension. Mostly, it is the men who lose out but, for transfer values where the spouse's benefit is particularly generous, it can be the other way round.

The importance of gender here is the status quo - in part because gender is observable and the factor differences are easy to assess. However, just because it is practical and legal to continue this practice, does the actuarial and social rationale really stack up?

Are there more significant indicators of an individual's longevity, such as health, wealth, family history and whether they smoke?

Using gender-specific terms for insurance premiums is already illegal under EU law. Is it right to maintain this inconsistency between the treatment of insurance and pension terms?

Just as the tax avoidance scandal involved the public condemnation of a legal practice, is there a risk of a public perception of discrimination around the continued - albeit legal - use of gender-specific actuarial factors?

While the difference in male and female life expectancy is well acknowledged - around two years between men and women currently in their 40s - the underlying causes of the difference remain a topic for debate.

Importantly, this includes the extent to which it is due to differences in the genetic make-up of men and women - ie 'nature' effects - or down to nurtured behavioural differences.The table below shows some of the theories and evidence that have been put forward on each side of this debate. It seems most likely that the truth lies in some combination of these factors.

This uncertainty over the cause of the differences between male and female lifespans makes it harder to justify the inconsistency between the treatment of pension member option terms and the treatment of car insurance terms, say.

In addition, does it really satisfy the 'justified by actuarial data' requirement to project future differences in life expectancy if we cannot explain the underlying cause - when we cannot ascertain the extent to which differentiation by gender is merely a proxy for other underlying drivers of longevity? 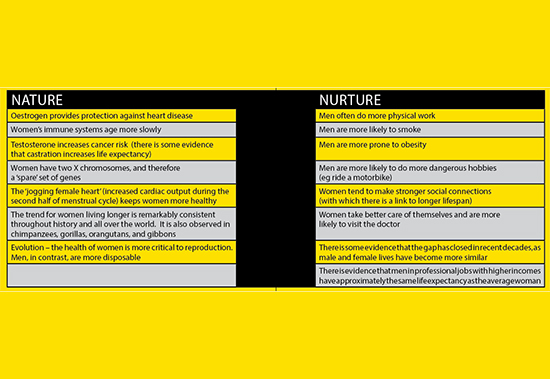 Allowing for observable differences in average life expectancy between groups of people is uncontroversial for accounting or funding purposes, or in other instances where actuarial correctness at the aggregate scheme level is paramount. That said, in theory, applying different assumptions to individuals or groups within the scheme, rather than working with weighted average assumptions applied to all members, should have a broadly neutral financial impact on the scheme.

This is, ultimately, more a social decision rather than an actuarial one. Is it justifiable and fair to differentiate between people in this way? Should a man get a lower cash sum because historically more men than women have done physical work and smoked more?

If we are allowing for gender differences, what other differences in life expectancy is it justifiable and fair to allow for? Should more wealthy people receive a proportionately higher cash lump sum?

Postcodes give an indication of a person's wealth, occupation and lifestyle. If you paid different cash sums using the life expectancy implied by members' home addresses, the difference between the highest and lowest amounts paid might be as much as 25% (around £60,000 on a £10,000 yearly pension). It is not generally considered appropriate to do this in practice, but it remains common practice to allow for (potentially smaller) gender-based differences.

It may be argued that defined benefit pension schemes are inherently unfair, in that everyone pays in proportionately the same amount but you get more out if you happen to live longer. However, that is built into the underlying benefit promise - it is 'part of the deal' and members generally understand that.

By deliberately providing different cash lump sums to men and women, we make a conscious decision to crystallise that aspect of 'unfairness', based on - as highlighted earlier - somewhat questionable technical rationale.

There may be instances where trustees and pension scheme sponsors deem it appropriate to continue to use different actuarial factors for men and women, based on their specific circumstances (for example, to avoid a step change in historical terms or because of concerns around selection against the scheme).

However, they should at least ensure they have a thorough discussion and make a conscious and transparent decision based on social and actuarial rationale, in line with the growing public pressure on fair pay and reward.

This article appeared in our November 2017 issue of The Actuary.
Click here to view this issue
Filed in
11
Topics
Health care