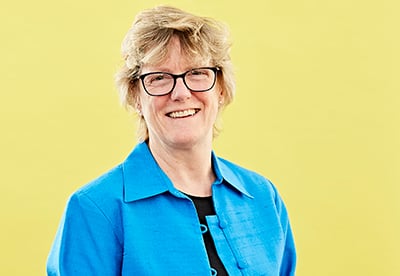 As chief medical officer for England, professor Dame Sally Davies is the principal medical adviser to the UK government. It's a role she has held since 2010, following a career that has seen spells in both clinical practice and the civil service.

Arriving to conduct the interview, we are shown into Davies' office, deep within the confines of a government building in Whitehall. As we enter, a helmet and high-visibility jacket catch our eye on the coat-stand; as if to symbolise that Davies is ever ready to do battle; whether it's persuading ministers to take action, driving change across the public health and medical system or conversing with the media.

Davies sees the key objectives of her role as being "apolitical and working to protect and improve the health of the public and patients within our system as we have it".

She admits it can be challenging, especially when operating in the context of government policy she doesn't always agree with. Davies navigates this "by being very evidence-based, because if you have the data, the statistics, the randomised controlled trials, it is very difficult to disagree".

A lot of Davies' work is behind the scenes, trying to shape policies and thinking, rather than in the media spotlight. As she puts it: "If you want influence, you have to build social capital."

Davies has been at the forefront of the UK's efforts against antimicrobial resistance (AMR) and when we ask whether the actuarial profession should be worried, she states quite simply, "yes". Davies explains how things have changed, and reflects on her time as a doctor on the frontline: "I did see infections caused by bacteria and other pathogens that were resistant to drugs. But there were always other drugs to substitute so that people didn't die."

We know in more recent times though that the death rate is steadily rising. Davies notes that: "AMR does not have a public face, because families just know about death by infection. Rarely do they know it can be due to a drug-resistant infection caused by AMR."

There is a lack of exact data on the scale of the problem, but Davies explains: "Current estimates are 25,000 deaths annually in both Europe and the US. Globally, it's 700,000, owing to drug resistance in bacterial infections, malaria, HIV/AIDS or tuberculosis."

We discuss how AMR can be tackled. Davies believes that it is a problem that can only be dealt with successfully through international co-operation, adding: "Infections know no borders."

However, she believes the domestic picture is an important first piece of the puzzle. Davies explains that we need to reduce the use of antibiotics to only essential cases, and points to examples where an antibiotic is prescribed by a GP for a sore throat. Davies notes: "The evidence is that only one in four of those patients truly needed it."

In terms of progress in the UK, Davies is pleased with the recent reduction in human use of antibiotics by 2% and animal overuse by 6.8%, but explains that we still have higher levels of drug-resistant infections compared with both the Swedish and Dutch hospital systems. To make further gains, Davies believes, would involve "exceptionally strict infection prevention and control", and suggests practices like "obsessional hand hygiene" will help. More broadly, she believes: "We need infection prevention and control, good vaccine programmes, to only use antibiotics when we need them, and we need to reinvigorate academic medicine and discovery."

On the global effort against AMR, Davies explains: "You have to get all countries doing this in concert." However, she notes that countries are currently at different stages. "In Britain, we have superb surveillance, we understand the degree of the problem to an extent, we measure it, we keep an eye on it and we know how antibiotics are being used, although of course there are areas, such as the environment, where we can do more. Some countries don't have the resources to determine whether they have a problem, so we have to support them."

We discuss how the UK can provide help to other countries. Davies says: "Within our foreign aid budget, we have a fund of £265m to help build laboratory capacity and another fund to help countries develop their international health regulations." She explains: "We do this for solidarity - and also to protect the British public. If, in those countries, infection levels are reduced, antibiotic use is reduced and AMR is reduced, they will not spread here."

Another concern for Davies is childhood obesity. Although noting that many children have genes that predispose them to obesity, she also believes: "If they did not live in our modern obesogenic environment, ate sensibly and took exercise, they would not be obese and they weren't in the past. The genes haven't changed over the years, it's the environment that has changed."

Davies points to the root causes of childhood obesity - for example, availability of fatty foods, advertising and price. She believes any solution is complex though, and that "there is no silver bullet". One dimension, which Davies believes adds to the complexity, is that "obesity is worse in the lower socio-economic classes, where they have less opportunity to live healthy lives". Besides obesity, Davies sees the risk factors for lower socio-economic groups as: "Higher levels of smoking, less exercise, and more binge drinking." We ask her what we can do as a society to manage these lifestyle factors to improve lifespan.

Davies clarifies that she is only interested in adding many more years to life if they are healthy. She continues, that when making any changes to lifestyle, "we all have to do it for ourselves, but it is very difficult". In terms of supporting this, Davies suggests that "better placement of foods in supermarkets, changing advertising and how we label things" would help. She also points to the success of dedicated cycle lanes in London, which have encouraged more people to get active. When it comes to smoking, Davies believes that NHS smoking services are still proven to be the most effective way to help people to quit.

The role of employers

The conversation turns to the role of employers in improving the health of the nation. Davies explains "there is a big role for employers", whether it is supporting healthy lifestyles or tackling mental illness. She places the cost of ill-health among those of working age at around £100bn a year, mainly from lost output because people are not in employment. Davies argues it is cheaper in the long run for employers to put in place preventative measures, such as counselling, for those who are suffering from mental ill health, financial difficulties or experiencing bullying at home.

Similarly, Davies believes providing cycle racks and making sure canteen food is healthy can make a significant difference. She calls on employers "to take health at work seriously, not just as a social exercise but because it pays off".

We turn to the role of regulation and ask to what extent it can help to improve health. Davies responds: "I think it depends on the issue. The seatbelt legislation was excellent in reducing injuries and fatalities. The legislation on banning smoking in public places also worked. The evidence from Australia is that the standardised packaging of cigarettes was a clear winner. If we can find clear wins, we should look at them."

When it comes to guidelines, Davies says she is a great believer in information being easily available. "Telling people that they 'must' do something doesn't work." Referring to the CMO alcohol guidelines, Davies explains: "I wasn't being a nanny, I was telling people what the evidence shows. It is their choice whether to heed it or not."

Davies is also open to using behavioural approaches like nudging to drive change, whether it is placement of food in supermarkets or how easy you make it for people to walk or cycle to work. She believes: "We need to use everything and consider what is the right thing for society or our community at any time."

Davies has recently been in the media regarding her widespread view that DNA testing can result in better treatment for NHS patients. With the Association of British Insurers' Concordat and Moratorium on Genetics and Insurance due for review, we ask Davies her view on what more widespread DNA testing could mean for UK insurers.

She responds: "The current moratorium means that the results of a predictive genetic test will not affect a consumer's ability to take out any type of life insurance up to £500,000 or critical illness cover up to £300,000. Below these amounts, insurers will not use adverse genetic test results unless the test has been specifically approved by the government - for example, for Huntington's disease."

She explains that, at the moment, only around 3% of policies sold are above these limits. Davies understands insurers' concerns that increased anti-selection could result from more widespread DNA testing, but feels the risk would be minimal with current genomic testing. She adds: "The science is still in its infancy, and genomic testing needs development with more evidence and understanding." This can, she believes, lead to the genes telling a story of whether a medicine works for a particular individual or is potentially unsafe. It could help get "the right medicine to the right patient".

In terms of the moratorium, Davies explains: "I have advised government I would stick with the moratorium." However, she does agree: "More widespread DNA testing will mean the levels of cover in the moratorium will need monitoring so that the public are reassured about not having to disclose genetic information for (most/95% of) insurance policies."

Big issues and tips for the actuarial profession

We ask Davies what her big concerns are as chief medical officer. She reiterates that AMR is one of her pressing concerns. She adds: "Infectious epidemics worry me, whether it's the flu pandemic of 2009, or Ebola, or Zika. It's not 'Will it happen?' but 'When, what and how severe?'."

Lifestyle and behavioural issues such as obesity, alcohol and smoking are also high on her list, and how these affect the poorer members of our community, making their lives increasingly difficult, and in general giving them a worse quality of health in later life.

Lastly, we ask Davies what advice she would give to the actuarial profession. She believes that actuaries have got to be very careful, as she has been, to assess the evidence presented over the long term. Davies adds: "People who publish go in fashions - we had a fashion that fat was bad. It's now swinging the pendulum the other way, that maybe fat is good. The answer is probably, as my mother always said, 'moderation in all things'."

You can view the IFoA Spring Lecture 2017 by Dame Sally Davies at bit.ly/2wmSbcz

This article appeared in our October 2017 issue of The Actuary.
Click here to view this issue
Filed in
10
Also filed in
Interviews