Although not exactly a new book (first published in 1950), Foundation had a recent paperback edition released in September last year and is well overdue a review from an actuarial perspective. 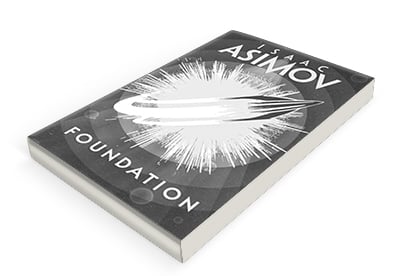 Although not exactly a new book (first published in 1950), Foundation had a recent paperback edition released in September last year and is well overdue a review from an actuarial perspective.

It is an unfathomably long time into the future and the Galactic Empire is at its peak - or is it? Hari Seldon, hero of the series and mathematical genius, thinks otherwise. His science of psychohistory combines economic, sociological, political and statistical theory to predict 30,000 years of chaos and he is on a mission to reduce that to a more manageable, but still ultimately depressing, 1,000. He needs funding and a long-term plan, which is why he sets up the 'Foundation'; a scientific outpost on the edge of the galaxy to document all human knowledge and subsequently kickstart the recovery after the collapse of the Empire.

This is no gun-slinging space opera, but more an application of actuarial theory at the largest possible scale: Why make only financial sense of the future, when you can model everything the future has to offer? After all, as one of the protagonists says: "Any fool can tell a crisis when it arrives. The real service to the state is to detect it in embryo" - a thought particularly reminiscent of the global financial crisis.

Seldon's model follows three main theories and a level of data credibility that puts even the internal model requirements to shame: (1) The population under scrutiny is oblivious to the existence of the science of psychohistory. (2) The time periods dealt with are in the region of three generations. (3) The population must be in the billions (± 75 billions) for a statistical probability to have psychohistorical validity.

Although never really explaining how this invented science works, Asimov appears to be describing stochastic modelling, but with hundreds of thousands of parameters and assumptions, a bit of AI and an indescribably large amount of computer power.

This first book puts the Foundation's wheels in motion and describes the first few hundred years of predicted future-history. Only in subsequent books do we see what else Seldon has planned, for when the future doesn't exactly go as his model predicted. It isn't quite a spoiler to say that he has some contingency plans, not least the even more mysterious Second Foundation at the other end of the galaxy.

Is it a good book? Many people would say it is a classic, but reading it almost 70 years after publication, it does feel dated. Asimov's portrayal of women is shallow (barely visible as supporting characters), although that does improve with later books in the series (the last published in the 90s). The book frequently jumps forward in time, introducing a set of new characters just as you were getting used to the last set, but this is partly because the first trilogy of books was actually a collection of short stories written over eight years and published in Astounding magazine. However, it is a short book and therefore certainly worth a few hours of your time.

As a young mathematician, this book made quite an impression on me. Did it inspire me to be an actuary? No. But was there a part of me that thought back to Seldon and his vast projection model? If it had, I would be in good company - Nobel prize-winning economist Paul Krugman claims: "I grew up wanting to be Hari Seldon, using my understanding of the mathematics of human behaviour to save civilisation." That's quite the endorsement.