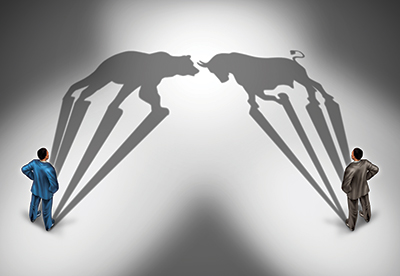 Although markets regularly have periods of falling prices, it seems easy for trustees and other financial professionals to focus on the upside, directing relatively little effort towards spotting the next crisis.

The fundamental causes of financial crises are often rooted deep within human nature. So how do we better manage investments in the face of this uncertainty?

Like many investors, trustees know that stock markets are prone to periods of rising or falling prices, often referred to as 'bull' or 'bear' markets respectively. These can affect individual asset classes, or else be more widespread, although generally a bull or bear market would be taken to refer to equities unless otherwise qualified. For investors, these are a source of great concern, since a stock market crash can result in a decline of 25% or more in real equity values. Markets often appear to be driven as much by sentiment as by economic reality, and, as suggested by US Federal Reserve board chairman Alan Greenspan during the dot-com bubble of the 1990s, can suffer from 'irrational exuberance'.

Stock market values are perceived to be linked to economic cycles, but since market participants seek to anticipate investment opportunities ahead of competitors, markets are forward looking. To be forward looking, investors must make judgments and forecasts about economic and investment outcomes with incomplete information. This results in the likelihood of error and decisions coloured by human psychological and behavioural biases. With many market participants, a wide range of views are generated; not all of these can be correct.

Even if 'normal' economic cycles could be predicted from interest rates, unemployment and other data, national economies are subject to external influences from foreign countries via trade, decisions made by their governments, and wider geopolitical events. Some countries may be 'serial defaulters' on their sovereign debt - they tend to over-borrow during good times, leaving them vulnerable during the inevitable downturns.

Governments can be prone to treating favourable shocks as permanent developments, fuelling a spending and borrowing spree that eventually ends badly. Alternatively, financial innovations can appear to render illiquid assets more liquid, permitting them to command higher values than previously, such as during the US subprime mortgage crisis of 2007.

In fact, it is possible that the complexities of financial markets make them prone to fingers of instability that extend throughout the system, making them capable of amplifying small events with potentially catastrophic consequences. Financial markets may be 'chaotic' systems, meaning that they are extraordinarily sensitive to tiny influences. Economist Hyman Minsky also pointed out that stability leads to instability - ie, long periods of stability can lead to debt accumulation until dangerous levels of leverage are reached.

Secular trends can also significantly change the investment landscape, creating new opportunities while undermining others. Market practitioners generally have a range of opinions, while some may correctly anticipate trends others will not. Further, the results of elections or national referendums may turn slight popular biases into clear-cut outcomes, which can come as a surprise to the consensus view. Examples of secular trends include:

Human nature often seems to lead to the over-anticipation of future developments (both good and bad) and exaggerated valuations.

The fickle nature of human confidence plays an important role. People tend to prefer simple explanations, and prefer any explanation rather than none - unfortunately, that does not mean such explanations are correct. Leaders in the financial sector may believe that their innovations have genuinely added value and underappreciate the risks their firms are taking. Alternatively, financial product providers may be responding to inappropriate incentives in less well regulated areas. Almost all bubbles require some form of new financial technology or financial engineering.

One economic role that governments play is to maintain a balance between producers and consumers to assure fair market prices. However, other forces are at work in politics, with constituencies attempting to influence governments either through money, polling or petitioning. Governments respond to political influences both to silence critics and because these actions help them stay in power. Market events can also provoke responses from financial authorities, which, although intended to address current difficulties, are likely to sow the seeds of future problems - for example, quantitative easing. The resulting outcomes can lead to financial bubbles, caused by governments creating artificial criteria to achieve political goals. Governments can exert their power over financial markets and on public thinking in ways that can set things up for a future disaster.

Managing portfolios in the face of these considerable uncertainties is challenging. The risks are unlikely to be captured by conventional risk measures (such as volatility, or value-at-risk), however, stress-testing portfolios may be able to help. With support from portfolio managers, trustees can identify particular issues associated with these risks and construct scenarios of possible outcomes that attempt to quantify asset movements. If test results affect portfolios to an unacceptable degree, they can be restructured to make them more robust to the scenarios considered.

Anticipating market crises is not easy; their complexities may make them capable of amplifying small events with potentially catastrophic consequences.

Financial professionals have to overcome their in-built human biases, as well as political and economic systems that can leave markets prone to periodic crises. Given difficulties with anticipating such crises, along with other market practitioners, trustees should be constantly on the alert, particularly during quiescent periods when everything seems to be sound and markets are generating consistent positive returns.

It may be difficult, but portfolio managers and trustees should be attempting to form judgments about the likelihood of developing market crises.  Such conversations should help ensure that clients have a more complete and realistic understanding of the risks their investments may entail, and facilitate a better discussion around portfolio investment allocations.