Where are UK property prices heading?

Weve all got used to house prices moving ever upwards, but the picture is starting to change. Richard Silveira looks at how a future housing market might play out 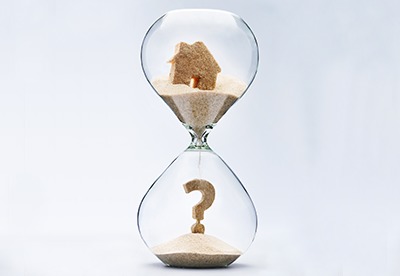 Property prices in the UK have been rising for decades - exceptionally so in the past 20 years. The relentless increase has been driven by a continual fall in interest rates: mortgages are cheaper and valuations are higher (see graph, below). However, just recently, sales have stalled and prices are static. So what comes next? Disregard projections from estate agents, surveyors and retail banks: they have too much of a vested interest. Disregard, too, the work of any institution that forecasts prices in a mathematical framework. Humans are not rational agents and property is not your average asset. It is illiquid, cannot be shorted and is subject to the ambitions of politicians. The best we can do is address supply and demand, and how they might change.

On the supply side, property is intrinsically limited. The population is growing and housebuilding lags far behind. Government policy and nimbyism (not in my back yard) don't help. Asking prices are relative - that is, more than what the neighbour's house sold for last year. So a single transaction can therefore ratchet up expectations in an entire neighbourhood. The price of newbuilds is similarly benchmarked against last year's sales figures.

On the buyers' side, commentators often talk of pent-up demand for housing. A caveat is needed. Actual demand reflects both the will to buy and the means to do so. The former abounds, while the latter does not. With available mortgages at around four-times earnings and house prices averaging more than seven-times earnings, the demand from first-time buyers is almost non-existent, even with help from the bank of Mum and Dad. The demand from buy-to-let (BTL) investors has dried up, with increased stamp duty payable on non-primary residences, and with Brexit uncertainty and political risk, foreign investment is falling, despite weaker sterling.

The market is in a stand-off. Sellers are holding firm for the best price. Some buyers are, too, while many who want to buy cannot afford to. Expectations are mixed. The bricks-and-mortar sentiment, ever present since Thatcher ignited the property obsession, is waning a little. Even the Conservatives are moving away from a vision of homeownership for all.

In a sense, expectations are now less important. The bigger change may come from necessity. The impact of the four-year phase-in on BTL restrictions is uncertain. Professional landlords may switch to limited companies, but many smaller investors will sell, particularly if presented with a large and unexpected tax bill. Brexit will also play a role. Well paid individuals moving back to the EU are unlikely to hold onto their houses.

The government's flagship scheme, Help to Buy (HTB), is winding down - and, with it, potentially billions of pounds of taxpayer money from the market. HTB was introduced in 2014 with the intention of helping first-time buyers. With the scheme came variants on newbuilds: a mortgage guarantee from the taxpayer that enabled people to borrow with a deposit as low as 5%, and an equity loan of up to 20% (40% in London), with a five-year grace period before any fees or interest were due. The guarantee option ended in 2016, and the equity loan option is due to expire in 2020. While the scheme has been beneficial for housebuilders in the short term, there are questions over how the industry will cope when the state subsidy is removed in 2020. The central criticism of the equity loan is that it has increased prices on houses that would have been built regardless. What happens to the thousands of newbuilds that have been built on the implicit premise that HTB continues unabated? At the top end in London, a £600,000 property can be purchased with a £240,000 equity loan. No HTB equals no demand. The industry describes it as a cliff edge, and housebuilders may be left with a glut of new properties to sell. The experience of Ireland and Spain should serve as warning of the dangers ahead.

The elephant in the room remains the Bank of England and future decisions on monetary policy. Long-term yields, which influence mortgage rates, have been suppressed under the Bank's quantitative easing (QE) programme. Rates cannot stay this low forever and will rise when the central bank starts to normalise monetary policy. The FED - the central bank in the US - is already doing so, and the pound will weaken further if the Bank of England does not follow suit. Higher bond yields reduce valuations via an increased discount on future cashflows (rents). Higher mortgage rates hit affordability. For those buying a property at historically high prices and historically low mortgage rates, with the minimum deposit, the situation could be perilous. Negative equity might return. 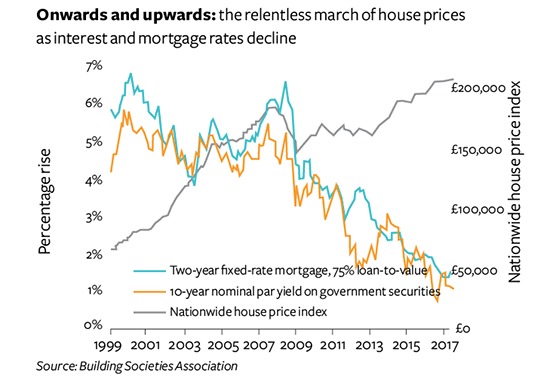 Broadly speaking, for a repayment mortgage with a balance of £200,000 and 20 years to run, every 1% increase on a variable rate mortgage would result in payments going up by £100 a month, or, £1,200 over the year. If the outstanding mortgage is £500,000, the monthly payments would go up by £250, equivalent to £3,000 annually. While personal circumstances vary, increases to mortgage rates of 2% or more would most likely lead to substantial numbers of homeowners in severe difficulty. The protection from rising rates provided by fixed-rate mortgages is partial at best - most fixed-rate deals are relatively short-term, so the impact is delayed only until the point when the fixed-rate deal expires.

Consider a BTL investor with rental income of £1,500 and a monthly mortgage of £1,200. Until April this year, the mortgage payment could be fully deducted against the rental income, leaving the difference of £300 to be taxed at the investor's marginal tax rate. By 2020, the full rental income will be taxed at the investor's marginal rate, less a 20% credit on the mortgage interest. This may push some basic-rate taxpayers into the higher-rate band. The prospect of higher taxes and a reduced margin, or even a loss, could precipitate a rush to the door, especially for those properties that are still yielding a sizeable capital gain versus the purchase price.

While one or two quarter-point steps by the Bank of England might be just about manageable, a genuine normalisation of base rates to historic levels would have a massive impact on mortgage affordability at current price levels. Prices have been rising for 20 years because demand and affordability have always been there via accommodative fiscal and monetary policies. As these policies unwind, expectations may switch towards a decline. But falling prices are likely to materialise only if sellers have to sell. Potential candidates include BTL investors, EU nationals leaving the UK, people facing the spectre of negative equity as rates rise, and housebuilders with excess new stock. If any or all of these scenarios come to pass, then the pressure to sell cascades to those who wish to exit the market at the current level, even if they don't need to sell.

If prices do start to fall, how might the government and Bank of England react? Both have been explicitly in favour of one-way increases in property prices, but neither is likely to be in a position to do anything should a decline set in. The central bank has run monetary policy to its limits, with rate cuts and prolonged QE, including 'looking through' retail prices overshooting the 2% target. To go further would sorely test the willingness of politicians, markets, institutions and the public to accept the bank's decree. And for government, there would likely to be strong opposition to extending its ownership and underwriting of private mortgage debt.

The arguments thus far have focused on downward price pressure. What of the opposite? Are there any reasons to anticipate continued, and perhaps strengthening, growth? Should none of the aforementioned events occur, then it's possible for prices to continue at their current level, and relative illiquidity plus scarcity could accommodate price rises.

But a rise linked to increased demand is difficult to envisage. There is a dearth of scenarios that would support a continuing increase in prices. Serious structural issues remain, including: stagnant wage growth in real terms, an ageing population and the costs of social care, and persistent inequality that reduces consumer spending on aggregate. One possibility is increased foreign investment in property, but that would rely on a post-Brexit environment where sterling is viewed as a safe haven. Given the complexity of the negotiations to come, that could take a while.

No-one knows where property prices in the UK are going - but you might want to think twice about buying right now.