Professor Aled Jones,director of the Global Sustainability Institute, talks to Richard Purcell about the climate change risks facing pensions and insurance and how actuaries can help 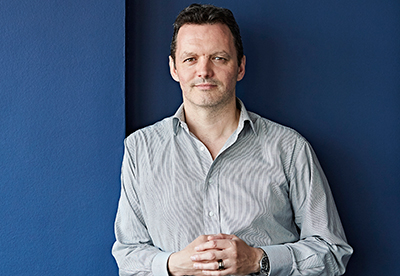 Despite his formidable nickname of 'Dr Apocalypse', Aled Jones is both genial and thoughtful when I meet up with him following his appointment as an honorary Fellow of the IFoA.

With a background in theoretical physics and mathematics and a PhD in astrophysics, he found himself irresistibly drawn to the application of mathematics in the real world, explaining, "one of the biggest challenges today is climate change, so that was an obvious place to apply some of my skills". It may seem like a leap from astrophysics to climate change, but Jones believes that: "It is the same tools, just applied in a different area. So the day-to-day is quite similar in the methods used."

We begin by discussing government activity on climate change. Jones has played an active role in working with government, including on the Capital Markets Climate Initiative, to understand the policy landscape in various countries. He explains one of the hurdles: "The policy environment for energy investment is very different between countries, and is changing all the time." If the system were to become more joined-up, he believes that private-sector players and organisations such as the World Bank wouldn't have to re-learn what the investment landscape looks like in each country, and this would encourage more investment. Certainly the investment gap seems a substantial one. Jones believes that if we are to reach the 2°C temperature target by the middle of the next century, then "total investment needs to go up by a factor of roughly three from where it is today". He puts the overall scale of investment at around $1trn (currently £770bn ) a year globally for the next 30 years.

Jones points to progress on investment, saying the level of investment in energy infrastructure is rising every year and that, in countries such as the UK, the cost of low-carbon technologies now makes sense without government intervention. Overall, though, he believes we are not doing enough to meet the 2°C target, and a big problem is that "no one actually knows what a 2°C temperature target means". He says that such a high-level target will not make a pension fund change its investment. What we need are the "finance, economic, technology and planning policies that underpin how we get there", he says.

He identifies Brexit as another potential roadblock in the UK: "A lot of environmental policy has been driven from Europe, and we cannot afford two years of not talking about it during Brexit," he says, adding: "The rest of the world isn't going to wait."

He is worried about what Brexit means in terms of the "significant risks in the short term around exactly what that means for the prices, access to, and the security of, food and energy". However, he recognises that Brexit could also present an opportunity for the UK to be a world leader in low-carbon, clean technology.

When it comes to some of the tools government can use to influence society, Jones believes regulation has a part to play. "Yes, we need more regulation. But not just any. It's the perception of government direction too. It's also less regulation in certain circumstances. We are good at responding quickly to underpinning North Sea oil exploration and adding in different tax incentives along those lines. So less intervention in the market would also speed up the energy transition in certain circumstances."

We also touch on the use of subsidies to encourage the right behaviours. Jones is critical of the UK government's 'feed-in tariff', which subsidised the installation of solar panels in individual homes.

He notes that it led to an unanticipated 4,000% increase in the use of solar in some regions, and the subsequent sudden removal of the subsidy. It was unsuccessful, he believes, "unless the objective was to massively increase the use of solar panels with no limit on the public purse". "What we need is something that is more dynamic and that can respond to market demand in a transparent way."

He adds: "The sudden removal of subsidies, rather than a planned, gradual removal, is not the best way of increasing confidence and trust between the public and private sectors."

Another policy raised by politicians recently is capping energy prices. Jones explains: "Energy costs have been essentially flat until recently. Stable prices for energy meant you could plan 10 or 20 years into the future what kind of production you would use. Now quality of extraction will go down and cost will go up." He is clear that "the cost of energy is only going in one direction. You can't put a long-term cap on energy prices, unless you get energy from somewhere else." He also acknowledges that an energy cap actually may hasten renewable investment, but believes "that is not the intention of what is being done with such a cap. It's not the best way of managing investment into renewables."

Some of the key environmental risks that Jones has on his agenda are food, energy and water. He considers them all "risks that are worrying, but all have different impacts".

Food, he explains, "is particularly worrying because it can happen at any point. There is not enough slack in the system. We produce just enough to feed everyone, although there is massive inequity in consumption and supply. If we were to have an extreme weather event, then there is no real slack or process for managing it globally that can provide an effective response." The consequences, he says, could include spikes in food prices and also the potential for massive societal unrest, and pressures on other countries because of migration.

He sums up: "Food is a really interesting short-term risk source. It has huge potential risks for insurance, but less so for investment."

Jones sees energy as a medium- to long-term risk for investments, because of the huge transition likely to happen either because of pricing or other geopolitical factors. Water is seen as an indirect risk via food or energy: "It's a question of how quickly we can invest in water solutions. There is plenty of water around the world. But how much energy do you want to use to make water useable for society? So it's linked to the cost of energy."

We begin talking about some of the considerations that pension schemes and insurers should be thinking about, starting with investments. In the transition to a low-carbon economy, Jones notes: "It is important that we don't create asset bubbles or stranded assets." For him, it's a question of understanding what the transition looks like in order to "manage the downsides of any transition, including unintended consequences on pension funds and insurers, and take any opportunities that a transition presents". One side effect to be worried about is the potential for greater inequality. "As fossil fuels become more scarce, the rents you can extract from them can be potentially much higher. It means that large asset owners investing in access to resources could extract more profit, and this has potential to drive inequality."

Jones calls on institutional owners of assets, such as insurers and pension schemes, to understand the indirect impact that an asset transition could have on inequality in society. "Fossil fuels could all become stranded overnight, depending on how government acts, and that is a huge risk." Instead, he believes that these investors should be "investing in more strategic assets that have a longer term, possibly lower return on them, but that give you more predictable profit and capital growth and don't have potential for increasing inequality". He underlines the importance of having a "transparent dialogue about investment exposure transition", which will allow us to continue to invest and have functioning pensions.

We turn to some of the risks related to climate change that are covered by insurers, a key one being flood risk. Jones believes we need to be much more open about who pays for risk management. "We continue to invest in flood defences, but at some point we are going to have to make a decision about strategic investment or withdrawing from certain infrastructure. Companies are already making these types of decisions now, but this has an impact on property values and where people live."

He doesn't believe we should subsidise flood insurance for ever, but he questions at what point we say it doesn't work and how we strategically withdraw. On the formation of organisations such as Flood Re, which acts as a national reinsurer for flood risk, Jones believes it delays the decision on when you should strategically withdraw from risky assets. "It's good to have a delay, otherwise it can create too many step changes in the market. But it's good only if you are using it to think long-term about when and how you withdraw," he says.

Lastly, we turn to the work that Jones has done with the IFoA and the 2013 report Resource Constraints: Sharing a Finite World, which pointed to some defined benefit pensions being wiped out in 35 years if certain climate scenarios played out.

"In that report, we were looking at resource trends, and what the potential impact of increases in prices, or lack of access to those particular resources, might do to the various factors we are interested in within actuarial modelling - whether that's interest rates or economic growth expectations," he says. "It is quite easy to come up with a scenario where you have limited energy resources, resulting in energy prices going up and asset values going down because investment returns are going down towards 0%. This could then wipe out some pension schemes over the long term." Jones believes the report challenges some of the assumptions used by pension schemes, given the potential resource limits we know are on the horizon.

Looking from the outside in, he says that when it comes to understanding environmental risks, the profession has "pockets of excellence, but it's just how you spread out that expertise, to make it become more of an understood risk by actuaries, just as longevity is".

He also sees lots of opportunities for the actuarial and academic communities to work together. "I am interested in the understanding of risk and, in particular, long-tail risk. It's an area where the academic climate change community and government are less well equipped.

"They don't have the tools and techniques to manage or understand the implications of what these types of risks are. So I think there is a lot that can be done in the way of knowledge exchange, with the actuarial profession learning from climate change academics, academics challenging the assumptions that actuaries make, and us learning from actuaries how you understand and model that type of risk. Actuaries can also help articulate these risks to decisionmakers."

With so much work to be done in understanding climate risks, and transitioning to a lower-carbon economy, it's clear from talking with Jones that the chance of success will be increased if all the different stakeholders - whether government, investors, academics or actuaries - work together more in an open and transparent way.

This article appeared in our September 2017 issue of The Actuary.
Click here to view this issue
Filed in
09
Also filed in
Interviews