A missing antidote to terrorism 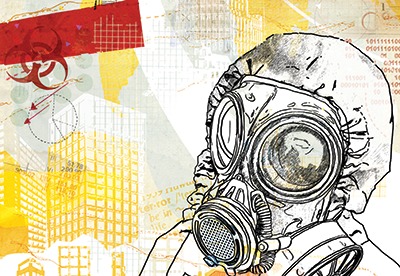 Current trends in terrorism emphasise spectacular attacks that combine lethality with media sensationalism. Further, acts of chemical warfare by both state and non-state actors in Syria and Iraq remind us that the spectre of chemical and biological (C/B) terrorism cannot be ignored.

The insurance industry provides limited terrorism cover and has understandable scepticism about providing cover against C/B terrorism. Coverage in the UK is provided by a small number of players, mostly Pool Re and a handful of Lloyd's syndicates. Other players consider that the substantial uncertainty around the risk does not match their risk-reward appetite.

Although the overall probability of C/B terrorism is hard to calculate, many observable or measurable factors either increase or decrease the probability or impact of such terror acts. Tracking these factors may help the industry to become more comfortable in assessing the risk and to make better decisions when providing cover. This article explores which risk factors aggravate or mitigate the likelihood and impact of such acts of terrorism, and how the industry can seize the opportunity to improve its risk assessment and offer increased coverage, including new forms such as business interruption cover and loss of attraction cover.

While the risk of C/B terrorism at any one time is hard to predict, the authors believe that relative increases and decreases in the probability and/or impact are detectable by monitoring various factors, including those identified below.

Ideology that focuses on property damage: In general, the historical record shows that chemical and biological terrorism is better at contaminating property than causing mass fatalities. For example, the Anthrax terrorism of 2001 in the US killed five people and also cost hundreds of millions of dollars in direct clean-up costs and possibly over a billion dollars in indirect losses owing to loss of business and loss of use of premises. However, the current groups of violent extremists (for example, ISIS, Al Qaeda, far right and others) are more motivated by causing death, injury or general interruption than property loss. A rise in ideological extremism motivated to cause property loss may find C/B materials useful.

Proliferation of material or knowledge: Indicators showing the spread of raw material (precursors), the means (ie specialty manufacturing equipment) or correct specialty knowledge would serve to increase the threat from C/B terrorism. It is worth noting that the internet contains examples of incorrect information on the manufacture of C/B materials. For example, publicly available 'recipes' for making the nerve agent Sarin are dangerous and unreliable, and certainly will not result in large-scale manufacture. Publication of faulty recipes or dangerous laboratory processes make actual use less likely, as time and resources may be devoted to pursuing erroneous methods of manufacture.

Efforts to prevent the spread of materials and/or knowledge are highly useful in preventing C/B terrorism. For example, there are worldwide efforts by international organisations and national governments to prevent trafficking of the raw materials for manufacturing nerve agents such as Sarin. Even in instances where these efforts do not prevent manufacture, they make it far more expensive, as procurement efforts are forced onto the black market.

Improved technology for biosynthesis: Biological technology is rapidly improving. Publicised improvements in biological synthesis are an indicator of likelihood of availability of biological weapons.

Lack of enforcement: Poor enforcement of laws or international norms may serve to increase the risk, such as the failure to enforce the 'red line' against nerve agent use in Syria. Likewise, derisory efforts to punish proliferators of raw material or minimal penalties for the same may also promote C/B risks.

Media exaggeration of effects of C/B weapons: Film and television exaggerate the visible effects of C/B weapons. Prolific occurrence of C/B weapons and scenarios, with unrealistically dramatic effects, may inspire attempts to use such materials. However, in reality, C/B materials have a mixed track record. Most attempts to use C/B materials have been complete or partial failures. The well reported uses of sulphur mustard gas by Isis have largely failed to have tactical effect and have caused a limited number of casualties. Some attempts, such as the Japanese cult Aum's efforts to use anthrax, were complete failures. If extremists see examples of C/B weapons not living up to their overheated reputation, then risk of use will be lower.

Evidence of testing effort: Most C/B weapons are difficult to fine- tune without testing. Mistakes may expend a group's inventory. Generally, effective weapons are the result of enormous trial and error, as shown by Cold-War-era systems. Evidence of testing, even with inert ingredients, is a threat indicator and will attract attention.

Improvements in countermeasures: For decades, governments and industry have been funding R&D efforts to improve countermeasures, such as detection, protection, medical treatments and decontamination technology. This serves as a deterrent to use and as loss mitigation. For example, the new Ebola vaccine deters the use of the virus as a weapon and would greatly limit deaths arising from such use.

Quantities: There can be a wide gap between theoretical toxicity and actual results. It often takes more material than generally assumed to provide widespread lethality or contamination. Terrorists will probably need more material than they estimate, adding time and expense to their efforts.

Evidence of rational economic decisions: C/B weapons are expensive compared with other forms of death and destruction employed by extremists. On a like-for-like basis, conventional weapons are orders of magnitude cheaper and months or years faster to procure. We can look for evidence of fiscal discipline in extremist groups, regardless of specific C/B context - evidence that extremist groups are spending resources in a tightly controlled manner, such as group leaders cracking down on unnecessary expenses or asking subordinates to justify routine expenditures. A group that tightly manages financial resources may be unlikely to sanction expensive excursions into exotic materials and unreliable outcomes, which are so often the case with C/B weapons, thus lowering the probability of an attack.

Effective enforcement efforts: Enforcement efforts in the C/B arena have historically had a mixed record. Improvements in this area are occurring around the world, both in terms of prevention and in response to incidents. For example, forensics are improving in many countries, including within the UK, with the ability to tie an attack to a perpetrator being vastly improved.

Incrementalism: Difficulty, expense of manufacture, shelf life and quantity requirements mean that extremist groups may not be willing to wait a long period of time to gradually accumulate stockpiles of material. There is likely to be an impetus to use whatever quantity is available right away. Smaller, less effective attacks are, therefore, more probable than a large, highly effective attack. Such smaller attacks, if they occur, work as a sentinel for the insurance industry, which can then adjust its approach accordingly.

Overall, the risk of large-scale C/B terrorist attacks is low but not negligible. It is important to look at the risk with proportionality. The factors above show that it is uncertain and expensive for a terrorist organisation to employ chemical agents, and the results may not gain the expected level of adverse effects. The insurance industry can do more to learn about C/B risks; in doing so, it has an opportunity to expand existing terrorism insurance product offerings to cover C/B risks.

A particular gap in the market is for business interruption or loss of attraction. This would be particularly pertinent for covering C/B terrorism, given the possibility of such acts to cause interruption to buildings as a result of decontamination or restricted access. Knowledge-based assessments can replace myths and misunderstandings if they are presently forming the basis of decisions. The authors believe that this may be the case in certain instances. Facts and knowledge are important to the expansion of the insurance industry, to pricing, to product offering and to identifying the best means of providing economic protection against terrorist risks.

As an industry dealing with risk transfer, given the potential opportunity that C/B terrorism coverage creates, we should start to think about how to best seize it.

Dan Kaszeta is managing director of Strongpoint Security. He is the author of CBRN and Hazmat Incidents at Major Public Events

This article appeared in our September 2017 issue of The Actuary.
Click here to view this issue
Filed in
09
Topics
Careers