Fuelling the future with sky-high premiums

Fuelling the future with sky-high premiums 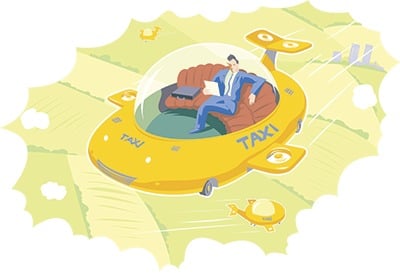 It's happening. It's finally happening. OK - not quite in the format that we expected. Not yet, anyway. More than 30 years ago, the film Back to the Future teased us with the prospect of flying cars and hoverboards taking over - and we have remained hopeful ever since. There are a few years to go before such vehicles become a means of everyday travel. But for a select few, these wonderful inventions have recently become accessible.

Ever keen to embrace innovation, Dubai is set to implement its Sky Taxi service in the near future, with Chinese aerial drone technology ready to transport passengers short distances to predetermined destinations - without a pilot.

The jump from football-sized drones to models large enough to transport an adult has exceeded what we've expected of technological advancements. Hoverboard prototypes continue to enter development, and manned jetpacks have also soared over Dubai - one of the largest cities in the world.

These vehicles offer unique selling points for consumers. They are fun, fast and flashy. The technologies of tomorrow seem to strike a balance between ostentatiousness and practicality. Manufacturers are beginning to elevate these prospects to beyond the status of just toys. Indeed, such labels soon may not apply, as they could start to affect our everyday lives.

It remains difficult to evaluate how accessible such modes of travel will become. But it would be even more incomprehensible to suggest that advancements in such industries might stop altogether.

However, this potential bright-eyed future raises several concerns. Air travel remains susceptible to devastation in a way that is continuously minimised in now-conventional land travel.

Car crashes and 'fender benders' happen every day, but should similar incidents arise during flight the consequences would be significantly more severe: debris damaging the ground, and accompanying sky-high mortality rates.

From an actuarial point of view, insuring Sky Taxis could be a pragmatic nightmare and should be approached with caution. Until efficiency can be proven and backed up by relevant data, insurance premiums will serve to quantify such caution - with a risk of high costs being passed on to the consumer or the manufacturer.

While Sky Taxis might deter conventional industry participants for a time, the market for insuring self-driving cars complies with the typically risk-averse nature of insurance companies. And as machine-learning elevates the abilities of self-driving vehicles above those of the average man or woman, the risk of accidents creeps down - and fewer crashes translates as fewer claims.

This does not mean that budding young actuaries in the car insurance market should panic about their future. The logistics and legislation remain up in the air while cars stay on the ground - for now. It does, however, present an opportunity for innovative, tech-savvy actuaries to spot a gap in the market and design new insurance products for the changes on the horizon.Self-driving cars will almost certainly become more widely used than manned air-based drones - but the latter should not be ruled out.

As for the legislation that will need to be implemented before self-driving vehicles can become widely used, the UK government is still building a consensus.

 Should the driver remain ready at all times to take over a faulty self-driving car?

 With whom does the blame lie if a self-driving car instigates a crash? The purchaser? The manufacturing company?

 How susceptible to external hacking attacks would these vehicles be?

 Can we trust a car to self-drive itself better than a person could?

But as the mileage counters rise and rise, doubts regarding safety and trust will only be quelled. The vehicles are well on course to outperform the average human driver.