An Actuary with Purpose

Wilhelm de Wet established a recruitment agency for actuaries, called South African Actuaries Abroad or SA3, a thriving career networking and placement hub which he could run from anywhere in the world. They chose a small town, Bonnievale, two hours drive from Cape Town, a place where they could live a quality life and raise their children in a healthy lifestyle. As they would discover, this life in Bonnievale was to be far from boring.

Wilhelm de Wet (FIA, FASSA) and his wife, Helena, returned to South Africa after a 3 year stint in the UK in 2005, where he worked for Prudential in Financial Reporting. Wilhelm established a recruitment agency for actuaries, called South African Actuaries Abroad or SA3, a thriving career networking and placement hub which he could run from anywhere in the world. They chose a small town, Bonnievale, two hours' drive from Cape Town, a place where they could live a quality life and raise their children in a healthy lifestyle. As they would discover, this life in Bonnievale was to be far from boring. 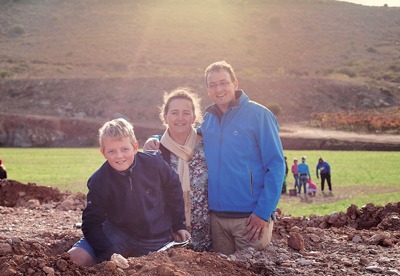 They realised that one can live a solitary life in the city, but in a place like Bonnievale, life is interdependent and you are needed in so many ways in this close-knit community. Bonnievale is a picturesque town in a scenic agricultural valley of sprawling vineyards, wine, milk and fruit, yet apart from a hand-full of agro-processing facilities and businesses the local economy is not strong and the vast majority of the surrounding 12000 inhabitants live in under-resourced conditions.

"My business is very blessed and SA3 is favoured for it provides a service of reliable integrity to bench mark companies in our industry. I believe strongly that we are blessed to be a blessing and of those who have received abundantly much will be expected. It would be against my convictions to live for myself or to accumulate wealth for no purpose," says Wilhelm.  Speaking of conviction, it is faith that lured Wilhelm far away from the confines of safety when he realised the desperate need for a new high school in Bonnievale, which made him decide to step out and pursue the seemingly impossible vision.

For Wilhelm as actuary the statistics showed a clear graph of increasing hopelessness in the local community. The local high school offered only 350 school desks, while the need is for 1500 learners to be accommodated. The Western Cape Education Department (WCED) was not in the position to prioritise the building of another school, and a private school with paying parents was not a sustainable option, as more than 90% of the learners would come from a background of extremely low income. However the WCED was willing to allow the establishment of a new school and fund the bulk of the teachers if the community and private sector would contribute the land as well as 60% of the establishment cost.

Wilhelm joined forces with an engineer (Curren Kuhn) and a winemaker (Philip Jonker), who formed the JGE Funding Trust, responsible for the 60% private contribution, equating to about R55m million Rands (£3.2m). These trustees were tasked to not only raise the funds, but also to manage the building project with a master plan for 1200 learners and to govern the school in the long run. Added to a long list of practically impossibilities, was the fact that there was a timeline set of less than two years.

Wilhelm and the team took the challenge. They were convinced that this vision was not only to accommodate the numbers of the poor, but they clearly saw a high school of excellence in a spacious campus-like atmosphere, with top facilities and inspirational leadership, to heal a total community from a legacy and lifestyle of brokenness and lacking self-worth.

"We knew that what we were about to take on was impossible, but we stepped out in faith, believing that there are enough like-hearted people out there who would contribute." Wilhelm, Helena and his sister/business partner Henda Pretorius (also an actuary) sacrificed their savings and contributed financially, as well as investing extremely valuable time. 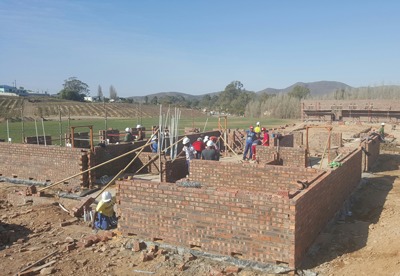 A beautiful 12 hectare wine farm was identified and Wilhelm and Helena invested their personal capital to acquire half the land for the JGE Funding Trust. The other half was donated by the current owner, Philip Jonker. They had a clean canvas to plan the school on and with community input decided on a modern technical school with cutting edge e-learning facilities. The reality is that a large proportion of the learners do not have the means or support to advance to tertiary education, thus a two stream school is created, one stream to produce professional engineers, architects and agro-scientists, and another stream for technical artisans. Curriculum expert, Prof Gustav Niebuhr, says about the subject choices "What you are doing is the answer for South Africa." The Western Cape Minister of Education, Min. Debbie Schäfer, announced the new school in parliament and described it as "awe-inspiring". It is seen as a possible blue print for education in South Africa.

The team left no stone unturned to raise sufficient funds in time. Internationally listed local company Naspers gave the first million Rand. It's a team effort. Wilhelm focused on securing finances, while the team of trustees worked tirelessly to get the job done with the little they had in hand. The architect, civil engineer, electrical engineer, mechanical engineer, land surveyor, attorney, land use consultant and project manager were all willing to sacrifice professional fees and to work pro bono towards this vision. Local community members offered their time and sweat after hours to take out vineyards in order to stay ahead of fourteen earth moving machinery offered free of charge by a local earth moving company who was asked to move 25000 cubic meters of rocky soil. They had to prepare the footprint for the three sports fields, eight lane athletics track, five netball/tennis courts and buildings. Shoulder to shoulder people from all ages and cultures in Bonnievale joined forces to work on Saturdays in inspiring harmony. Private donations were made, businesses bought in, trusts gave money and local building contractors worked together on very favourable terms and are willing to sacrifice profitability for this vision. "Positivity is infectious. Sacrifice is inspirational. When we lead with a can-do attitude and show our commitment by sacrifice others will follow."

By the end of June 2017 the team had raised more than R39m (£2.3m) in contributions, mainly in the form of free or discounted professional services. "Our faith was tested when permission to build was granted very late and we had to proceed by enrolling learners and appointing the principal and deputy without a brick on site." There were a number of hurdles, but with passion, faith and determination and an actuarial attention to detail they cut through all the red tape. Permission to build was only granted with six months left to execute the construction plans for phase one. Now everything is on time. Only just. It will be a clear record.

"Wilhelm says, "The fact that every step of progress seems to happen on the deadline keeps us humble and on our knees. Nothing happens too early. We do not receive more resources than needed. In fact, we still have a significant shortfall, but we proceed in faith. Our necks are constantly on the line. With front-row seats, we have been privileged to see this vision materialising over the last 18 months." 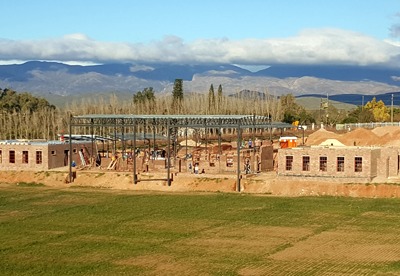 Between SA3 and building the school, Wilhelm is juggling a number of responsibilities. "To me family is priority. You can juggle many balls and think you are successful yet one ball is made of glass - that is your family - if you drop that one you have failed." Wilhelm and Helena have four children: Christiaan (12), Van Wyk (10), Janien (7) and Wilhelm (1).

The new school is called the Jakes Gerwel Entrepreneurial School. A person like the late Prof Jakes Gerwel remains an inspirational role model, the son of farm workers who became a great South African leader and confidant of Mr Nelson Mandela, whilst through his secure character and powerful humility never felt the need to draw the limelight on himself. His character will inspire the learners of this school who will become the leaders of the next generation.

"Most learners come from under-resourced backgrounds, fatherless homes and broken family structures. Secure character is what made Jakes Gerwel a world changer behind the scenes. In this school our first priority is to invest in the character of the learners. We do not only want to broaden their vision. We want to broaden their shoulders too. It is a vision to restore a whole community."

Wilhelm says, "We hope this will serve to inspire everyone in South Africa and further afield. We do not run or hide from negativity. We thrive within brokenness because this is what we are called for, because we are here to heal, to make a difference."

"The Jakes Gerwel Entrepreneurial School is currently being constructed and is swiftly becoming a reality. The doors of JGE open in January 2018. We are about to see what we believe. Amongst the many initial comments of 'But this can't be done' and 'Impossible' and 'You are crazy', we have yet to meet the person who has not received this vision with great positivity. In retrospect, all the seemingly impossible factors will simply give depth to this beautiful story of hope."

The Funding Trust requires another R4million (£230 000) for completion of Phase 1 before the end of 2017. For Phase 2 and 3 of construction in 2018, another R11million (£650 000) is needed apart from an annual running budget of about R3million (£175 000). UK contributions towards the JGE Funding Trust can be made into the account of King's Church International, Windsor, with the following details:

Contributions to Kings Church International qualify for Gift Aid on completion of a Gift Aid form.