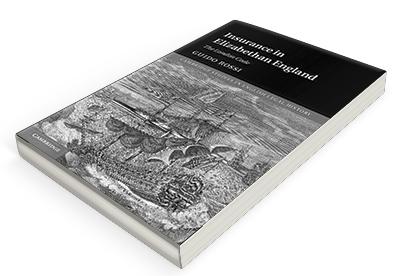 This is a substantial book of nearly 900 pages. Just over half of it consists of a detailed discussion of the terms of marine and life insurance offered in Elizabethan London. The remainder conveniently gives full transcriptions of the London Code - the rules covering marine and life insurances after about 1580 - and 46 surviving marine policies issued from 1523-1604. These include the life policy of 1583 taken out by Richard Martyn on the life of William Gybbons for 12 months.

The book is written from a legal viewpoint. It traces how the London Code was partly derived from various similar codes in European towns such as Antwerp, Barcelona, Bruges, Genoa and Rouen, and shows which provisions were original to London. The book outlines what the author sees as a continuing struggle for jurisdiction over insurance matters between the official British court system and the Assurance Chamber of London, where the commissioners were usually merchants appointed by the City's mayor.

An analysis is given of the 40 known London policies for the years 1573-91. The average sum insured was £506, while for 62% of the policies the sum insured was less than £400 and for 5% it was £1400 or more. There was a small group of about 40 underwriters whose names cropped up at least five times and who may, therefore, have had the greatest influence in the market, but there were about 200 other underwriters who were named less frequently and often once only. The number of underwriters on each policy varied widely, from three to 47. Table 3.2 sets out the premium charged for each of 24 voyages which took place from 1579 to 1593. The lowest premium rate was 3%, or in one case 2% for a short voyage from Harwich to London, while in the four cases from November 1586 onwards the rate was 10% or 11%, reflecting increased international tension.

For anyone who wishes to have a good idea of the rules of the Elizabethan London insurance market in the various contingencies which could arise to a ship or cargo, the book will be of great value. It does not, however, throw additional light on life assurance at that time, the rules of which are already well known.