Are you a pusher or a puller? 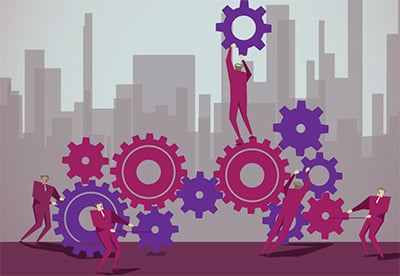 In work, persuasion and influence is big business. It's the stuff of deals and the lubricant for smooth-running relationships. Every day you find yourself having to convince people to do something new or different. If you're the CEO, it may be the challenge of presenting a credible strategy to your senior managers. As a project manager, you need to influence stakeholders to get their buy-in. As a team member, you might need to persuade your colleagues or your boss to change tack. As a manager, you have to call in some favours with your subordinates to work late. Your effectiveness at influencing others will impact how people judge you, your chances of promotion, whether or not your ideas hold sway, your ability to engage colleagues, the quality of your customer relationships and your capacity to lead a business in all weathers. Persuasion and influence are mission-critical skills.

In a small study of 100 professionals, the most common answer to the question: "What does influence or persuasion at work mean to you?", an overwhelming 76 people answered: "Getting other people to do what I ask." What this demonstrates is a lack of understanding of both the scope of persuasion and the opportunity for using different influencing strategies. It also illustrates the lamentable fact that most of us are convinced by our own sense of rightness; our own ideas are the best.

The academic research on influencing highlights as many as nine different styles. Most of us has a default style, one we feel most comfortable using. However, to be effective in our influencing, we need to be able to select the most appropriate style and execute it well.

The two most frequently used styles are 'Push' and 'Pull'. Each style is behaviourally distinctive and each is appropriate for different situations. The Push style is this:

1. I have an idea or opinion that I share with you

2. I tell you the reasons why it's a good idea and/or why I'm correct

3. You agree and you move your position.

Behaviourally speaking, Push style is characterised by three specific verbal behaviours: Proposing content (suggesting an idea); giving information (providing the rationale); and shutting out (talking across others). The solution comes from the influencer and it's the influencer who does most of the talking.

Push style persuasion is the most commonly used. Our education system is built on the rationale that logic is persuasive. Moreover, professions steeped in technical detail, for example: actuarial, legal, accounting and engineering, show a natural inclination to the Push style. And yet it's only effective around half the time.

Sometimes the lack of success can be because we are apologetic in our pushing, going around the houses, rendering the message unclear and potentially confusing. Another weakness is being a misjudged Pusher, where you reveal your solution early. In so doing, you underestimate the strength of resistance you will encounter. What seems clear and convincing to you fails to shift your audience. You may become frustrated and try another round of blinding your target with logic, either bludgeoning them into submission or leaving the encounter feeling exasperated. Either way it's a win/lose outcome at best. In an environment where technical expertise is prized above all else, the aggressive pusher can also surface, only to lock horns with an equally aggressive colleague or client, pitting their knowledge one against the other. Being right isn't necessarily persuasive.

Push works well in conditions where the influencer has positional authority. As a boss, manager or team lead, there will be times where Push serves you well and satisfies your reports. Other situations that call for Push include where you are recognised as having the greater expertise, where there's only one solution, where the decision has already been made, where decisions need to be made quickly and when you can enforce compliance. Yet how often do you adopt a Push style when none of these conditions apply? No surprise then that your attempts at persuasion are less than successful and perhaps have unintended, negative consequences.

Take Simon for example - a middle manager in a professional services firm. He needed to create a new direction for his team, some of whom were peers. In doing so, he articulated a clear, coherent plan and instructed each of his team as to who would do what, and by when. For him, the logic was clear, the detail was exemplary and he was in charge, so the team was bound to agree. Push style was a no-brainer. However, Simon had overlooked a fundamental question: How important was it that he gain everyone's commitment to the plan? If engagement is essential, then a Pull style is much more likely to work.

Pullers use three behaviours in particular: Seeking proposals (How should we best do this?) seeking information (Who has the relevant experience?) and the rare but highly prized skill of building; extending or developing a proposal made by another person. Building is used much less frequently than is warranted, usually because the persuader is more interested in his own ideas and fails to harness others' suggestions.

If Simon had focused on engaging his team, he would have used this Pull style:

1. Simon asks the team for their ideas

2. They offer some options

3. Simon then asks questions to explore their suggestions

4. Simon builds on their suggestions

5. Together, Simon and the team agree a way forward.

In this way, the level of commitment of the team increases in line with their engagement.

A pull style can also be effective when influencing upwards. After all, it's not easy to tell your boss what to do. Yet people rarely have the confidence or the patience to (pardon the pun) pull it off. Other conditions that cry out for Pull include: where resistance is likely to be high; when there's more than one option or solution; when there is no time pressure; where any movement is better than none; and in coaching others to use their resources. It's also useful in fostering collaboration which is fast becoming a critical capability in the world of work. Multiple heads are better than one.

Pull might take a little longer to execute but the rewards outweigh the costs. For example, in a recent performance appraisal discussion, Sian wanted to convince Tom of the need to work on his client-facing presentation skills.

If she had defaulted to a Push style she would have told Tom what she wanted and why. Instead, using a Pull style she was able to get a better understanding of why Tom's presentation skills weren't where they needed to be - the underlying need, not the presenting issue. They explored options for addressing the shortfall and Tom was committed to the outcome. The effort was worth the gain.

Similarly, John wanted to convince a client to review his attitude to risk. Using a Push style, John could have explained what he wanted the client to do, supported by the various reasons why he (John) thought this would be the right strategy. Instead, using a Pull style, John led with questions to help his client explore his attitude to risk, the potential downsides of the status quo and the upsides of exploring a different mind-set. As a result, John took his client on the journey rather than landing him at the destination.

If you think back to the last time you tried to influence someone and were unsuccessful, the likelihood is that you opted for the wrong style or perhaps it was the right style executed poorly. To be effective we need to be able to use both styles skilfully. Push and Pull styles of influencing have nothing to do with tone. You can Push in a thoughtful, low-key way and you can Pull in an intense, impatient manner.

What's your default style? Perhaps it's an ineffective Push, in which case, work on being clear about your proposal, giving your reasons and explaining what's in it for the other party. If your Push style is finessed, build your opposing behavioural muscle by exercising your Pull style. As a Puller, lead with questions, exercise your curiosity, believe that other people can have ideas that could be better than yours and work with those ideas, gaining engagement as you go.

Ally Yates is the author of Utter Confidence: How what you say and do influences your effectiveness in business

This article appeared in our August 2017 issue of The Actuary.
Click here to view this issue
Filed in
08
Topics
Careers
Professional
Soft skills