Are there really differences in life expectancy between Scotland and the rest of the UK? If so, how should actuaries take account of these? Phil Caine and Susan Hanlon discuss 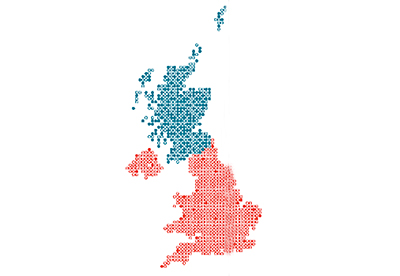 Do people in Scotland live shorter lives than the rest of the UK? If they do, on average, isn't this easily explained by different balances of socio-economic groups and areas of particularly high deprivation? After all, it's not as if we expect Scottish actuaries, lawyers or doctors to have lower life expectancy than their counterparts elsewhere. Is Scotland really that different from the north of England and what about the other parts of the UK?

National statistics (figure 1) show a consistent, clear gap between the period life expectancies at 65 in Scotland and England for both men and women at a population level. Research from National Records for Scotland shows that men in England, Wales and Northern Ireland can expect to live longer than those in Scotland by 2.3, 1.3 and 1.2 years respectively. 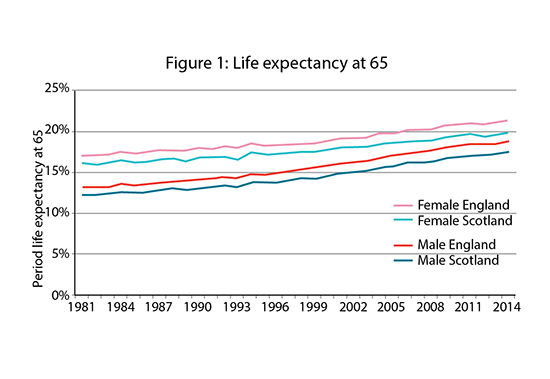 But national statistics can only take you so far. So, we investigated how far the Mercer Mortality Model, which uses a pooled dataset from over 1 million public and private sector DB pension beneficiaries, can explain the differences seen in Scotland.

After validation and removal of duplicates, the dataset includes more than four million life-years of experience - 95% of the records have a valid UK postcode and there is good geographical coverage across the whole of the UK. Using academically-reviewed methods, a Makeham-Perks force of mortality model was fitted to actual death data using Longevitas survival-modelling software.

The model differentiates mortality rates by age and gender, and splits out retirees before age 50 to capture ill-health effects. Using the Akaike Information Criterion, we then established six pension size bands and seven lifestyle groupings (from postcode 'types' provided by a commercial profiler). Every individual postcode is separately categorised using the full six to eight-character code, allowing more granularity and avoiding traditional problems with using broader areas that might contain a varied mix of housing types.

The spread of outcomes is very powerful - one male pensioner can be shown to be over four times more likely to die at age 65 than another, and another to have over seven years' higher life expectancy at 65, based on lifestyle and pension size alone. On average, we see lower pension sizes and less affluent lifestyle groups in Scotland, but that doesn't quite tell the full story.

We then tested adding 'geographical' risk factors to our model. They showed a gap between Scottish experience and the expectations already in the model - small, but nonetheless material as far as pension scheme funding goes. Thanks to the size of our dataset, we can consider these differences to be statistically significant. We also saw a similar but smaller effect heading south through England, with those in the South of England living slightly longer than the model suggested - enough to reasonably allow for another dividing line. Using optimisation techniques, we found that the line of latitude which gave the best fit for the 'North-South divide' starts on the west coast in the Mersey estuary, runs south of Liverpool and Manchester, straight through Sheffield and ends on the east coast in Lincolnshire, south of the Humber.

The resulting difference in like-for-like life expectancy between Scotland and the south of England is about nine months, with the other regions of the UK lying in between. Testing all seven lifestyle groups consistently showed lower life expectancies for the Scottish individuals in those groups (figure 2). This supports the hypothesis that there is a geographical component to life expectancy that can't be completely explained by income and housing/lifestyle factors.

Given this difference, is there further evidence to support it? We reviewed recent medical research which revealed evidence for a number of theories which could provide some explanation.

DIET - Research published in the British Medical Journal has shown that, although the English diet is far from perfect, the Scottish diet tends to be worse, and that if the Scots were to adopt the 'English diet' - eating more fruit and vegetables, and consuming less salt and saturated fat - the mortality gap between Scotland and England in terms of coronary heart disease, stroke and cancer could be reduced by around 40%.

ALCOHOL and SMOKING - Studies have shown that, across most socio-economic groups, and both sexes, there is more high-risk drinking, alcohol-related deaths, and smoking in Scotland and northern England compared to the rest of the UK.

DE-INDUSTRIALISATION - An interesting study of post-industrial areas across northern Europe showed former coal mining and industrial areas had higher rates of mortality, even after adjusting for migration and individual characteristics. This chimes with our north-south divide, with the line separating areas of previously heavy industry to the north and more affluent areas to the south. Although this effect was seen in all of the areas studied, it was worst in Scotland.

WEATHER - 'Too much rain, not enough sunshine' is a popular theory for the Scotland effect, but excess mortality appears to be far more associated with white people in Scotland than ethnic minority groups who have higher levels of vitamin D deficiency. 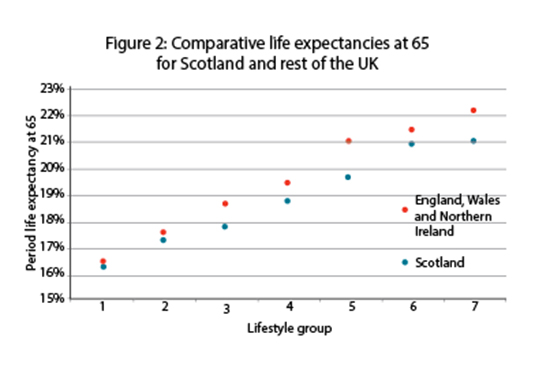 In reality, the Scotland effect seems likely to be due to a complex combination of factors like these.

The other bad news from the de-industrialisation study was that these types of regional inequalities in mortality tended to persist over time (see figure 1). Even as life expectancies in both Scotland and the rest of the UK have increased, the gaps between the two have persisted and even widened over the years.

If the Scots' diet and smoking rates do improve, they're likely to still remain behind England for some time as England improves too. Early life can cast long shadows and many of the issues relating to de-industrialisation, for example, could continue to have a large impact on the life expectancies in the affected populations for a long time to come. So what do we, as actuaries, do with this data?

Don't get overly distracted by national or regional differences. Inequalities in life expectancy will generally increase for smaller areas as we divide the population into smaller, increasingly homogenous groups. Regional state pension ages, for example, wouldn't address the inequalities that are often seen from one street to the next.

Do ensure you consider all material rating factors available to you. The geographical layer was added to our model as a further refinement after we had already explained much of the difference in life expectancies by more commonly-used factors such as income, socio-economic/housing-based lifestyle groups, and retirement age. Those commonly used-factors remain the most powerful predictors, and should be considered in any model.

Don't completely ignore the additional differences though. Consider what the additional impact could be. In the current low interest rate environment, allowance for a Scottish-based membership could impact the liabilities of a DB pension by 3% or more.

Susan Hanlon is an actuary in Mercer's Policy, Professionalism and Research team