Jon Palin, on behalf of the CMI Mortality Projections Committee, reviews the growing evidence for a slowing down of mortality improvements in the UK, noting the trend for pension scheme members is less clear 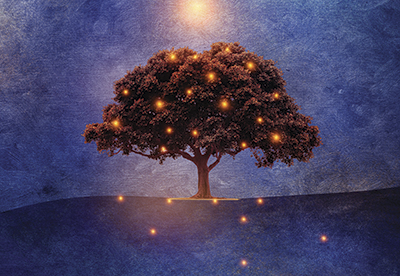 The fall in general population mortality improvements in the UK since 2011 has been greater than that predicted by most projection models. The question of how this should be reflected in future projections was discussed at a recent meeting in London following brief presentations by a panel of longevity specialists. This article summarises that meeting. The views expressed are not necessarily those of the Continuous Mortality Investigation (CMI) or the speakers' employers.

While the heavy mortality of early 2015 has been widely commented on, recent mortality has also been well above previous trends throughout the year, in summers as well as winters, and mortality in the first quarter of 2017 has also been high. Lower mortality improvements were also seen in recent years in Canada, Ireland and the USA, although not so far in France or Japan.

Chart 2 shows an apparent correspondence between increases in life expectancy and increases in National Health Service (NHS) expenditure under successive governments, with periods of higher increases in NHS spending corresponding to periods of faster growth in life expectancy. While correlation does not imply causation, it may be plausible that lower increases in NHS and social care spending have contributed in some way to lower mortality improvements. It was noted that, with the population growing and aging, a significant annual increase in NHS expenditure is required just to maintain current levels of care. 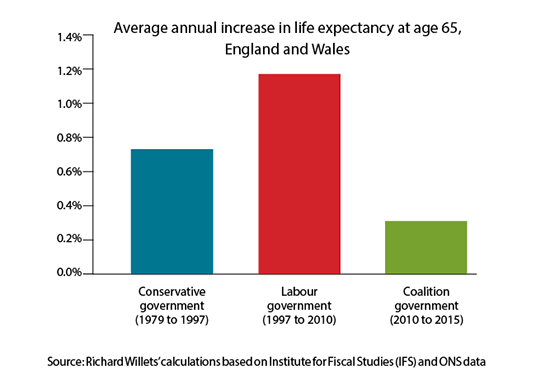 As neither the declining impact of circulatory disease nor the constraints on health and welfare spending are likely to be temporary, if these have been the principal drivers then low improvements may be expected to continue.

It was suggested there is research implying that an economic recession can be positive for longevity, on the basis that less demand for paid employment could lead to an increase in social care from unemployed relatives. There is, however, mixed evidence on the link between the economy and longevity, and earlier research may not be relevant to the recent recession as the contraction in public sector spending is unusual.

The audience was asked if they thought that recent low improvements were just a blip. Nobody expressed such a view. This represents quite a change from the 'wait and see' approach adopted by many a year or two ago, based on mortality data to that point.

The CMI model is calibrated to data for the general population for England and Wales, a large dataset with a long history. But the model is commonly applied to specific populations such as pension schemes, which typically have a concentration of liabilities amongst those of higher socio-economic status. They typically have lower mortality rates than the general population and may experience different mortality improvements. Understanding these differences, particularly for the more affluent members with large liabilities, could potentially lead to better liability estimates.

The first splits the national population into four socio-economic groups, based on the wealth of the area in which they live. Higher socio-economic status was linked to higher mortality improvements for the periods 2001-2005, 2005-2010 and 2010-2015 for both males and females. All four groups had lower improvements from 2010-15 than in earlier periods.

Charts 3 and 4 compare results for males from these analyses. They give quite a different picture of the highest socio-economic group in particular, although both show that group having the highest improvements in the most recent period. The figures shown have considerable uncertainty, with 95% confidence intervals of between 0.5% and 1.1% (although the confidence interval calculation methodologies differ). It is questionable whether considering socio-economic segments separately leads to better projections of mortality, given that improvement measurements are less certain for smaller segments and the different analyses give different messages in different periods. For example, if the Club Vita data to 2010 had been used to calibrate the CMI model, this could have led to projecting higher improvementsfor less affluent subgroups from 2010-2015, the opposite of whathas been seen in practice.

How much to smooth the CMI model

The 'period smoothing parameter', Sk, that has been added to the CMI_2016 version of the CMI model enables users to control how it responds to new data, with a lower value placing more weight on recent experience by applying less smoothing. While the CMI provides a default value, users are encouraged to consider what they deem appropriate.

Considering changes in reserves between successive versions of the CMI model, and what would have happened had the new version been available at the time, shows that (ignoring cases where the method changed) the core value of the period smoothing parameter usually gives broadly similar or lower changes in reserves to previous versions of the model.

Some users of the model may wish to use the period smoothing parameter as a proxy for the differences in recent experience between specific populations and the general population, mentioned above.

While most insurers had not adopted CMI_2015 for the 2016 year-end, indicating some caution, at least one speaker expected widespread adoption of CMI_2016 for the 2017 year-end. Reasons for this include: increasing evidence that recent mortality represents a genuine change in trend; publication of the model early in the year allows it to be considered well before the year-end; the flexibility offered by the Sk parameter allows adoption of the latest model, while still allowing users to take a view on recent mortality; and while there was uncertainty over future models during the CMI's consultation, we now have a good idea of what future versions will be.

The high turnout at the event, with some having to stand, shows that this is a topic of great interest. There seems to be a growing consensus that we have seen a genuine slow-down in general population mortality improvements rather than just a blip. The evidence is less clear on the level of historical mortality improvements in pension schemes and other segments of the population, and to what extent a different assumption should be made for them. Views on Sk suggest that the CMI's choice of 7.5 is a reasonable middle-of-the-road assumption, but many users are likely to form their own views and use a higher or lower value.

The meeting was hosted by the Staple Inn Actuarial Society and chaired by Tim Gordon, chair of the CMI Mortality Projections Committee ([email protected]). The speakers were Steven Baxter, head of Longevity Innovation and Research at Hymans Robertson; Stephen Courquin, head of UK Actuarial Research at RGA Re; Stuart McDonald, head of Longevity at Lloyds Banking Group; and Richard Willets, expert longevity consultant at Just. Presentation slides and an audio recording are available from: sias.org.uk/events/previous-events/?ev=301

Jon Palin on behalf of the CMI Mortality Projections Committee