Is de-risking in members' best interests? 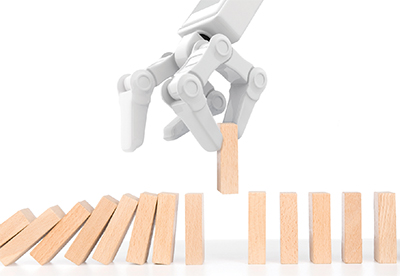 While a defined benefit pension scheme has insufficient assets to secure its liabilities with an insurance company (a buy-out or solvency measure), the scheme is exposed to the risk of sponsor default, or covenant risk.

In spite of this risk being key to members, most industry asset-liability models simulate funding levels by modelling the assets and liabilities only and ignore covenant risk. We have developed a stochastic model with Legal & General Investment Management to analyse members' outcomes in different scenarios incorporating the impact of sponsor default. We modelled schemes until 'death', where death was defined as the earlier of when the last benefit payment is made or the sponsor defaults.

On default of the sponsor we assumed that the scheme would be forced to wind up and buy out benefits with an insurance company.

No account was taken of the potential security provided by external sources, such as the Pension Protection Fund, or a regulated apportionment arrangement.

For each simulation, we calculated the Proportion of Benefits Met (PBM). This is the sum of the pensions paid divided by the sum of the pensions promised. As a simplified example, suppose the trustees have promised payments of £100 per year for the next 20 years, the scheme pays benefits in full for the first 10 years but then the sponsor defaults, the scheme winds up and the remaining assets are sufficient to purchase only 50% of the remaining benefits. In this instance the PBM value would be (10 x 100 + 10 x 50)/(20 x 100) = 75%.

Ensuring that all member benefits are paid is clearly the ultimate success. The chance of success, calculated as the proportion of simulations where PBM equals 100%, is one possible metric. However, there are a number of near successes that might be acceptable. The extent of any shortfall in the event of failure is also important. Table 1 shows various metrics based on the distribution of PBM. 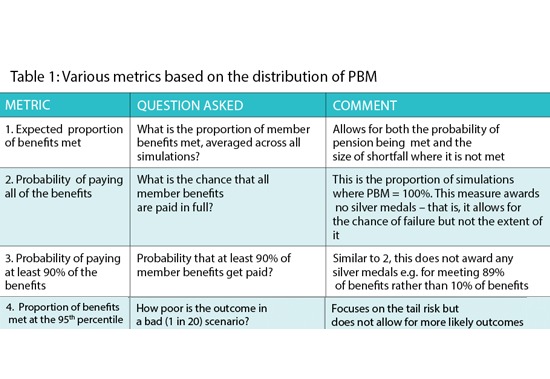 We observed that ignoring covenant risk overstates success on every metric. For example, the probability of paying all benefits is around 5% lower once covenant risk is included for our example scheme (key characteristics below). For schemes where the sponsor has a worse credit rating, the impact of covenant risk can be substantially larger. 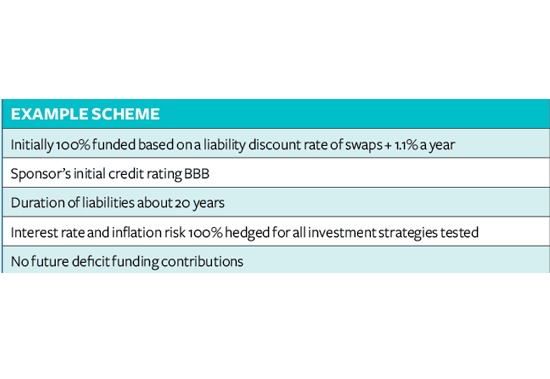 How much risk is required?

We calculated the four metrics for many different possible investment strategies. Chart 1 shows the asset allocations that maximise these metrics if covenant risk is ignored.

However, when covenant risk is incorporated - reflecting the reality that trustees are less than 100% confident of the sponsor remaining solvent - the optimised portfolios change as shown in Chart 2.

A key observation is that all of the optimised allocations, other than for metric 4 (which focuses on risk in the tail), have higher equity allocations when covenant risk is allowed for than when it is not. The reason for this is that the possibility of earlier windup (the assumed event upon sponsor default) has been factored into the optimisation.

There are many factors taken into account in the optimisation, including sequence of return risk (the risk of poor returns in the early years), the length of time the scheme is exposed to sponsor risk, and the correlation between sponsor default and poor market returns. However we believe that the key reason the model encourages holding more in return-seeking assets on allowing for covenant risk is to help close the larger funding gap of buyout sooner. Buying out benefits is the most expensive way of securing benefits.

We also re-ran the analysis on an ongoing basis, when in the event of sponsor default, the scheme would be able to run as a so-called 'zombie' scheme, without a covenant and with a low-risk investment strategy. Again, the analysis suggests strategies with more investment risk are likely to result in better member outcomes. 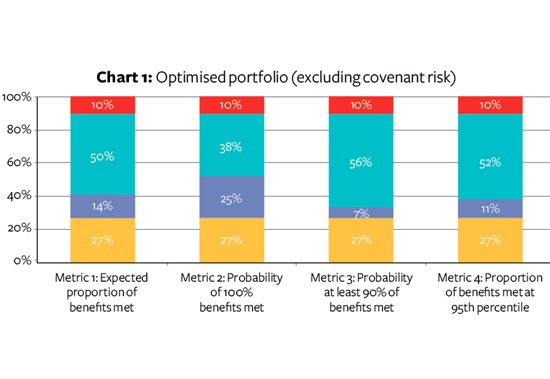 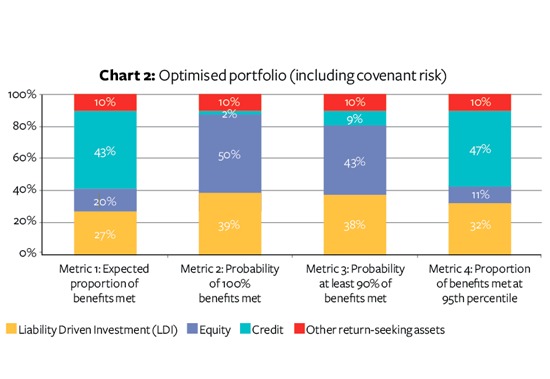 We believe this framework has broad applicability, in particular in helping trustees fulfil their duties in terms of Integrated Risk Management (which requires the consideration of funding, investment and covenant risks and how they interact). However, we note that in some extreme circumstances the metrics considered are likely to be inappropriate for investment strategy selection. If a scheme were significantly underfunded with a particularly weak covenant (a very high likelihood of insolvency over the next year) these measures would be inappropriate; they would not capture the risk aversion appropriate over a short time-horizon and it may be appropriate to have a much lower investment risk.

The results indicate that, allowing for covenant risk, running more investment risk generally leads to better outcomes for members compared to an investment strategy optimised in the absence of covenant risk.