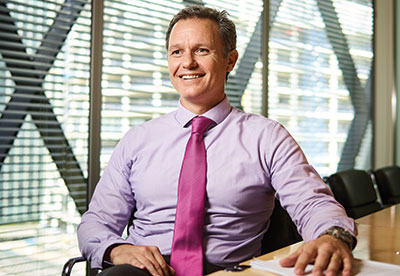 As global chief medical officer for Swiss Re, Dr John Schoonbee describes his role as "a compromise between actuarial science and medicine". Torn between the two disciplines, he initially chose medicine but admits he had a "hankering for numbers". While practicing clinically as a disability management consultant he started doing ad-hoc consultancy work for a reinsurer, eventually moving permanently into the reinsurance industry.

Explaining that the role of chief medical officer can be a varied one encompassing product development, underwriting and claims, he says: "I think an involved doctor at an insurer or reinsurer sees a broader view of life insurance than any single, individual function."

Research and development is also an important aspect of the role. "We focus on the latest disease trends as well as developments in diagnostics and treatments that affect global health. It's about changing health and sometimes even challenging things where we see room for improvement."

Dietary guidelines are one such area of focus, especially in the fight against obesity and diabetes. For many years the message has been to reduce fat, sugar and salt, eat five portions of fruit and vegetables and drink eight glasses of water a day. Schoonbee finds this advice frustrating. "There is extremely poor evidence on what we tell people to eat and not to eat. There is little evidence on limiting salt intake unless you are hypertensive. Also, there is a big difference between five portions of fruit, which are full of sugar, and certainly questionable for a diabetic, and five portions of green vegetables. In terms of water, the body will tell you to drink well before you are dehydrated. If you are fit and healthy, then for all intents and purposes you can eat what you like while sensibly limiting sugar and processed food. But with people who have a disease where the outcome can significantly be changed by what they eat, then we need advice that's based on stronger evidence."

Type 2 diabetes is one such condition where diet plays a vital role.  Affecting millions of people around the world, the consequences can be severe. "10-15 % of the western world are type 2 diabetic, up to half are pre-diabetic and two-thirds are overweight or obese. It is not just a problem in the US and the UK, China now has the most diabetics in the world and in Australia hospitals are being built specifically for diabetic amputations."

Schoonbee believes that current dietary advice for diabetics is wrong. "It is very hard for doctors and scientists to say we have been wrong but that's essentially what we've done by following traditional dietary guidelines."

Making it clear that the discussion is more focused on type 2, rather than type 1 diabetes, he continues: "We tell diabetics to eat mostly carbohydrate and limit their fat intake but there is extremely poor evidence for limiting fat. We have to challenge our internal belief that fat is bad, particularly the bad rap that saturated fats get. We get energy primarily from fats and carbohydrates and one of the problems of eating lots of the reduced fat, fat-free or lean stuff is that you don't get enough energy, so you compensate with carbs. But carbohydrates and the insulin cycle is what drives diabetes, due to excessive sugar and refined carbohydrate intake creating increased insulin resistance and progressive insulin insensitivity.

Insulin is an inflammatory molecule that increases the risk of many chronic conditions, including heart disease and cancer. If we could push insulin down it could be really big and exciting."

Schoonbee is one of a growing number of medical experts around the world that advocate a diet low in carbohydrate and high in fat. "There are a number of clinicians who are literally changing the face of diabetes. Using different strategies including calorie restriction, intermittent fasting or carbohydrate restriction, there is now clear evidence that the reversal of type 2 diabetes for a significant portion of patients is possible."

Schoonbee is convinced that reducing carbohydrates is the key to the problem. He uses the analogy of someone who is mildly allergic to peanuts: "We can give them medication to suppress the allergic response and they can keep eating peanuts, or they can stop eating peanuts. Clearly we recommend the latter. It is the 'stop eating peanuts' paradigm that we've missed in diabetes."

Keen to point out that it is a lifestyle choice rather than a short-term diet, he adds: "You have to maintain a low-carb lifestyle to sustain a diabetes reversal but you don't have to be hungry to do so if you embrace healthy fats." Although the diet is gaining traction and there is mounting evidence, both anecdotally and from smaller studies, as to its benefits, it has yet to be embraced fully by the medical profession. Schoonbee explains this is due to: "a lack of research, evidence on its long-term effects and decades of being brainwashed about the supposed ills of dietary fat." Of the firm opinion that diabetics should at least be made aware of the diet, he says, "Life is about choice. If you are diabetic (or at risk of it), on medication and feeling awful, then you should at least know the true facts about what could not only make you feel better, but possibly reverse your disease. Ideally, there would be randomised control trials but that is very hard to do. The only entities that would benefit financially from such studies, assuming a positive outcome and long-term improvement in health and longevity of diabetic sufferers, are life insurers."

Stressing that insurers are not nutritional experts, he is clear on the financial benefits. "If we could halve the incidence of diabetes in the world, it would have a huge impact on in-force policies to the tune of many zeros, not to mention the health benefits to millions of people."

With current dietary guidelines deeply engrained, that is perhaps an ambitious target as even Schoonbee admits that it is difficult to change our habits. "I have read a lot and looked at evidence but when eating three or four fried eggs cooked in tons of coconut oil I still have to tell myself that this is fine!" Yet with work being done to raise awareness it is not outside the realms of possibility. Talking about how he engages with journalists and doctors around the world, he says, "We have a unique opportunity to change world health. I am trying to engage with policymakers, with the NHS, with researchers and with medical journals to slowly change the tide."

Besides diabetes and obesity, the other big ticket global health issue Schoonbee has front of mind is smoking. On the matter of e-cigarettes, he says, "It is very interesting seeing the public health response because it is very different in the UK compared to the US. There are no studies on the long-term effects of vaping or smoking alternatives, but e-cigarettes are believed to be healthier because they do not produce tar and carbon monoxide. According to the NHS, the vapour has been found to contain some toxicants also found in cigarette smoke, but at much lower levels. Although there is a question of what exactly the liquid contains, as it's a pretty unregulated industry, Public Health England states they are better for you than traditional cigarettes."

While he is clear quitting smoking altogether would be the healthiest option, he knows that success rates for quitting are low. "Quitting is best but less than 10% manage to quit despite over 80% trying. For those who tried and failed, something that is less toxic is surely better."

Observing that many smokers already appear to have made the switch, he is concerned that new regulations regarding e-cigarettes may discourage their use. "If you walk around London it's astonishing how many people are vaping. But new regulations are coming in that limit the size of the liquid containers, so users will have to refill more. There is a danger that people will say 'stuff it' and buy traditional cigarettes."

We ask Schoonbee what other big issues he thinks could disrupt the insurance industry. For him, the issue of the insured knowing more than the insurer is a real concern. "Data asymmetry keeps me awake at night. The UK is in a special position because of good health records so non-disclosure of information is hard but there may be things that people know about that they don't disclose."

Recent advancements in diagnostic techniques have the potential to transform tumour analysis, enabling cancer to be detected without the need for invasive surgery. "Liquid biopsy is often talked about and one aspect is circulating DNA which we all have - cells break down, and DNA leaks out. If someone has cancer, the cancer cells also die and there are small fragments of that DNA in the bloodstream typically with the mutations the cells need to become malignant."

However, he is concerned about the implications for the insurance industry. "We don't know yet if we will be able to detect cancer earlier, but if someone finds out they have a higher risk of cancer, they may take out a big critical illness policy but the insurance industry may not have access to that information."

Some industry practitioners question whether advances in diagnostic techniques will mean that critical illness cover will become less viable. Schoonbee is more optimistic and thinks that the market could evolve and find alternative solutions to the problems such as offering products with reduced cover. "As diagnosis gets better, the proportion of people with mild diseases will get bigger and so maybe there shouldn't be such high sums assured. Paying a mortgage off when someone is diagnosed with cancer when it has no impact on their future mortality risk doesn't make sense to me."

However, he acknowledges that this could be a challenge. "Comparator websites make it hard to do something different. Consumers and intermediaries are used to the status quo and that is what they want. It is almost a philosophical question about whether we should be offering people what they want, or what they need."

Although Schoonbee's role encompasses financial aspects, his true motivation appears to be to improve health. As the conversation draws to a close and he reflects on our discussion, he concludes: "The holy grail is how to get people to manage their health in a better way in terms of exercise, not smoking, not drinking excessively and of course nutrition. It is hard to do but if we can make that shift it would be fantastic".

This article appeared in our August 2017 issue of The Actuary.
Click here to view this issue
Filed in
08
Also filed in
Interviews