A brief history of actuarial thinking 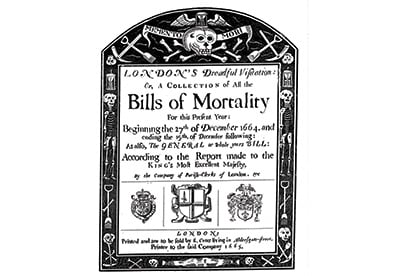 One of the hardest parts about writing an article on the history of British actuarial thought is choosing what, and what not, to write about. As there is no shortage of topics, I decided to cram in as many of them as I could by merely highlighting some of the milestones that I believe are particularly notable and of lasting impact.

This short list has been complied to highlight key intellectual developments across the various major fields of actuarial activity, including life assurance, pensions, general insurance, investment and risk. Taken together, they highlight the breadth of British actuarial thinking that has emerged over the past 300 years and which underpins contemporary actuarial theory and practice. Perhaps the creativity and perseverance that is evident in these breakthroughs can inspire the development of the next milestones in actuarial thinking.

Some key milestones in actuarial thought

Many reasonable claims can be made to the title of the first mortality table, perhaps starting with the annuity pricing table produced by the Roman juror, Ulpian, in the third century. More conventionally, the title is often accorded to the mortality tables of John Graunt or Johan De Witt that were published in the 1660s and 1670s.

However, it was Edmond Halley (the Astronomer Royal of comet fame) who deserves credit for the first mortality table to be produced using recognisable statistical methods objectively applied to mortality data. His Royal Society paper of 1693 on the mortality rates found in the sleepy Prussian town of Breslau (now Wroclaw, Poland) set the standard for mortality modelling and it remained the benchmark until Richard Price published his Northampton tables in 1772.

You may reasonably ask 'why Breslau'? Well, unlike virtually anywhere else in the world at the time, the Breslau authorities recorded the ages of citizens at their death (a fact that is thought to have been brought to Halley's attention by the legendary mathematician Gottfried Wilhelm Leibniz). Yes, mortality modelling was a lot harder in the seventeenth century.

Equitable Life established the enduring blueprint for with-profit business during the final quarter of the eighteenth century. James Dodson, Richard Price and his nephew, William Morgan, who was actuary at Equitable from 1775-1830, played crucial roles in the design and successful implementation of this blueprint.

The first rigorous valuation of the liabilities of a life office was undertaken by Morgan and his small team in the mid-1770s. The individual valuation of each of the 922 policies in force at the end of 1773 took several months of manual computation.

The first with-profit reversionary bonus was paid in 1781 after much internal deliberation and debate about what to do with the large surplus identified by the valuation.

These well documented historical discussions provide excellent examples of the role actuaries played in ensuring different generations of policyholders were treated fairly and equitably, and that the business was run on a sustainable long-term basis, in an age where there was no such thing as the Prudential Regulation Authority.

3. The first actuarial paper on investment strategy and asset-liability management

Over the first half of the nineteenth century, British actuaries made much scientific progress in mortality modelling in areas such as the graduation of mortality rates, the pooling of life office experience data and the analysis of the impact of selective underwriting. As they became increasingly confident that mortality modelling had been mastered, some attention turned to the asset side of the balance sheet.

Arthur Bailey, who would go on to become president of the Institute of Actuaries, published the first actuarial paper on asset-liability management and investment strategy in 1862. It is six pages long and sat on the Institute exam syllabus for more than 50 years. More importantly, it is replete with contemporary-sounding ideas about how life assurers' uniquely long-term and stable liabilities allow them to access asset illiquidity premiums by investing in mortgages and infrastructure loans. This illustrates how an awareness of historical work can provide direct inspiration for today's actuarial problem-solving, and can help avoid the re-inventing of wheels. A must read for all investment actuaries.

4. The first (past) president to advocate market-consistent valuation of defined benefit pension assets and liabilities

Few actuarial debates have had the same intensity or longevity as the question of how to value defined benefit pension fund assets and liabilities. For most of the twentieth century, standard British actuarial practice was to discount liability cashflows using a rate that reflected some long-term expectations for the long-term interest rate and/or the returns that would be earned by the fund's assets. Assets would then be consistently valued by discounting expected asset income at that or a closely-related discount rate, potentially resulting in asset valuations that significantly departed from their market values.

Actuarial discomfort with market values was at one of its episodic peaks in the years following the First World War, when an inflation shock led to significant increases in the long-term interest rate. Pension actuaries debated how to adjust their asset and liability values in light of these unexpected circumstances. In particular, should pension funds' gilts really be valued at these new and counter-intuitively low market values? While most pension actuaries thought not, in 1921 SG Warner (by then a past-president of the Institute of Actuaries) was notably market value-minded when he declared at a Staple Inn sessional meeting: "(Bond) depreciation should be severely dealt with, but there should be little hesitation about using (for liability valuation) something nearly approaching the rate of interest which that depreciation revealed as being secured."

Perhaps ironically given the actuarial traditionalist/financial economist debate of the 1990s, the crux of which was focused on the economists' argument that equity investment was not the panacea for defined benefit pension funding costs that some actuaries tended to claim, the most famous British economist of the twentieth century was instrumental in encouraging actuaries to embrace equity investing for long-term liability business. John Maynard Keynes, when he wasn't essentially inventing the subject of macro-economics at Cambridge, spent some of his time as the chairman of the National Mutual Life Assurance Society, a mid-sized British life office, from 1921-1938. He was also on the board of Provincial Insurance for much of this period. Under the influence of Keynes, National Mutual and Provincial were trail-blazers amongst life offices in making significant allocations to equities.

The managing director of Provincial noted in a 1942 letter to Keynes: "I am sometimes tempted to think that you would pervert my morals and encourage me in my secret vice to regard the investment of our funds, not as incidental to our main business - insurance - but as an equally important contributor to the profits of the Company". Keynes did better than that - he 'perverted the morals' of the whole actuarial profession!

Frank Redington's 1952 Journal of the Institute of Actuaries paper is probably the most famous British actuarial paper ever written. It is certainly the British actuarial paper most cited by those outside the actuarial profession. Ironically, the 'immunisation' idea that the paper is so renowned for was tacked on to the paper at the last minute - the paper's main purpose was a technical discussion of with-profit liability valuation methods. 'Immunisation' provided some much-needed mathematical clarity to the process of constructing bond portfolios to back fixed liabilities so that the surplus position was not sensitive to changes in the level of interest rates.

The Canadian economist (son of a Scots immigrant life actuary) Frederick Macaulay had defined bond duration decades earlier, but this work was largely undiscovered by economists and actuaries (including Redington) until later, and no one (including Macaulay) appreciated its risk management applications until after Redington's paper.

'Immunisation' is a great example of how a fundamental idea that seems very simple and obvious after it has been articulated with precision and clarity can also have an immediate and lasting impact on thinking and practice when it is presented well.

7. The first British actuarial paper to apply risk theory to the measurement of general insurance risk and capital requirements

By the time of the Second World War, British actuaries had accumulated almost two centuries of successful experience in estimating probabilities and applying them to insurance premium-setting and reserving.

However, these probabilities were used entirely in the estimation of expectations.

The largely diversifiable nature of mortality risk meant that actuaries felt fairly sanguine about material divergences from the mean, and used judgment rather than statistics to set margins for prudence in reserves. 'Risk theory', on the other hand, aimed to generate full probability distributions for insurance claims and, consequently, the future solvency levels of the insurer. It was mainly developed in Scandinavia. The British actuary, Robert Beard, presented a paper to the Institute of Actuaries' Students' Society in 1954 that showed how these techniques could be applied to general insurance business (US fire insurance in his example) to measure risk and capital requirements and evaluate risk management strategies such as reinsurance.

While its immediate direct impact on British actuarial practice was negligible, it can, in hindsight, be viewed as the firing of the starting gun in the development of a more quantitative, statistically sophisticated, approach to actuarial science that has characterised it ever since.

8. The first actuarial paper to apply risk theory to the measurement of financial market risk and capital requirements for long-term guarantee business

Prior to 1970, risk theory had been largely focused on general insurance risks (to the extent it was focused on anything at all within the scope of British actuarial thought at the time). Sidney Benjamin was the first British actuary to publish a paper that took a risk theory approach to financial market risk - specifically, to the risk created by providing long-term maturity guarantees on unit-linked equity funds. Benjamin's work suggested that life offices ought to be holding very significant capital to back these guarantees (and they were not).

He presented his paper at a Staple Inn sessional meeting in 1971. The paper caused such controversy that the President, RS Skerman, converted the meeting into a private discussion, thus avoiding the need to minute the discussion or publish the paper. It took another five years and a journey to the other side of the world for Benjamin to finally get his paper published - at the International Congress of Actuaries in Tokyo in 1976. This triggered a revolution in actuarial approaches to risk measurement and capital assessment, leading the way for David Wilkie and others to develop the stochastic asset models that can be regarded as the precursors to the Economic Scenario Generators that are in wide use in life, general insurance and pensions today.

This actuarial research stream also directly resulted in the end of the provision of unit-linked maturity guarantees in the UK in 1980 when a joint Institute and Faculty Working Party recommended holding capital levels similar to those proposed by Sidney Benjamin almost 10 years earlier. This is a good example of how influential the analytical work of the actuarial profession can (eventually!) be in ensuring risky and complex product features are appropriate and adequately reserved for.

Are there lessons that can be learned from these episodes for the current actuarial profession? It is perhaps tempting to find too much causation in historical episodes, but perhaps one of the lessons from the above is that actuaries must constantly adapt to a continually changing environment - unpredictable changes in technology, external intellectual breakthroughs, consumer tastes, and societal attitudes to experts, professions and financial institutions all help to determine the context in which actuaries work, and hence their opportunity to innovate and contribute relevant new ideas. From that perspective, openness to new ideas and lifelong learning coupled with professional integrity and a clear sense of professional purpose must be important traits for our profession's future success.

This article appeared in our July 2017 issue of The Actuary.
Click here to view this issue
Filed in
07
Topics
Careers
Professional
Soft skills