The Fix: How bankers lied, cheated and colluded to rig the world's most important number 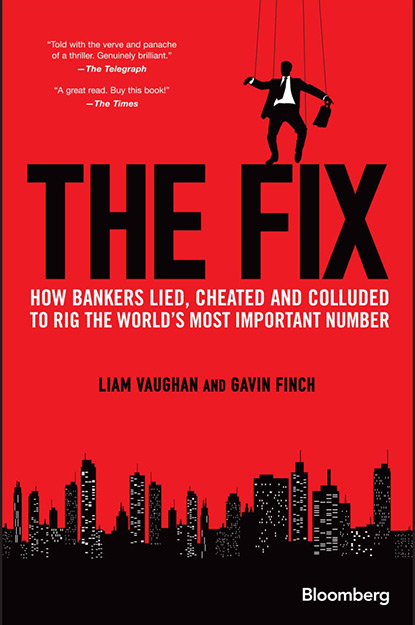 The Fix tells two stories. The first is the rise and fall of a gifted young derivatives trader called Tom Hayes, jailed for manipulating a vital interest rate. The second is the history of Libor, the interest rate Hayes sought to control. Libor is, at least in theory, the price banks charge each other to borrow money and is used as the benchmark for vast portfolios of mortgages and derivatives. In practice, the rate was embarrassingly open to abuse for years within a regulatory framework that was not fit for purpose. No one with even a passing interest in finance will be unaware where this ended: a series of high-profile scandals with reputations and careers destroyed.

First and foremost, The Fix is a fantastic read. I sat up until 3am to finish the book in one hit, unable to put it down. Authors Liam Vaughan and Gavin Finch are investigative journalists who happened upon the Libor story before the scandals broke, and they know how to tell a story. Their book is also meticulously researched and makes the complex world of derivatives trading accessible to the general reader while still providing enough technical meat to keep specialists interested.

Libor, we learn, was set by a committee, based on rate estimates submitted by each of the major banks. No bank wanted to be seen to be paying a different borrowing rate to its competitors, so submissions were arrived at after discussions with brokers who had a broader market view. Tom Hayes realised that if he could persuade the brokers to change the estimates they gave the bank, the published Libor rate would follow suit. To this end, he cultivated a network of brokers, paying them significant bonuses for "helping him out".

Hayes appears to never have thought of this as wrong-doing. The Fix prints a selection of his emails and instant messages from the time and there is not a hint of subterfuge. "I need you to keep it as low as possible, all right?" he wrote to one of his brokers at the height of the 2008 credit crunch, when his financial survival hung on a couple of Libor basis points. "I'll pay you, you know $50,000, $100,000... Whatever you want, all right?"

The damning evidence of these emails certainly explains why Hayes was so easily caught, when so many others accused of similar crimes have been acquitted. But Vaughan and Finch insist that Hayes was not alone in believing that fixing Libor for his own ends was a reasonable thing to do. As they put it, "a group of traders and brokers somewhere along the way convinced themselves that responsibility for their behaviour lay with the system rather than themselves". The view of the authors is clearly that morality should vest in the individual and that failures of regulation are no excuse.

Whether or not you share this view, I would strongly recommend The Fix. Combining meticulous research with great writing, Vaughan and Finch offer a thought-provoking take on one of the most high-profile financial scandals of recent years.