The making of a game changer

Marjorie Ngwenya, new president of the IFoA, reveals her vision for a future-fit profession, outlines the challenges of change, and the value diversity can bring. Richard Purcell reports 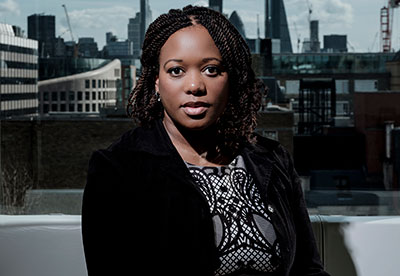 Having known Marjorie Ngwenya for a number of years, I was delighted to hear that she had been appointed the incoming president of the Institute and Faculty of Actuaries. As the first leader based outside the UK, her frequent travelling and busy schedule as president-elect meant this interview was a rare opportunity to catch up. While our discussion reinforced my perception of her as a very determined, yet personable character, it also revealed more about what makes Marjorie Ngwenya tick.

Born in Britain but raised in Zimbabwe, Ngwenya's parents were keen that she and her siblings would pursue a 'profession'. With her contemporaries choosing accountancy and medicine, Ngwenya, while admitting to being "not much of a conformist", stumbled upon her current career after entering a maths Olympiad in her final year at school; the prize being a bursary for an actuarial degree.

As she explains: "There were only about five actuaries in Zimbabwe at the time. The appeal was that it was challenging, rare and something to do with maths, which was a natural strength."

An actuarial career wasn't the only option, as she reveals an ongoing passion to become a pilot. "I passed BA's written pilot programme test," she tells me. Luckily for the profession, her career as a pilot didn't quite take off. However, having since had helicopter lessons, she re-affirms that "one day I have ambitions of flying a plane".

Securing a place at the London School of Economics, her actuarial career seemed on track when suddenly the Zimbabwean currency crashed, making her university fees unaffordable. She was forced to leave the course early, and instead found employment as a tax adviser at Deloitte. Ngwenya credits the experience with making her "self-sufficient and responsible from a young age". Fast forward a few years, and she finally moved into the actuarial field, gaining experience in reinsurance, life consulting and risk management.

More recently, Ngwenya, lured by the sun, decided on a move from the UK to South Africa. She describes her day job as non-technical. The role, as group executive for strategy at Liberty, an insurance and asset management company, leverages her "actuarial grounding and deep understanding of business levers". She confesses: "My interest has always been in the big picture, and I'm very ideas orientated."

Reflecting on the challenges during her career, Ngwenya explains that "time has always been in short supply". While she has now found a balance that seems to suit her, she clearly thrives on being "meaningfully occupied", as she puts it. It explains why she has juggled work with various volunteering roles over the years. I ask her what drives her to volunteer, and what have been some of the highlights. "The profession relies on the contribution of volunteers and I feel a sense of responsibility to the people before me, who gave up their time marking my exam papers." It is something that she has also found fulfilling: "Within the profession there is a ready-made community where I can make a difference and a natural place to use my energy." Her highlights have included being an editor of The Actuary, where she gained an insight into the workings of the IFoA, and which led her to join Council. She also cites her experience of teaching on actuarial courses. "That's where you can feel a more immediate positive contribution because you see the change in understanding. Also the gratification from students is very heart warming. Something I would like to keep doing."

Balancing work and volunteering is not easy. Ngwenya describes the balance between her day job and being on the presidential team as "very real". She credits her employer for supporting her. She also feels the responsibility that brings though, explaining: "Before I came here I was on conference calls for work. I constantly need to make sure I have my finger on the pulse and am not dropping balls. Ensuring my team can play their roles without my absence creating inertia."

We turn to Ngwenya's term as president, and her theme of 'Advancing the profession'. For her it's about "proactively seeking to be future-fit". She explains: "We know the world is changing, and the role we play will also naturally change. We need to plan for it, and we may need to collaborate," she says, referring to the rise of data science and the need to co-exist. She adds: "We need to be open to collaboration. Creating new bridges to ensure we are informed and well positioned."

Ngwenya also believes we should explore collaboration more deeply through working parties and research, and through the way we communicate our purpose or value. "We could partner with other associations to land the same message. The same goes for education. CAA Global, offering the Certified Actuarial Analyst qualification, is a great example of working with the Society of Actuaries, and I hope it can become an even broader alliance with other actuarial associations around the world."

I am curious to know what will happen to previous presidential themes. "I deliberately chose something that did not dislocate others, including 'Promote', 'Thought leadership' and 'Diversity' pursued by my predecessors," she says. "What I am seeking to achieve is very much building on what they have done and what the executive team is focused on. It would be foolish to expect that in a year I could achieve something divorced from what they did. The aim is for my theme to be additive."

The previous 'Diversity' theme is poignant as the appointment of Ngwenya heralds several firsts. She is the first president based outside the UK, the first non-Caucasian and the first under 40. While disappointed at being only the third female president of the profession, she is most concerned with the age label. "It's the one no one wants to say anything about." Reflecting on her own experiences, she explains: "I tried to be deliberately blind and refused to let such things be a factor." Her overriding mantra is simple: "I will get done what I say I will get done, and that speaks for itself."

With 45% of IFoA members based outside the UK, Ngwenya can also provide a valuable perspective on how the profession should be serving these members. As the member of the presidential team covering Africa and India, I ask her about the specific challenges in these regions. She is acutely aware that local actuarial groups are hungry for recognition and progress. "They want industry to see the value they can bring. However, regulation hasn't always advanced to a point where there is a natural role for actuaries. Often there is not a strong relationship between regulators and the actuarial community." It is here she believes the IFoA can play a role in helping to foster relationships.

She also acknowledges that there is more to be done in creating support structures for overseas students. "In countries like the UK, it is implied that your employer would support you with study leave, pay rises and promotions. But in Africa there aren't automatic study support structures." Ngwenya believes part of the solution lies in local actuarial communities playing an advocacy role and offering mentoring or tutoring.

Our conversation turns to diversity more generally, and I ask how she thinks the profession is doing. "I think we are improving and we're more aware about how we structure ourselves. If you go back 50 years, we relied on word of mouth and referrals for people to find out about the profession. Over time, the actuarial university degrees have become better known and that has helped open up the candidate pool."

Visualising the possibility of change is important, and was useful when Ngwenya was thinking about joining Council herself. "When you see that a body is made of a certain profile then you think it excludes a certain profile. But I was encouraged by former president, Ronnie Bowie, to explore it. He said that if people like me didn't put ourselves forward, the transformation would not happen. He was right". Ngwenya goes on to explain how Council has changed significantly in recent years, adding: "We now have quite a diverse Council, with a third comprising female and international representation at present." On her appointment as president, Ngwenya says she credits Council for "their courage in supporting me as a candidate who is unlike any of [her] predecessors".

Finally, I ask her who her role models are. Without revealing any names, she says: "I have a whole selection of role models. They know who they are, because they get a call whenever I have a big decision to make," adding: "They are people I have interacted with both professionally and personally and display characteristics I admire, such as the ability to see beyond the employee and to consider the person as a whole. Those able to put aside personal agendas and be supportive of the people they mentor. People who are not intimidated by their teams being excellent enough to outgrow them." As Ngwenya's presidency unfolds, there is no doubt that she will herself become a role model for a new generation to follow.

This article appeared in our July 2017 issue of The Actuary.
Click here to view this issue
Filed in
07
Also filed in
Interviews