Instability and stagnation in the EU

Steve Keen argues that, for the sake of Europes economic future, the EUs Stability and Growth Pact of 1997 should be overturned By its own yardstick, the European Union has failed as an economic entity. The centrepiece of its economic policies is the Stability and Growth Pact of 1997, which one would rightly expect to have resulted in stability and growth. 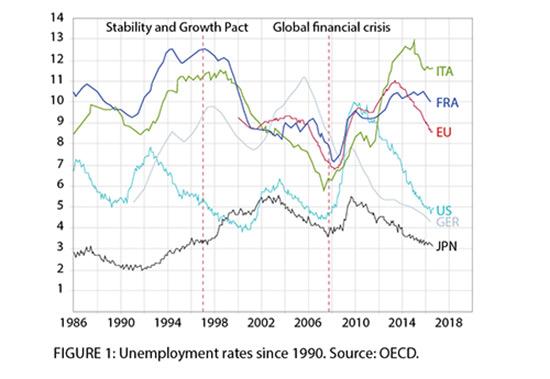 The EU's own explanations of the continuing crisis emphasise the failure of Eurozone countries to adhere to the Stability and Growth Pact's "medium-term objective of budgetary positions close to balance or in surplus", codified in the targets of a maximum government debt level of 60% of GDP, and a maximum government deficit of 3% of GDP.

Few Eurozone countries achieved these targets prior to the 2008 economic crisis. If the EU's rules were economically sound, then this country should be one of the Eurozone's success stories. In fact, it is Spain, illustrating that the crisis was caused not by excessive government debt, but by excessive private debt.

The Maastricht Treaty is very much in the mould of mainstream economics, which ignores private debt on the argument that transfers between private savers and borrowers are, to quote former Federal Reserve chairman Ben Bernanke, "pure redistributions" which "should have no significant macro-economic effects". However, this argument rests on a textbook model of money creation in which banks are intermediaries that arrange but do not initiate loans, and in which there is no link between the level of private debt and the money supply.

This model has recently been flatly contradicted by the Bank of England, the Deutsche Bundesbank and the central bank of Norway. They instead confirm what non-mainstream economists have been asserting for 40 years: that banks create debt and money simultaneously by an accounting operation, recording an increase in assets on one side of their ledgers and an increase in liabilities on the other. Equally, money is destroyed when bank debt is repaid: bank assets and liabilities fall by the same amount.

This gives the change in private debt great economic significance: when it is positive, it adds to demand from the circulation of existing money, and when it is negative, it subtracts from demand. It is easily shown that total demand in a closed economy is the sum of the turnover of existing money, plus credit (where credit is a flow, and is defined as the annual change in private debt). Ignoring credit - as the Stability and Growth Pact does - is a recipe for future economic disaster.

To illustrate this, consider a simple three-sector model of monetary transactions in a 'free market' economy with a banking sector but initially no government. There is a fixed amount of money that circulates between bank accounts, and its turnover is what generates GDP. In both tables below, the diagonals represent expenditure by each sector in pounds per year, while the off-diagonal cells represent where that expenditure is received as income, for example Sector 1 (S1) spends 'a' pounds per year in Sector 2. The rows therefore necessarily sum to zero.

Two situations are shown. In Table 1, only existing money is used to finance expenditure, and bank lending does not occur. For simplicity, the banking sector (BE) is left out completely. This table illustrates the basic macroeconomic point that aggregate expenditure is equal to aggregate income: what each sector spends is precisely the income for the other two sectors.

One other point should also be obvious: though any individual sector can save money by spending less than it receives, aggregate savings must be zero. Sector 1 could save money if its income (c+e pounds per year) was less than its expenditure (a+b pounds per year). But because aggregate expenditure is aggregate income, total savings are necessarily zero. So, though an individual can save - and therefore accumulate more of the money circulating in the economy - society as a whole cannot increase the aggregate amount of money by saving. Instead, what individual saving does is reduce aggregate income: money turns over more slowly, and less income is generated by the same amount of money. This shows that you can't ignore private debt when managing the economy. Figure 2 shows the consequences of this for Spain. Credit-based demand (largely for housing) caused an economic boom in Spain, leading to private debt rising dramatically while government debt fell - since tax revenue from the booming economy rose, while social security spending and the like fell as unemployment fell. The increasing reliance on credit drove private debt from 90% of GDP before the crisis to 220% of GDP afterwards, as credit grew from virtually zero in 1995 to almost 40% of GDP in 2007. 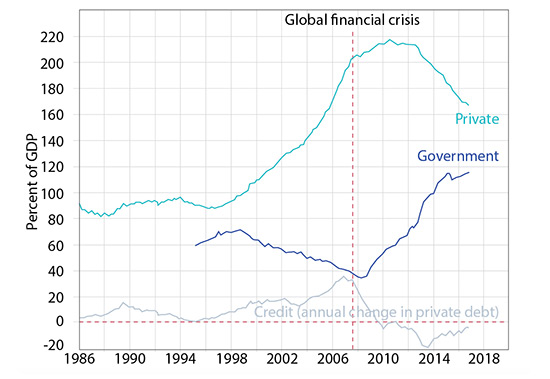 The economy boomed as credit grew, and then crashed when credit stopped growing, and Great Depression levels of unemployment ensued as credit turned massively negative -equivalent to almost minus 20% of GDP in 2013. This expansion and then collapse of private credit was the real cause of Spain's boom before the global financial crisis and collapse afterwards. 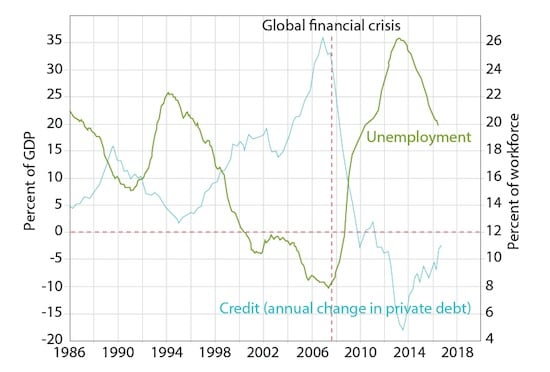 The Stability and Growth Pact 1997, by obsessing about the level of government debt and completely ignoring that of private debt, is the real cause of Europe's crisis in 2008, and its continuing malaise today.

For the sake of Europe's economic future, the pact has to be amended to focus on the real causes of macroeconomic problems. But given the inflexible manner in which the 'troika' (the EU - in particular, its committee of finance ministers; the ECB; and the IMF) have enforced the pact's rules despite the damage they have done, the pact is more likely to be overthrown by populist political movements than reformed.