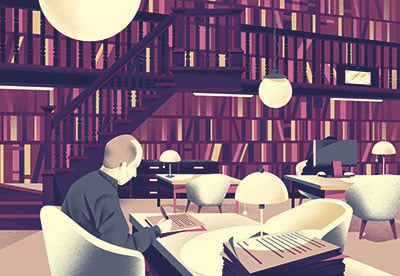 It's a grey afternoon and I'm sitting in the IFoA's library in Holborn Gate, waiting for an exam scrutiny meeting to start. Out of idle curiosity, I'm flicking through some old exam papers, when I come across these gems from the profession's entry papers from the 1950s:

"Write an essay on one of the following subjects:

I'm not sure how well these would fare as part of the scrutiny process we are going through for the 2017 exams. The first question would be rather tricky to produce a mark scheme for. And the second question is rather weighted against candidates who do not have English as a first language. Part of me wonders whether we haven't lost something from the exams - these questions look like an interesting test of communication skills at the very least - but mostly I'm grateful that I don't have to worry about how these questions were set and marked. It's interesting though that the examiners of the 1950s seem to have been concerned by candidates not identifying which question they are answering (number your answers carefully) - a recurring theme today!

Our exam system has undergone some very significant changes even in the (somewhat shorter) time that I have been involved - as student, marker, examiner and now chair of the Board of Examiners.

Perhaps the biggest change has been in the number of entries - the September 2016 exams featured 14,000 exams sat by just under 11,000 candidates. These were marked by a team of over 200 volunteers, mostly working in their spare time, ably supported by an administrative team working for the IFoA in Oxford. Without these volunteers, the system simply wouldn't work, and the profession is very grateful for their time and dedication.

The growth in numbers has been largely driven by the very rapid rise in overseas candidates, who now make up around two-thirds of the overall entry for the CT subjects. Not to mention the administrative difficulties of collecting scripts from all over the world (the team in Oxford are expert at the intricacies of clearing Indian customs and tracking down scripts lurking in dusty corners of Dutch warehouses), which has thrown up its own challenges. The overseas candidates have, for the most part and with some notable exceptions, a lower pass rate than candidates based in the UK. As a Board of Examiners, we have been working very hard to ensure that this is not because of the way we ask questions - that the language we use is clear, simple and idiom-free. Part of the scrutiny process now involves a review of the scripts by 'guinea pigs' based overseas to try to identify such issues. Hopefully, we are doing better, but there is still work to be done, particularly in relation to the support our overseas students get. We would also like more involvement from overseas markers and examiners - if you're reading this and would like to get involved, you know what to do.

The other major change in recent years has been the publication of students' marks for each exam, together with the pass mark for the paper. This has moved us away from the slightly absurd (and surely unique) position where we had one pass grade and no fewer than four separate fail grades.

Hopefully students will view this as a welcome increase in transparency.

We hope that this, together with the publication of mark schemes as part of the examiner's reports, will really help students understand what the examiners are looking for and so prepare for their next exams. As readers of the Student Consultative Forum notes will be aware, this change too has not been without its challenges. We need to improve the quality of our audit trails around marking processes, and we need to provide our markers - all of whom are volunteers and many of whom do not have a background in education - with better training.

But the most exciting changes are yet to come, with the new curriculum due to come into force in 2019. As a former examiner for CT6, I'm especially excited by the changes to the approach to assessment for the core technical subjects - in particular, the use of software. With luck, we will finally be able to test topics using the right tools - think about actually doing a CT6-style, run-off triangle in a spreadsheet!

Of course, we will also be able to test existing topics in new ways - for example, we'll be able to actually test students' ability to perform real simulations, as well as the underlying abstract theory. In my personal view, this is a huge step in the right direction.

Lastly, a request to current students. Hopefully, you will soon qualify. When you have, and you have finished breathing a huge sigh of relief, please do consider whether you might be interested in becoming one of our volunteers. It won't be to everyone's tastes, and can have its challenges and frustrations, but we welcome the fresh ideas and perspectives that new volunteers bring.

It seems to be traditional for the chair of the Board of Examiners to write a piece for The Actuary explaining what examiners are looking for from students. My own version would be as follows, particularly for the later subjects: