Discount climate change at your peril 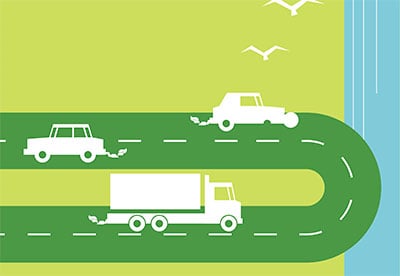 The year 2016 was the first that the world averaged 400 ppm of atmospheric carbon dioxide since about three million years ago. The greenhouse effect of carbon dioxide is well known and the consequences have included a rise in temperatures of about 1°C and a rise in sea level of about 20cm since the late 19th century. This has led to increased ocean acidity, decreased ice in the Arctic sea and in glaciers around the world, alongside wider effects on species, including humans.

The speed of the changes creates significant risks. Human civilisation, prosperity and interactions have been built in a world climate that has remained more or less as we have known it for the past 8,000 years. Many of the world's most prosperous and dynamic cities are located on coasts, many people live in water-stressed areas and many livelihoods depend on agricultural production based on current climatic conditions - humanity knows how to live and thrive in this world. Human and natural systems can and will adapt to some extent, but the changes in climate seen to date have already had measurable impacts on those alive today. Adaptation will also impose costs on current and future generations. Those costs are unlikely to be evenly distributed and may fall on the most vulnerable.

Impact on the UK

The UK Committee on Climate Change published, in July 2016, the most comprehensive assessment of the risks to the UK from climate change, starting today and heading out into the 2080s. It represents the collective analysis of more than 60 scientists, economists and other analysts, drawing on the latest evidence available. The Climate Change Risk Assessment (CCRA) identified about 60 distinct risks and six priority areas:

Invariably, the risks in each of these areas arise because of a combination of pressures: urbanisation, GDP growth, population growth and climate change together. For example, urbanisation can cause increased construction in the flood plain or cause porous ground to be paved over, both of which increase flood risk to properties.

At the same time, the risk is also increased by the effects of climate change: rising sea-levels, more intense rainfall. That combination of pressures explains each of the other priority areas as well.

There are two categories of actions being taken to tackle these risks: first, reducing greenhouse gas emissions to reduce the future effects of climate change; and, second, adapting to the risks that are emerging and will emerge (for example, rising sea levels, higher temperatures) regardless of action to curb future emissions, owing to historic emissions.

Much of the action in both categories is being taken, and financed, by people alive today. They are determining the world that future generations will inhabit through their choice of how much action to take now and how much to leave to the citizens of the future.

That raises a fundamental question: how should those alive today decide what to do now and what to leave to successive generations?

What is the appropriate balance between action now and action in the future?

Actuaries, economists, and many others, have long used discounting as a way to understand the trade-off between acting now and acting in the future.

One paper noted that, once the scientific evidence is accepted, the main difference between those advocating significant action now and those advocating leaving much more for future generations to tackle will be a different view of the discount rate applied to the future benefits of investment (Sunstein and Weisbach, 2008):

The maths is simple and dramatic. If £100bn is invested today to tackle climate change and produces a benefit in 100 years of £400bn, that is equivalent to a discount rate of 1.4%. That is the rate used in the famous Stern Review. On the other hand, if you think a 5-6% discount rate better reflects the trade-off, then investing £100bn today in the market would generate a benefit in 100 years of £21trn to be used to tackle climate change. Put a different way; we could fund the £400bn benefit by using just £2bn today, leaving another £98bn to be spent on other things - hospitals, schools, international aid, skills, defence or any number of other demands. This simple analysis would appear to indicate that if investments yielding much more than about 1.4% exist, current generations should spend less tackling climate change than suggested by Stern, and potentially a lot less if rates of 5% or so are achievable.

However, there are also wider conceptual issues with the 'discounting logic' presented above. Stern himself argues that discounting and the discount rate are not appropriate concepts when considering action to tackle climate change. Choices about tackling climate change are strategic decisions about very different paths for the future world. The discount rate exists to allow a comparison between slightly different projects. It is not the appropriate metric (either in theory or in practice) to use when comparing such different future worlds. In that view, "implementation will indeed require a strong reliance on markets, entrepreneurship and private investment [mediated by the discount rate] but the strategy has to be drawn on a bigger scale." The discount rate is only useful once it is clear what path is being pursued and it is a question of comparing financeable projects that fit within that path. The discount rate is not useful when deciding whether future generations will face global warming of 1.5 to 2°C, warming of 3-4°C, or warming of 5-6°C.

The discount rate produced by market signals is unlikely to provide clear guidance about what path the world should pursue. Where does this leave the debate about intergenerational fairness? It has to start with the best available scientific evidence. That is the foundation upon which we should decide which path to follow. There is uncertainty in that scientific evidence, but governments of all persuasions, businesses and individuals constantly make significant decisions faced with uncertainty and there is no reason for this to be the exception. The Paris Agreement signals a clear path to net zero carbon emissions by 2100 and to holding global temperatures well below 2°C. The UK Climate Change Act also signals a clear path for the UK to reduce emissions by at least 80% by 2050.

In those circumstances, the discussion about intergenerational fairness then falls back on two interlocking issues:

First, what is the equitable contribution among people alive today; what should wealthy countries do as compared to lower income countries? That debate is one of the most fundamental issues we need to answer and it is hard-wired into all the climate treaties (including the Paris Agreement) through the concept of "common but differentiated responsibility". They argue that most emissions have been caused by wealthier nations that have also benefited from those emissions to become wealthy and so they should act first, hardest and longest. There is a very wide debate and literature about the equitable contribution of nations now, given historical behaviours. The Committee on Climate Change provides a brief summary in its publication on the implications of the Paris Agreement for the UK.

Second, what are the benefits (to current and near-term generations) of action now? The simple view that acting against climate change only creates short-term costs is clearly wrong. Action now could, amongst other things, spur beneficial technological progress and learning, improve air quality and wider measures of health and wellbeing, and help to preserve forests and other natural environments for current (and future) benefit. It is not a question of only cost now for benefits to far-off generations. Put differently, it is important to avoid the "dividing up a pie" fallacy; we are not trying to divide up a fixed pie such that if future generations have more, current ones must have less; we are trying to increase the size of the pie to allow both current and future generations to benefit. This does not reduce or eliminate the costs required to achieve the benefits but does result in a more nuanced discussion about intergenerational fairness.

Read more in Issue 1 of the Intergenerational Fairness Bulletin published in February:
http://bit.ly/2osB20H

Matthew Bell is chief executive of the Committee on Climate Change

This article appeared in our June 2017 issue of The Actuary.
Click here to view this issue
Filed in
06
Topics
Environment