The Pryce of success 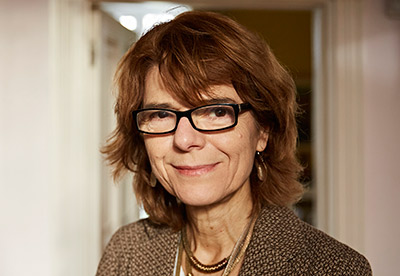 Vicky Pryce is an accomplished economist. Born in Greece, she moved to London at the age of 17, later embarking on a degree in economics at the London School of Economics. After completing a master's degree in monetary policy, she joined Williams & Glyn's Bank (now part of the Royal Bank of Scotland) in the first of many economist positions in both the public and private sector. She is currently on the board of the Centre for Economics and Business Research and holds several academic posts. An established media figure, she is often called upon for her expert opinion on economic matters.

With Brexit high on the political and economic agendas, it was only natural that our discussion started with Pryce's view that remaining in the single market is essential. "Anything that doesn't have that and doesn't have a customs union will be a poor option," she says. She explains that the supply chain is so interconnected that the idea of having a sectoral arrangement, whereby different sectors would have differing levels of access to the single market, simply wouldn't work.

"The reality is if you just look at the supply chain, companies that supply the manufacturing sector, for example, also supply other sectors and if you make allowances for one sector, what happens to the others? With sectoral arrangements, you end up in an even more sub-optimal position because of possible negative (unintended) consequences for the rest of the economy."

Access to the single market comes with free movement of people and capital. Pryce explains that migrants are one part of the economy that contributes positively to government finances and are good for the economy overall. With control of immigration one of the key issues in negotiating the terms of Brexit, we discuss the consequences of reducing numbers. "The Office for Budget Responsibility has calculated that without the migration that we have had, and without that continuing at around 250,000 net a year, we will be growing a lot less, have a higher deficit-to-GDP ratio and higher debt."

A decrease in economic growth would clearly also have consequences for employment levels and wages and therefore lead to a slower growth in household incomes and spending. Pryce believes that we are already seeing our incomes being stretched due to the fall in the pound since the Brexit referendum. "If you are trying to go abroad, it costs you more because of the exchange rate, and if you try and buy anything here it costs you more." She predicts this will only get worse, adding: "The price increases from the Brexit vote will continue because the effects haven't been passed through yet and we have a long way to go until that's the case."

On any positive outcomes of Brexit, such as whether it will allow opportunities for trade with countries outside the EU, Pryce is clear: "Of course we can do more trade with others, but nothing has stopped us so far. The National Institute of Economic and Social Research has calculated that even if you expect to trade very significantly with other countries, the reduction we will see from what we otherwise have, with the ease of trade and growth we have with the countries in the EU, will not be made up. We can have more domestic production, but it's a relatively small market here, and dealing with a bigger market increases the ability to enjoy economies of scale. There is no doubt that if you increase transaction costs for trade, then you are worse off. It is as simple as that. It might not be a financial catastrophe, and people might find ways round it, but you have this huge ability to sell right now to this enormous market."

Pryce explains that while the UK could mitigate the extra price increases that reverting to World Trade Organization rules might bring by cutting tariffs to zero, there would be adverse consequences. "We can cut our own tariffs to zero if that is what we want, but that could wipe out huge sections of our industry and create huge problems for the economy."

The letter of the law

She is also concerned about losing access to the international adjudication process provided by the European Court of Justice (ECJ). "The ECJ enable a level playing field and they are very happy to get involved if there is any serious dispute or discrimination. We won't have access to any of this, because we say we want to have control, but if you have control but don't subject yourself to an international adjudication process, then you are left in a very unfavourable position."

Our discussion turns to the dynamics between politics and economics. Pryce knows economic decisions are often made based on short-term 'vote-winning' tactics. "However well-packaged, such as a long-term industrial strategy, in reality politicians are just aiming to win votes and get to the next parliament. It's a terrible thing to say, that short-termism tends to dominate, but we are not the only country where it is like this."

She is also firmly of the opinion that short-term political decisions were, in part, to blame for the 2008 financial crisis. "It started politically, with the US deciding that they wanted all these people who were on very low incomes to join the home owning class - which of course is crazy because they encouraged lending to people without proper checks on whether they could afford the repayments."

We discuss other contributing factors to the crisis and the role that economists play in predicting such events. Earlier this year the Bank of England's chief economist, Andy Haldane, compared the failure of economists to correctly forecast events such as the 2008 financial crisis to the infamous hurricane forecast of 1987 by weatherman Michael Fish. In defence of her colleagues, Pryce says: "A lot of economists had already been talking about the huge increase in debt and how derivatives were not understood. The truth is that there are external shocks that take place and you don't really know how the consumer will behave, or how businesses will behave when you have these shocks, and of course you don't know what kind of shocks you are going to have."

Pryce is happier to point the finger in another direction. "I think the real problem was the fault of regulators that let this go to such an extent that policymakers let a big bank fail." She believes the decision to let Lehman Brothers fail was the wrong one: "My opinion is that they shouldn't have let Lehman Brothers go. There was a real belief at the time that the authorities had to show that no bank was too big to fail so as not to encourage bad behaviour by others too. But it backfired in the sense that it worsened, rather than contained, the financial meltdown and the recession that followed."

The crisis isn't over

Pryce is worried about the potential for another financial crisis, and feels that the banking crisis in the West has not been resolved. "Everyone is incredibly worried, because the cycle is such that there has to be a slowdown. Non-performing loans in some European countries are unsustainably high and there is a continued obsession with austerity, which leaves the Central Bank as the only game in town. Record low interest rates, not just here but elsewhere too, and a huge injection of liquidity are encouraging record levels of borrowing and that brings with it its own risks."

We discuss austerity measures in the UK and the challenge of increasing productivity in an environment of budget cuts. "In theory, you can have both, because you can get more for less. Austerity can force you to think again and look at what works based on evidence. But you need to do that in a sustained way, and not let populism or lobbying take over and make you forget to look at the evidence again."

Citing the prison service as an example, she says: "Evidence shows that putting people in prison doesn't reduce crime." She explains that the prison population is increasing, which is creating affordability problems. "The numbers in prison have doubled over the past 20 years but we can't afford to have all these people in jail."

Mentioning her book, Prisonomics, she explains that cutbacks in funding can force us to look at the evidence and ask if putting people in prison is the most efficient way to reduce crime levels.

Prisonomics is one of several books that Pryce has written on various topics focusing on what the evidence tells us. Greekonomics looks at the handling of her native homeland by European politicians and the International Monetary Fund since the financial crisis, and her latest, Why Women Need Quotas, highlights the obstacles faced by women in the workplace. "I'm very much in favour of quotas, not necessarily for boards, where I don't think it makes a lot of difference, but for senior executive positions, because that is the way you change the culture of an organisation." Of the firm belief that quotas provide competition, she adds: "If you have a quota for senior executives then you have to ensure that women who join don't leave, otherwise you end up with no competition for senior positions."

Pryce acknowledges that to achieve this, working culture must change, particularly in the private sector, which she believes is lagging behind the public sector in terms of the availability of part-time work, job sharing and promotions for women. From an economic perspective, she is clear: "I look at it entirely from a productivity point of view. There is evidence that says that women come back to work after maternity leave at levels below their skill level, especially if they work part-time. And women, whether mothers or not, tend to be put off by a long-hours, male-dominated culture and vote with their feet. Talent that companies have invested in is thus lost."

To address these issues, she believes that companies need to encourage change to happen and explains that the right changes would benefit men as well as women. "If the culture changes then companies become a lot more aware of their responsibilities and it increases diversity, so don't encourage lap dancing evenings with clients, and don't expect men and women to spend their weekends playing golf to get a new contract."

Pryce has had an extensive career in economics and has held senior roles at various organisations, including KPMG, the Department for Business Innovation and Skills, and FTI Consulting, a global business advisory firm. Her books showcase her expertise and illustrate that economics is as much about explaining human behaviour as it is about creating wealth. Economists are currently defending their reputation, but the political events, both in the UK and the rest of the world over the past year, highlight that shocks can happen, and although economic models can allow for many factors, the human and political elements are unpredictable.

Pryce sums this all up quite neatly: "The problem with economists is that they tend to assume that, on balance, people behave rationally and base their forecasts on that - and then politics intervenes and messes it all up!"

This article appeared in our June 2017 issue of The Actuary.
Click here to view this issue
Filed in:
06
Also filed in:
Interviews