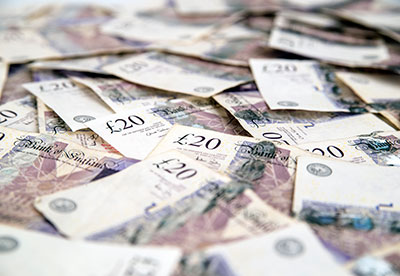 As a result of regulatory change, investors such as defined benefit pension schemes, using derivatives to hedge their exposures, need to source more liquidity to 'collateralise' those hedges, just as traditional sources of liquidity are stepping away from the market. Separately, other regulatory developments mean cash investors such as insurance companies and corporates are finding the usual venues for cash investments - banks and money market funds - less appealing.

These factors are coinciding to force pension funds and insurers to reconsider aspects of their investment strategies. But the coincidence of these pressures has led to the development of new approaches that have the potential to be of mutual benefit, providing both an alternative source of liquidity to users of derivatives, and an alternative vehicle for cash investors.

After the credit crisis of 2008, the G20 agreed on measures designed to increase market transparency and reduce counterparty and systemic risk. In Europe, this led to the introduction of the European Market Infrastructure Regulation (EMIR) in 2012.

EMIR introduced a range of measures, including the requirement that a wide range of derivatives be centrally cleared. The implications were significant for pension funds, and to a lesser extent insurance companies, who are significant holders of interest rate swaps.

One notable requirement under the central clearing regime is that variation margin, posted daily to cover the change in the value of a derivative contract, must be posted in cash format only. This is a major change - today, variation margin for over-the-counter derivative trades can typically be posted in government bonds or cash, which pension schemes and insurers would already be holding as part of their investment strategy to match their liabilities.

The requirement to post cash for variation margin therefore means that pension funds and insurers would be forced to hold a higher allocation to cash on their balance sheets, with potentially lower returns, or have to generate cash at short notice from other sources.

Pension funds are currently benefiting from a temporary exemption from the requirements of EMIR, expected to be extended until August 2018. However, as defined benefit pension schemes mature and pay out more than they receive from investments or contributions, and interest rates rise leading to collateral calls on interest rate swap positions, the ability for schemes to access cash without unduly constraining their investment strategy is becoming increasingly important.

At the same time that regulations are encouraging pension funds and insurers to seek sources of cash, regulators are putting pressure on traditional sources of liquidity.

Historically, in addition to holding contingency cash on their balance sheets, investors could use the repo market to access cash. In the repo market, one party receives cash from another, and in return pays interest and offers high quality collateral as security. If the first party defaults, the other party retains the collateral and can sell it immediately to recover any losses. In the repo market, banks traditionally sit in the middle between cash investors and cash borrowers, and take a spread between the interest they pay cash investors (the reverse repo rate) and the interest they receive from cash borrowers (the repo rate).

However, as a result of Basel III and banks having to hold more capital against their gross repo books, there has been a significant widening of bank repo spreads from 5 basis points (bps) to 10bps five years ago to as much as 40bps today at maturities of around 12 months.

In other words, the cost of sourcing cash via the repo markets has risen substantially - putting pressure on users of derivatives to find alternative sources of liquidity.

Along with users of derivatives, institutional cash investors are also facing significant changes. Banks' credit ratings have deteriorated in recent years, making them a less attractive host for cash investments. Banks have also become less willing to take on cash deposits with maturities of less than three months as they incur higher capital charges under Basel III. Instead, they prefer to offer investments of three-month maturities or longer. Where banks are accepting short-term cash deposits, they are likely to offer lower yields to cover the additional cost of capital.

These factors have led many investors to use money market funds rather than bank deposits. For insurers, under the new Solvency II regulatory framework, where there is a full look-through to the underlying exposures, these pooled funds provide a more efficient capital treatment, being subject to the credit risk module, rather than the counterparty module utilised for bank deposits.

However, under proposed European money market fund regulations currently scheduled to be issued in Q2 2017, only funds that invest more than 99.5% in government debt securities can maintain a constant net asset value (NAV). This could cause many prime (credit) money market funds to move to a variable or low volatility variable NAV, providing some additional issues for many cash investors.

As a result of these pressures, cash investors are seeking new investment solutions for their cash balances. Ideally, these solutions would offer both some security and daily liquidity, a constant NAV, and the potential for higher yields typically available from prime money market funds.

Pressures on cash investments have led to new avenues for many investors. For example, by working with asset managers to disintermediate banks, corporate treasurers have been given the opportunity to transact directly with non-bank counterparties in the repo market, often for the first time. Many of these non-bank counterparties offer gilts as security for the cash they borrow, giving treasurers the security they desire combined with a yield enhancement over what they would receive if they went directly to a bank. Unfortunately, this direct approach is typically only suitable for larger, better resourced investors. 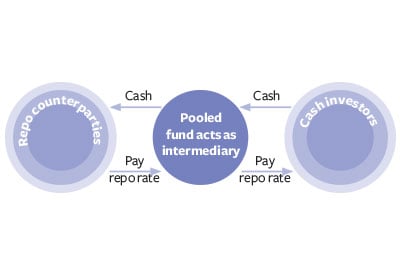 The coincidence of pressures on users of cash - both those who need cash to support the use of derivatives, or those who are seeking to invest it - has led to the development of an approach that could be of mutual benefit to different segments of the market. A pooled fund approach that invests cash predominantly in reverse repos, secured exclusively against UK government bonds supplied by non-bank repo counterparties, can both provide an attractive vehicle for cash investors and an alternative source of liquidity for users of derivatives.

For example, non-bank counterparties such as pension funds would be able to access cash on better terms than through the bank-intermediated repo market, using the government bonds they already hold as part of their liability hedging strategy as collateral. On the other side, cash investors would be able to access a more attractive yield than bank counterparties would typically provide, along with the greater security of underlying government bond collateral.

A new solution: providing derivatives users with access to cash, and cash investors with an alternative investment vehicle Changes in regulation since the financial crisis are having a significant impact on heavy users of derivatives, such as defined benefit pension schemes who use these instruments for risk management purposes. Similarly, new requirements for banks are affecting the ability of cash investors to achieve attractive yields with appropriate security. Some of these issues are a result of banks playing the role of intermediary in the repo market, so by replacing the banks with an alternative - such as a pooled fund - we believe the requirements of both sets of market participants can be met. Such an approach can help users of derivatives in need of cash for collateral purposes - for example pension funds and insurers - to access new sources of liquidity. It can also help other institutional cash investors with excess cash to invest - including corporates, pension funds and insurers - make the most of their liquidity investments.

Simon Richards is head of insurance solutions at Insight Investment

This article appeared in our June 2017 issue of The Actuary.
Click here to view this issue
Filed in
06
Topics
Investment