Walk the walk on climate change

Climate risk will alter both the geographical and financial landscapes, but leading insurers are divesting from fossil fuels, says Peter Bosshard 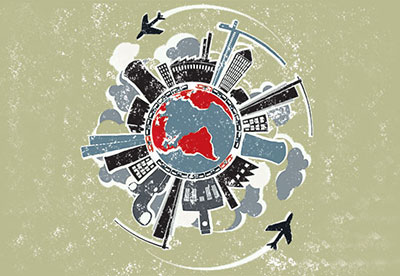 Insurance companies are responding to climate change in very different ways. Warren Buffett, the CEO of Berkshire Hathaway, commented last year that global warming should not be on the "list of worries" of his shareholders. Insurers have so far been able to adjust their premiums to the growing risks from catastrophic weather events, and according to Buffett, the increased risk "has made insurance companies far more valuable".

It would, however, be shortsighted for insurers to see global warming foremost as a business opportunity. Standard & Poor's has warned that climate change may "lead to a sudden increase in the risk and volatility of weather losses if certain tipping points are reached, for example, the melting of the Greenland ice sheet". Aviva put this threat most bluntly: "Left unchecked", climate change will "render significant portions of the economy uninsurable, shrinking our addressable market".

Leading European insurance companies have warned about the risks of global warming for more than two decades. "Climate change presents a major challenge for mankind, and insurers will play a central role in helping society to adapt and mitigate its effects", Insurance Europe stated in October 2015. Some insurers are offering premium incentives for low-carbon technologies, while others have developed products that make clients more resilient in coping with the impacts of a warming planet. Yet this is no longer sufficient.

In the Paris Agreement, the world's governments committed to limiting global average temperature increases to well below 2°C. Climate Analytics, a research institute, has documented that no new coal power plants can be built, and most operating plants must be retired early if the planet is to stay within this limit and climate chaos is to be avoided.

A new report by Profundo finds that the insurance industry has not yet aligned itself with the goals of the Paris Agreement. According to the research firm, 15 leading European insurance and reinsurance companies have invested at least $131 billion in coal and other fossil fuel companies. Ceres, a group promoting socially responsible investment, found in a separate report that the top 40 insurers in the US have invested no less than $459 billion in fossil fuel companies. According to Ceres, US insurers are even more strongly invested in fossil fuels than average bondholders.

In recent years, a rapidly growing list of investors has decided to divest from coal and other fossil fuel companies. So far, 709 investors managing more than $5 trillion in assets have committed to do so. The list includes seven insurance companies - Aegon, Allianz, Aviva, AXA, HCF, SCOR and Storebrand - which have agreed to divest from the coal sector.

Of course, the core business of insurers is not to manage assets, but to underwrite risk. The new report from Profundo found that 11 of Europe's 15 leading insurance and reinsurance companies continue to be "highly involved" in underwriting fossil fuel projects.

Last month, AXA was the first insurance company to stop underwriting coal. At its AGM, the world's largest insurer announced that it would no longer offer property and casualty insurance to the coal companies from which it had divested. AXA argued that "supporting an energy transition curve aligned with a + 2°C scenario" was consistent with its "broader corporate responsibility strategy to promote a stronger and safer society".

Leading European insurers are closely monitoring each other's policy developments. With AXA taking the first step, who will be next to unfriend coal? By making coal projects uninsurable, they could make a major contribution to the climate goals of the Paris Agreement.

Insurance companies have sharpened our awareness of climate risks, and consumers have come to expect their core business to be consistent with their climate rhetoric. A new coalition of civil society organisations, including Friends of the Earth France, Greenpeace Switzerland, the Sierra Club and the Sunrise Project, among others, is calling on insurers to divest from and stop underwriting coal companies, and scale up their investment in clean energy technologies instead.

Insurance companies have a self-interest in avoiding catastrophic climate change. Like all enterprises they also have a social responsibility to make their business compatible with the Paris Agreement. At this year's climate summit in Bonn in November, the new civil society coalition will inform interested audiences which insurers are leading and which are straggling in the fight against climate change.

The Profundo report and a briefing paper on coal insurance can be found at www.unfriendcoal.com

Peter Bosshard directs the finance programme of the Sunrise Project, an organisation to support a socially, economically and environmentally sustainable future

This article appeared in our May 2017 issue of The Actuary.
Click here to view this issue
Filed in
05
Topics
Risk & ERM