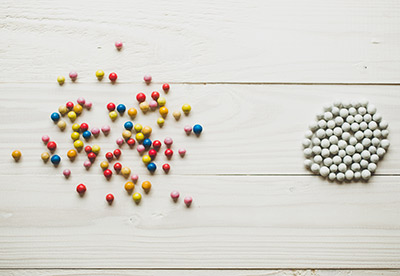 Regulatory restrictions on risk classification are a common feature of personal insurance markets. Gender classification is now banned in the European Union, and many countries limit the use of genetic tests. Although such restrictions seem popular with policymakers, they can also lead to adverse selection. Actuaries usually argue that this is a bad thing.

This article gives a partial counter-argument. We suggest that from a social perspective, a degree of adverse selection can be a good thing.

To provide context, it may help to think of life insurance, where we typically observe a majority of 'standard' lives and a small number of much higher risk lives, say with a genetic predisposition. Our argument can be then be illustrated by the following example. The numbers are simplified and exaggerated for clarity, but the underlying argument is quite general.

We shall assume that all losses and insurance cover are for unit amounts (this simplifies the discussion, but it is not necessary). The two scenarios are represented in the upper and lower parts of Figure 1. Here, each 'H' represents one high risk and each 'L' represents one low risk. The population has the typical predominance of lower risks; eight lower risks each with probability of loss 0.01, and two higher risks each with probability of loss 0.04. In each scenario, the lives in the orange-shaded areas denote those covered by insurance.

In Scenario 1, risk-differentiated premiums are charged. Higher and lower risk-groups each face a price equivalent to their probability of loss (an actuarially fair price). We assume that the demand response of each risk group to an actuarially fair price is the same: exactly half the members of each risk group buy insurance. The shading shows that a total of five risks are covered. Note that the equal areas of shading over the one 'H' and four 'L' represent equal expected losses.

The weighted average of the premiums paid in Scenario 1 is (4 x 0.01 +1 x 0.04)/5 = 0.016. Since higher and lower risks are insured in the same proportions as they exist in the population, there is no adverse selection. The expected losses compensated by insurance for the whole population, which we call the 'loss coverage', can be indexed by

In Scenario 2, risk classification has been banned, and so insurers have to charge a common 'pooled' premium to both higher and lower risks. Higher risks buy more insurance, and lower risks buy less. The shading shows that three risks (compared with five previously) are now covered. The pooled premium is set as the weighted average of the true risks, so that expected profits on low risks exactly offset expected losses on high risks. This weighted average premium is (1 x 0.01 +2 x 0.04)/3 = 0.03.

Note that the weighted average premium is higher in Scenario 2, and the number of risks insured is lower. These are the essential features of adverse selection, which Scenario 2 accurately and completely represents. But there is a surprise: despite the adverse selection in Scenario 2, the expected losses compensated by insurance for the whole population are now higher. Graphically, this is represented by the larger area of shading in Scenario 2. Arithmetically, the loss coverage under this scenario is:

We suggest that Scenario 2, with a higher expected fraction of the population's losses compensated by insurance, is superior from a social viewpoint to Scenario 1. The superiority of Scenario 2 arises, not despite adverse selection, but because of adverse selection.

The argument illustrated by the example applies broadly. It does not depend on the specific context of life insurance, nor on any unusual choice of numbers for the example. The key idea is that loss coverage - expected losses compensated by insurance for the whole population - is increased by a degree of adverse selection.

We suggest that for a public policymaker or regulator, loss coverage is a reasonable metric for the social efficacy of insurance. We say this because compensation of the population's losses is the main social purpose of insurance, which policymakers often seek to promote by public education, by exhortation and sometimes by incentives such as tax relief on premiums. Policymakers may therefore prefer risk classification regimes that lead to higher loss coverage. This typically means regimes that produce a non-zero level of adverse selection, and somewhat lower numbers insured than if adverse selection were eliminated. 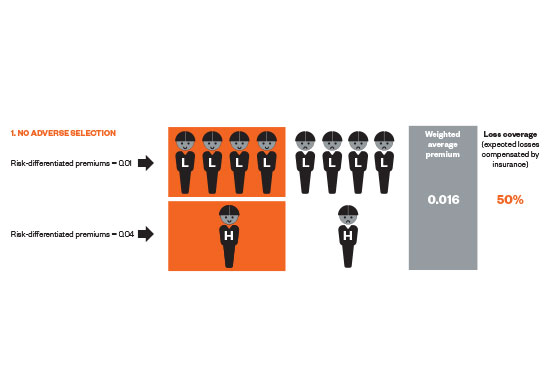 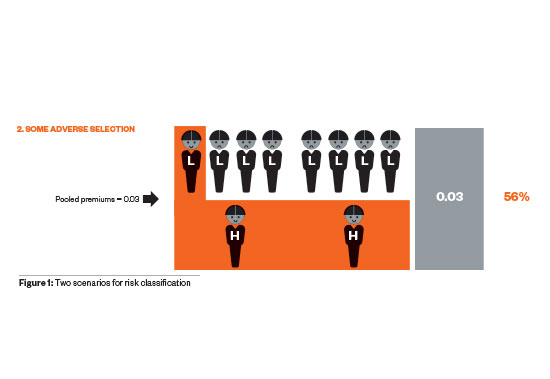 No need for a trade-off

Our argument contrasts with orthodox economic and actuarial arguments that public policymakers should either seek to minimise adverse selection, or make a trade-off against other policy preferences such as dislike of discrimination. The orthodox arguments highlight that adverse selection leads to a rise in the average price of insurance and fall in numbers insured. What these arguments overlook is that adverse selection also leads to a shift in coverage towards higher risks (those who need insurance most). If this shift in coverage is large enough, it can more than outweigh the fall in numbers insured, so that loss coverage is increased.

One way to maximise loss coverage is to make insurance compulsory. Policymakers sometimes adopt this solution (for example, third-party liability insurance for motorists and employers in the UK). In other markets, such as life insurance, loss coverage is socially important, but arguably not enough to justify the infringement of freedom which compulsory insurance implies. In these markets, policymakers may seek to raise loss coverage to the maximum level consistent with individual freedom of choice in insurance decisions. This can be achieved by limiting risk classification to the degree necessary to induce the 'right' level of adverse selection - the level which maximises loss coverage. Limiting risk classification however would affect the ongoing ability to understand the underlying risks.

Some readers may have noticed that if the adverse selection in Scenario 2 of the example progresses further to its logical extreme, so that only a single higher risk remains insured, loss coverage will then be lower than with no adverse selection. This point is considered further in Guy's recent book: Loss Coverage: Why Insurance Works Better with Some Adverse Selection. For now, we merely reiterate that our message is one of moderation: we say insurance works better with some adverse selection, not with any amount of adverse selection.

Guy Thomas and Pradip Tapadar wish to thank their research collaborators, Angus Macdonald and MingJie Hao. The views expressed in this article are the authors'.

Pradip Tapadar is senior lecturer at the University of Kent

Guy Thomas is honorary lecturer at the University of Kent

This article appeared in our May 2017 issue of The Actuary.
Click here to view this issue
Filed in
05
Topics
Risk & ERM