Matthew Edwards looks at the most interesting pieces of mortality news of 2016, both in the UK and internationally 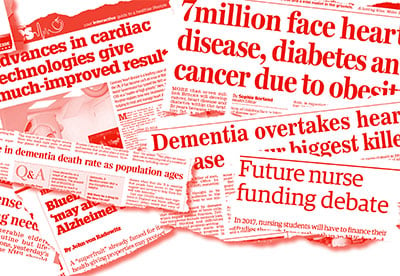 Recent mortality experience in England and Wales has been surprising, with very little improvement in mortality rates over 2012 and 2013, and a significant worsening over 2015.

In Working Paper (WP) 93, the IFoA's Continuous Mortality Investigation (CMI) presented a 'near year-end' estimate of 2016 experience. By combining provisional deaths data to 14 October 2016 with an estimate for the remainder of the year, in conjunction with exposure based on the Office for National Statistics (ONS) 2015 mid-year population estimates, the CMI concluded that 2016 total deaths in England and Wales were expected to be around 1% lower than in 2015, and the exposure around 1% higher, implying a 2% improvement in mortality rates.

Now that the provisional weekly death data for the whole of 2016 is available, we can attempt to update the CMI's estimate. Analysing weekly deaths data since 15 October, and comparing with the equivalent period in 2015, shows that 2016 deaths in that remaining period for ages 65 and above are up 6.5%.

Adjusting for the above exposure increase, the mortality rate for that period and age band has increased by around 5%. This crude comparison shows, if anything, the CMI's estimate based on a mid-October cut is likely to have underestimated deaths for 2016, and therefore overestimated the variation from 2015. All other things being equal, the recalibration of the 'CMI_2016' improvement model to full 2016 data is likely to lead to lower life expectancies than were estimated in WP93 - and these were already materially lower than the 'CMI_2015' model calculations on 2015 data.

Looking at younger ages (age band 15-64), and considering the year as a whole, a similar comparison shows male mortality rates to have increased by of the order of 1%, with an approximate 2% increase in the female mortality rate. Although the numbers themselves are too crudely calculated to be reliable, the direction of the apparent variation is remarkable.

Dementia and Alzheimer's now the leading killer in the UK

Recent data from the ONS provides some insights into the cause of recent unexpected mortality experience, with the above unforgettable headline. Their latest analysis covering deaths in England and Wales, released in November 2016, showed that deaths due to dementia and Alzheimer's disease have now replaced ischaemic heart disease as the leading cause of death in England and Wales, accounting for 11.6% of deaths in 2015 (see figure 1).

At a broad level, cancer remains the leading disease group by death numbers, followed by circulatory disease. However, this masks trends in the underlying causes of death.

At a more granular level, ischaemic heart disease has historically been the main cause of death in England and Wales. Over the last 15 years, the rates of death from heart disease have halved. More recently we have seen a dramatic increase in deaths due to dementia and Alzheimer's, due in part to a better understanding of the disease (affecting diagnosis and death reporting), but also owing to people living longer and therefore being more susceptible as they reach older ages.

Underlying much of these statistics is diabetes, which has increased alarmingly in recent years, and is directly linked to heart disease. There is increasing acceptance also of a link between diabetes (or rather, the underlying condition of 'metabolic syndrome') and Alzheimer's, to the extent that Alzheimer's is sometimes referred to as 'type III' diabetes. 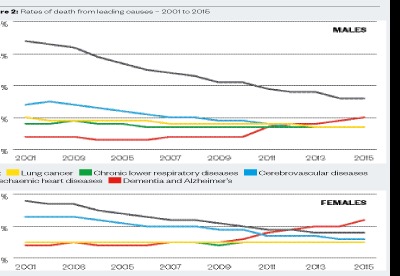 Another piece of interesting UK news emerging in 2016 was the recognition of severe financial difficulties in National Health Service funding. The 'health of the health service' is a major driver of longevity for the vast majority of the population, as all the main aspects of medical care - primary care, screening, pharmaceutical treatment, surgery - depend on suitable financing.

In September 2016, the Office for Budget Responsibility projected that health spending would decrease in per-capita real terms by 0.9% (cumulative) over the four years 2016-2020. This contrasts with the previous 36-year period which saw real per capita spending increase by a factor of approximately 3.3. Note that this estimate will understate the per-capita impact for over-65s, owing to demographic shifts.

Financial pressure in the health service is being exacerbated by a number of causes, in addition to what actuaries might reasonably expect (for instance, medical treatment costs materially outstripping RPI, or the ever-increasing strain from diabetes, which accounts for approximately one-tenth of health expenditure).

NHS trusts and foundation trusts in England ended the 2015-2016 financial year with nearly £2.5bn of deficits. According to much press coverage in late 2016, the NHS budget was set for a £22bn shortfall (cumulative to 2021) with further reductions necessary to cope with this position. The outlook for medical care for those without recourse to private health looks bleak.

The point has been brought to light in research published very recently in the Journal of the Royal Society of Medicine regarding the causes for high 2015 mortality, which concluded that 'the evidence points to a major failure of the health system, possibly exacerbated by failings in social care' rather than particular problems with, for instance, flu vaccine.

Emerging mortality trends in the US

It is interesting to compare recent UK experience with that of the US. A report released in late 2016 by the Centers for Disease Control and Prevention (CDC) announced that overall US mortality had increased in 2015 from 2014, the first such increase for around 20 years. The age-adjusted death rate increased by 1.2%, driven largely by increases in unintentional injuries (see poisonings below), Alzheimer's disease and deaths due to liver disease.

Deaths directly attributable to diabetes have also increased, although of the main causes of death, that showing the largest relative increase was Alzheimer's, with deaths up 16% from the previous year.

There has been particular interest in the mortality of middle-aged (ages 45-54) white non-Hispanic men and women. This group has seen increasing mortality since around the year 2000, although this has come to prominence only recently, owing to the overlay of differing ethnic effects, with mortality improvements from the other racial categories leading to overall improvements in that age band.

2016 has also seen growing realisation in the US of the existence of a material gap in mortality improvements between higher and lower ends of the socio-economic spectrum, including studies that show differing trends in life expectancy from 1980-2010 for different income quintiles. Our analysis of these studies indicates an approximately 2% difference in improvement between top and bottom quintiles for age 50.

Finally, let's look at global threats from disease, and in particular the disease epidemic that made the most headlines in 2016.

The Zika virus has actually been known since 1947, when it was first isolated in the Zika Forest of Uganda (hence its name). The virus is related to dengue, yellow fever, Japanese encephalitis, and West Nile viruses. It is transmitted by daytime-active mosquitoes, although the transmission mechanism has now been seen to include sexual transmission.

After consideration of a number of microcephaly cases (and other neurological disorders) linked to the Zika virus, primarily in French Polynesia and Brazil, the World Health Organisation (WHO) declared a public health emergency in February 2016. Although the virus is not associated with adult deaths, the prospect of natal deformity in pregnant women caused widespread concern, in particular within the US because of proximity to South America and for those involved in the Rio Olympics. Cases in Europe have been rare, with Spain being the only country with a material number of cases.

In positive news, the WHO removed the Public Health Emergency status in November, as it was no longer felt appropriate given the understanding gained since February's 'panic'. This is reassuring given that, at present, no vaccines or cures are available.

Thinking about the implications for actuaries, it is expected the mortality and longevity impact of the Zika virus will be negligible, but there may be some increase to critical illness claims through Guillain-Barré syndrome, associated with Zika.

This article appeared in our March 2017 issue of The Actuary.
Click here to view this issue
Filed in:
03
Topics:
Health care