Is dementia really on the rise?

Carl Campbell seeks to uncover whether dementia-related mortality is deteriorating, as well as the potential impact on critical illness (CI) insurance claims 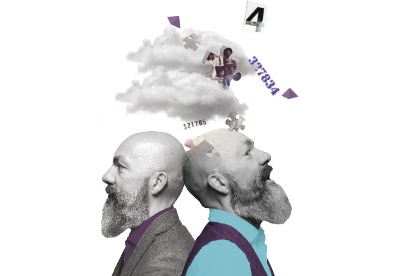 Dementia has become one of the leading causes of death in England and Wales. This has coincided with population mortality exhibiting low levels of improvement at older ages in recent years.

A number of factors have distorted past patterns in dementia deaths:

Our analysis shows that the increasing pattern in dementia-related deaths may well be explained by these factors alone.

The impact of Alzheimer's and dementia on CI remains uncertain. There is some evidence that underlying incidence could be reducing. However, awareness and recorded medical diagnoses are increasing. The impact on insured CI incidence will depend on knowledge of cover under CI policies, extent of cover, and insurance versus clinical thresholds.

Dementia refers to a range of conditions that lead to a deterioration in brain function. The symptoms vary depending on the part of the brain impacted but often include memory loss, communication problems, behavioural changes, impaired judgment, inability to plan or solve problems, and difficulties with movement.

Figure 1:The most common dementia types 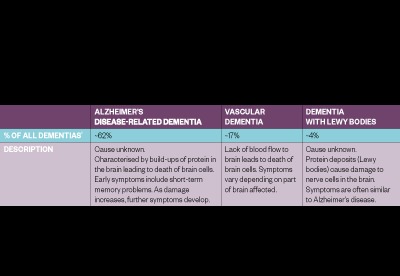 Dementia does not cause death directly but increased vulnerability makes death by other causes more likely. There is generally a gradual decline in the ability to perform everyday functions. Complications include:

One analysis of autopsy reports concluded respiratory diseases (including pneumonia) were the ultimate cause of death in around 50% of cases (Brunnström, H. et al). Cardiovascular related deaths are much higher for vascular dementia. Following diagnosis, average life expectancy is around five to ten years, depending on type and severity of dementia.

Dementia causes damage to the brain which builds up gradually. Usually, by the time symptoms become obvious, damage can be very substantial and cannot currently be reversed. While there is no cure for dementia at present, targets were introduced at the 2013 G8 summit to find a cure by 2025. However, the current lack of understanding of what causes dementia makes this an ambitious target.

The bold lines in figure 2 show how overall population mortality attributed to various causes has changed since 2001 (after standardising for the ageing of the population but before changes to cause of death coding methodology over time).

Mortality attributed to dementia increased dramatically over this period, with 2015 dementia-related mortality around three times the level seen in 2001.

However, the Office for National Statistics (ONS) has made changes over time to how underlying causes of death are recorded which have impacted dementia significantly. These changes reflect revisions to the International Classification of Diseases (ICD) to identify the earliest event in the causal sequence leading to death.

This resulted in significant increases to recorded dementia-related mortality, having been reallocated from groups including cerebrovascular diseases and pneumonia. The dashed line in figure 2 shows overall population mortality attributed to Alzheimer's and dementia after adjusting for changes in these cause of death coding methods over time. After allowing for the changes to cause of death coding methods, recorded levels of mortality attributable to dementia haven't increased as dramatically but have still approximately doubled between 2001 and 2015. From 2007 to 2014 the increase was around 5% per annum. In 2015 alone the increase was around 20%.

This is an alarming pattern, but over this period there have also been initiatives to significantly increase medical diagnoses of dementia, and a spike in 2015 overall mortality, both of which could be contributing to this pattern.

In 2015, a spike in overall mortality was observed compared to prior years. Deaths were much higher than expected in winter months (including for dementia). The failure of the flu vaccine to protect against the strains of flu in circulation was a contributing factor.

The precise reason why dementia deaths were so heavily affected is not immediately obvious, apart from greater general vulnerability, but could well represent random volatility, rather than a real underlying effect. 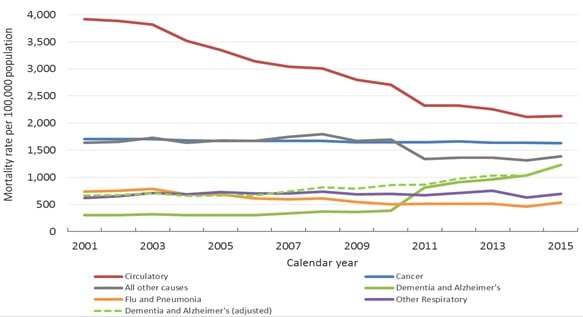 Government initiatives have been key drivers of increasing dementia diagnoses. These have included the National Dementia Strategy (2009) and the prime minister's Challenge on Dementia (2012). The NHS set targets to diagnose 67% of all underlying cases in 2013 and incentives were introduced to pay GP practices £55 per diagnosis between September 2014 and March 2015.

The impact can be measured by the diagnosis rate (defined as the number of people diagnosed divided by estimated prevalence). Figure 3 shows how this has changed over time.

This could lead to increased mentions of dementia on death certificates and more recordings of dementia as an underlying cause of death. These increases in the diagnosis rate closely mirror the increases seen in dementia-related mortality seen in Figure 2 and so could be a key explanation.

In recent years there has been a shift away from 'hidden' unrecorded cases of dementia. Dementia could therefore have been under-represented in cause of death statistics. Now that the extra recorded diagnoses have come through it may be more a case that the new level of dementia mortality represents a more accurate reflection of what was there all along. 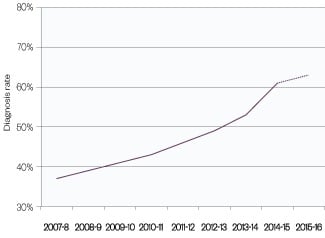 The question of whether incidence has been changing over time is difficult to answer using national diagnosis statistics, due to the changes in awareness and diagnosis practices mentioned above. It is important to consider the total incidence of dementia, whether diagnosed or not.

Studies that attempt to use stable measurement methods over time can provide insight into trends in underlying incidence. The World Alzheimer Report 2015 included an analysis of available studies. While there was a range of results across the studies, making it difficult to reach firm conclusions, the report found that "evidence for a decline in the incidence of dementia is perhaps marginally stronger".

In the UK, the Cognitive Function and Ageing Studies (CFAS I and CFAS II) covered a small, but representative sample of geographies with around 5,000 lives interviewed under each study. Observed dementia incidence reduced by around 1% per annum between 1993-95 and 2011-13. The reductions were seen in almost all gender/age groups, with larger reductions for males.

While the signs from this study are encouraging, further studies with consistent design, measurement methods over time, and large enough sizes are needed to provide definitive conclusions on the current and future direction of incidence rates. The government initiatives to increase funding for research are a positive development in this regard.

A further consideration is whether the increase in medical diagnoses outlined in figure 3 could lead to increased awareness and claim rates on insured CI. The impact will depend on awareness of cover under CI, extent of cover, and insurance versus clinical thresholds. It will also depend on how many of the increased diagnoses are genuinely new/earlier diagnoses or were previously known but not formally recorded.

Stability in the future

A number of factors, such as an ageing population, changes to coding methods and increases in medical diagnosis rates have distorted past trends in dementia-related deaths. However, a stabilisation in the diagnosis rate may well lead to more stable levels of age-standardised dementia mortality in the future. Also, we have seen that underlying dementia incidence could be reducing, though the picture is, as yet, far from clear. Further evidence of this and of the interaction with increases in medical diagnoses is required to understand the potential impact on insured CI claim rates.


Carl Campbell is a basis development actuary at Munich Re

This article appeared in our March 2017 issue of The Actuary.
Click here to view this issue
Filed in
03
Topics
Health care