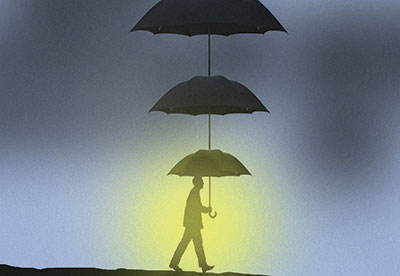 Life companies are increasingly challenged in delivering guaranteed solutions, owing to such factors as ultra-low interest rates (especially significant in the US and Europe) and changes in the regulatory and accounting treatment for insurers writing guarantees (Solvency II in Europe or GAAP in the US).

This shift in market dynamics has not gone unnoticed by the investment banks, which accrue significant derivative revenue from life companies hedging out the market risk associated with writing these guarantees.

As a result, a market innovation first developed by an investment bank almost 10 years ago is now gaining proper traction.

The concept in question is iCPPI (or individualised constant proportion portfolio insurance), also commonly referred to as micro-CPPI or in some cases, individualised time-invariant portfolio protection (iTIPP).

Evolution from CPPI to iCPPI

CPPI is a risk management trading strategy used since the 1980s to determine a portfolio's allocation between growth assets (intended to provide the investment returns but involving risk) and risk-free assets (for capital protection).

iCPPI uses exactly the same mechanism as CPPI, but rather than applying it to a pooled set of assets (many policyholders invested in the same CPPI fund), it operates at the individual policyholder level (hence 'individualised' or 'micro'). It thereby allows a life company to provide protected or guaranteed solutions fully tailored and bespoke to the individual policyholder. Furthermore, and perhaps most importantly, the market risk associated with providing such guarantees can be precisely and fully hedged out to a third party (typically an investment bank) at a fixed fee, to provide protection against catastrophic market movements that the CPPI approach cannot capture. This leaves the life insurer with the residual 'actuarial risk' that it is arguably best positioned to manage.

The alternatives to iCPPI are derivative options or reinsurance solutions, both of which present their own challenges. If one considers variable annuities, for example - a core product in the US and in parts of Europe - derivative options remain the dominant means of hedging out market risk. However, the risk cannot be perfectly hedged, the cost is variable (and significantly higher than that for iCPPI) and such a hedging programme introduces earnings volatility as a consequence of its accounting treatment. Reinsurance may offer the attraction of a perfect hedge but is expensive and not practical on a large scale.

The growth of solutions

The slow take-up of the iCPPI concept since it was devised in 2007 is owing to a number of factors. First, life insurers were preoccupied with dealing with the credit crisis, following which significant actuarial resources in Europe were needed to implement Solvency II. In addition, a number of the large UK life companies were investing heavily in platform technology to counter the competitive threat from the non-life insurers, diverting resource away from other strategic initiatives. Finally, a number of European life companies had built their guarantee capabilities around offering variable annuities and were reluctant to abandon this means to invest heavily in an alternative hedging capability.

Fast forward to today and many of these barriers have either disappeared or become less relevant. Recovery from the credit crisis is largely complete, the EU's Solvency II capital regime is now in force, UK life companies have either built a platform capability or have chosen not to compete in this space, while there is greater recognition of the cost in offering a variable annuity programme, resulting in some market participants withdrawing these products or at least significantly paring back the benefits.

Behind the scenes, and despite the challenges noted earlier, there has been a slow but steady take-up of the iCPPI concept among a select number of life insurers, and momentum finally appears to be building. This will not be immediately obvious, one reason being that the investment banks have often sought to ensure their involvement in providing iCPPI hedging solutions is hidden behind confidentiality clauses with their respective clients. In addition, the life companies themselves (Germany and, to a lesser extent, Italy being notable exceptions) have often been reluctant to highlight the CPPI techniques sitting behind their guarantees.

iCPPI techniques are currently being used in the US, widely across Europe and also in Asia. Insurers involved include a number of the largest global players as well as smaller regional players. Figure 1 provides a short selection of iCPPI based products in the public domain and where some respective marketing material can be sourced from the internet.

? The iCPPI concept has been in existence for several years now with a number of investment banks willing and able to provide the hedging capability

? The technique is now used by a small but significant cohort of life insurers, and perhaps most notable, among a number of the world's largest

? Products using this technique are now represented across all three key insurance regions of Europe, North America and Asia

? A number of external factors have held back the wider adoption of this technique in recent years, but most of these factors have either disappeared or become less relevant.

With these points in mind, there is a sense that a point of 'inflexion' has been reached with regards to the wider adoption of the iCPPI technique. With the outlook for interest rates in the short to medium term remaining unchanged, the regulatory and accounting environment continuing to push life insurers to find more efficient means of hedging, and policyholders continuing to seek out certainty of outcome, all this suggests that iCPPI is on the cusp of a broader market acceptance.

However, can we expect to see a large number of new iCPPI-based investment propositions being launched in the coming year? Despite the commentary above suggesting this might well be the case, the reality is likely to be a slow albeit increasingly steady adoption of the concept.

While a number of external factors have been the primary cause of slow take-up, the key challenge and constraint going forward is likely to be internal, and herein lies the conundrum. The primary reason for this is that a successful iCPPI implementation is largely technology driven. While life companies are well positioned through their actuarial resource function to model and price new guaranteed solutions, they typically lack the knowledge and experience of large-scale system integration projects, which are ultimately at the heart of an iCPPI project. Hence, with generic product launches typically being actuarial led, but an iCPPI implementation demanding a heavy dose of technology expertise, there is a risk that the right resource is not staffed to deliver such an ambitious project.

For the life companies that can navigate this challenge, as a number clearly have already, the potential rewards are attractive - capital-efficient guarantees, meeting a clear and ongoing customer need, whose market risk can be perfectly hedged, at a fixed and reduced cost compared with the typical variable annuity.