With-profits funds are in terminal decline, and many are closed to new business. But these funds will need careful management over their remaining lifespans, says Tim Sheldon 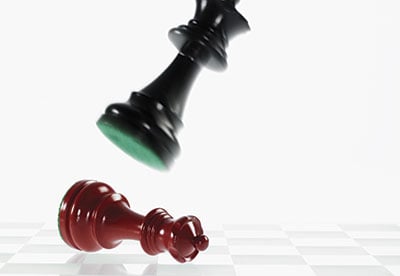 The fair treatment of policyholders in closed with-profits (WP) funds is one area in which actuaries are called upon to provide advice. One important area is the distribution of the estate.

While a WP fund remains open to new business, its policyholders cannot, in general, expect any distribution from the fund's estate. But expectations change on closure. Then the manager is required to prepare a run-off plan. The Financial Conduct Authority's Conduct of Business Sourcebook (COBS) states: "The run-off plan must include a plan to demonstrate how the firm will ensure a fair distribution of the closed WP fund and the inherited estate (if any)."

What constitutes a fair distribution? Prior to closure, a WP fund will already have in place established methods and processes for determining bonus rates and the fair treatment of policyholders, and it is likely these will continue after closure. That leaves the issue of a fair distribution of the estate.

An IFoA working party report on The Management of WP Funds in Run-Off was published in November 2014. It is a comprehensive piece of work covering all aspects of WP fund run-off, including ways of distributing the estate and fairness.

The report makes the point that fairness is subjective. While there will certainly be differences in opinion on whether a particular approach to estate distribution is fair or not, there are some approaches that might be regarded as fairer than others, as well as some that might generally be regarded as unfair.

"The primary ways of distributing the estate are by enhancements either to asset shares or to claim amounts (see figure 1 from the IFoA working party report). The most common methods of asset share enhancement are a simple uplift or an increase to the annual rate of investment return credited to asset shares. These would not usually be guaranteed but would vary over time to reflect the ongoing experience of the WP fund. Enhancements to claims can be made through additions to bonus rates, but these would generally be assessed through the use of asset shares.

As a very simplified example, take a fund with asset shares of £100m and assets of £110m. The estate is then £10m. Asset shares could therefore be enhanced by 10%, or future annual rates of investment return might be increased by 1% pa say, calculated to use up the £10m over the fund's remaining expected lifetime. This example ignores important factors such as guarantees, but the principle is the same. 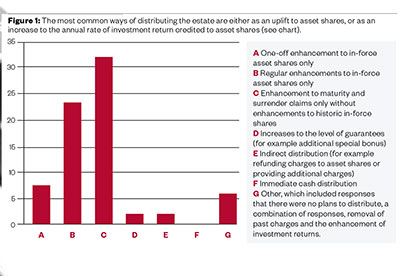 A mix of methods

On the face of it, the first method might be regarded as being the fairest, especially in the absence of any special considerations or constraints. The second method, however, which leads to the estate being distributed roughly in proportion to elapsed duration from closure, has been frequently used in the past, particularly by weaker mutual funds. Its rationale is that those policies with the longest durations to run bear the most future risk and rewards them accordingly.

Is it, however, fair to those leaving in the short and medium term? After all, they have borne the risks of the fund for longer in the past, and if any current policyholders have made a contribution to the estate it is more likely to be those whose policies have already been in force for longest at the date of closure. It would, of course, be possible to combine the two methods, an approach which has also been used in practice.

Most WP funds have received declining levels of new business over many years and have therefore had ample time to prepare for impending closure and distribution of the estate. In such conditions, it would be possible to commence estate distribution prior to formal closure, especially if new business levels are minimal.

It might be considered appropriate to use part of the estate distribution to improve the returns of policies that have performed relatively poorly or that have not fulfilled original expectations. One obvious example would be mortgage endowment policies, many of which are now maturing with a shortfall. Even if that is not considered appropriate, the method of estate distribution should perhaps be chosen so that those policies are not discriminated against by receiving a lower share of the estate than others.

The main constraint on estate distribution is likely to be the continuing need to meet capital requirements. This can be an acute problem in weaker mutual funds, many of which have opted for a 'safe haven' approach, whereby the fund sits within a stronger company with capital support available from the host company. This problem should be of less concern in a proprietary fund, where external support can be provided by shareholders.

What if a WP fund is unable to meet its regulatory capital requirements at the date of closure? A natural course of action might be to delay estate distribution until capital adequacy has been restored, but is that fair to all groups and cohorts of policyholders? Why should policyholders leaving the fund in the shorter term be required to forgo any share of the estate so that the financial position of the fund be improved for the remaining policyholders? Policies leaving in the near term, which by way of their longer duration may be more entitled to a share of estate than policies effected more recently, get nothing, while the undeserving recent new entrants gain enhanced security and scoop the entire estate when they leave.

Such a solvency position can be serious for a mutual with no external support. But there is a useful precedent of a WP fund continuing to operate at a solvency level lower than the standard 99.5% under the ICAS regime, with the agreement of the regulator, to enable a fair distribution of the estate to commence without undue delay. In effect, the status quo solvency level is allowed to continue.

The same approach could easily be followed in a proprietary WP fund, with any additional capital supplied externally by shareholder funds. This would seem a perfectly fair and reasonable approach, especially if the shareholder has provided capital support prior to closure, irrespective of whether there might have been an aim to run the fund on a self-sufficient basis. Indeed, why should the shareholders not be willing to provide some support in exchange for their shareholder transfers from the WP fund? To delay distributing the estate in these circumstances until the fund is able to meet its own capital requirements seems to favour the shareholders over policyholders. It seems very questionable whether such an approach could be considered fair and balanced, especially if, as has been the case in many WP funds, the shareholders have benefited from the use of estate subsidies in the past. If shareholders really are unwilling to provide the support required to enable a fair distribution of the estate, should they be entitled to continue to take transfers from the fund?

Many WP funds have charged for the costs of guarantees and options in the past. Should this continue when a fund closes? Provided there is an inherited estate, the working party report referred to above suggests as a first step that such guarantee charges could be refunded, and this certainly seems reasonable. It would surely be unreasonable to make further charges after closure while not making any estate distribution.

An estate distribution that either delays distribution or benefits policies maturing in the longer term significantly more than those maturing in the shorter term in effect leads to a form of tontine. This may not matter if the estate is relatively small, but for estates of around 5% of asset shares or greater, it can be very material.

A fair and balanced approach involves steering the closed WP fund between the risks of a tontine and of running out of money and not being able to maintain bonus distributions consistent with those made prior to closure. It is perhaps natural for actuaries advising on such matters, and for management, to err on the side of caution and hence towards the former. However, a tontine is unlikely to be considered fair and could lead to claims being made by policyholders who left the fund shortly after closure.

There should be less need for such deliberate navigation bias today with all the benefits of Solvency II, for which many funds have paid a high price. With the resulting improvements in risk management, there should be far less concern about managing long-term solvency, enabling estate distribution, which is demonstrably fairer.

Fairness may be less subjective than we imagine. Every day in our courts, justice is delivered by juries drawn at random from the population. It has generally served us well for many years. Perhaps in assessing fairness in practice we should ask: "What would a jury say in a court of law?"

This article appeared in our February 2017 issue of The Actuary.
Click here to view this issue
Filed in
02
Topics
Life insurance