Banking on building in Brexit Britain

Domestic investors, notably pension funds and insurers, have been adding UK infrastructure to their portfolios in the past few years, as the asset class provides longer duration cashflows to match liabilities and its liquidity premium enhances yield. Infrastructure is a pillar of economic development, and therefore will be subject to the changes in the economic, political and investment landscape that are expected to materialise following the result of the Brexit referendum. Moreover, as infrastructure represents a large fraction of total fixed capital formation and is a primary vehicle for public expenditure, it will play a crucial role in shaping the UK's economy during and after Brexit implementation. This complex, dynamic environment provides an intellectual challenge that makes some actuaries feel like a child in a sweetshop.

Brexit will most likely entail an unprecedented change in the UK's regulatory and institutional environment, which affects internal economic growth and the relationships with the EU - the UK's main trade partner (accounting for 43.8% of exports of goods and services in 2015) - and with the rest of the world. The growing political and social tension in Scotland and Northern Ireland has also boosted the (already high) level of uncertainty, as the economic policy uncertainty index shows.

In the aftermath of the Brexit referendum, gilt yields reached historical lows. This is the combination of increased perception of risk with the Bank of England's subsequent expansionary reaction and additional measures, which are intended to pre-empt potential disruption in lending markets. Along with interest rates, and with the increased uncertainty, the British pound has declined around 10% and 14% versus the US dollar and the euro respectively, reaching multi-decade lows.

With policy uncertainty soaring, real investment is likely to be subdued, which would dent economic growth in the short term. Furthermore, the erosion in purchasing power from the decline in the currency is expected to bolster inflation in the coming months. The combination of policy and institutional uncertainty, lower economic growth, higher inflation expectations, lower yields and weaker currency affects valuations of both existing and planned infrastructure assets.

In the base case scenario of short-term economic slowdown and lower yields, most infrastructure assets are likely to preserve or increase value relative to other investments, for several reasons:

In summary, existing infrastructure projects should be able to withstand the economic slowdown and uncertainty spike scenarios. Valuations may be positively affected, owing to the combination of steady cashflows and lower interest rates, with contained risk premia.

However, some sub-sectors that bank on the UK economy's openness may be an exception to the aforementioned positive effects; commercial real estate valuation growth started gaining momentum in 2013 and peaked at the end of 2015. International demand was a catalyst for transaction price growth, especially in London. These investors did not always seek to capture the economics of the property, but rather used the assets as means to preserve value and for their relatively high liquidity. The downturn in valuations started in early 2016, triggered by the changes to Stamp Duty in the March 2016 budget, which introduced an extra transaction cost that made these assets less competitive internationally. Legal uncertainty from Brexit is amplifying this effect, as London's status as a global financial hub is questioned, which could eventually lead to weaker demand, lower rents and more scarce liquidity.

Furthermore, Brexit may also have negative consequences on valuations of future infrastructure projects: 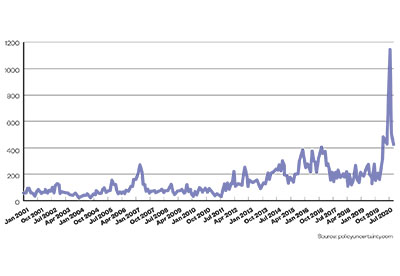 Although the lower interest rate environment contributes to the decrease of the overall funding cost, the combination of systemic policy uncertainty from Brexit and project-specific cashflow uncertainty may increase risk premia for projects in greenfield stage.

Although the post-Brexit policy, institutional and economic framework is yet to emerge, the reaction from some investors is to postpone upcoming investment projects and to re-evaluate ongoing ones. This is particularly critical for foreign investors, which are generally more sensitive to regulatory changes that may affect their fixed investments in the UK. The UK has historically developed strong ties in investment with EU countries, which represent a large fraction of both direct and portfolio investments.

The most evident implication on capital availability of Brexit is the potential discontinuation of the European Investment Bank's funding programmes. The EU has developed a number of budget and finance programmes for infrastructure development.

The European Investment Bank (EIB) and the European Fund for Strategic Investments (EFSI, aka Juncker Plan) are worth noting for the large size of resources available and their focus on infrastructure:

In a Brexit scenario in which the UK no longer has access to the schemes above, the UK government could set up comparable ones domestically. However, in the meantime, funding available for new infrastructure projects will most likely be reduced. Furthermore, as those new schemes would be subject to the UK's fiscal constraints (as opposed to the broader EU ones), availability of funding in the long term would most likely be less stable and more correlated with the dynamics of the domestic economy.

Domestic investors, notably pension funds and insurers, have been adding UK infrastructure to their portfolios in the past few years, as the asset class provides longer duration cashflows to match liabilities and its liquidity premium enhances yield. The outcome of the Brexit referendum, with lower yields, has made liabilities of defined benefit pension funds grow in excess of their assets, enlarging the size of the historical funding gap. Furthermore, the lower yields also trigger second-round effects on the pension funds' and insurers' asset-liability management programmes, as duration from liabilities increases and these investors often struggle to find non-government investments that can meet their long-duration requirements. As a consequence, the lower-yield environment has increased long-term investors' need to search for yield, which is increasing demand for infrastructure investments.

Capital supply for infrastructure from the public sector is also likely to become increasingly available as the UK government may continue with the infrastructure investment plans that the former leadership had defined. Prior to the referendum, the UK government had made infrastructure investment one of its priorities. In March 2016, the government released the National Infrastructure Delivery Plan (NIDP), which identifies projects currently being developed and planned for the 2016-21 period. The total size of the investment is around £300 billion over the period, with nearly 50% of it coming from private sources. Although the NIDP stretches over different sub-sectors, it is worth noting that the bulk of the investment focuses on transportation (rail, roads, airports and ports) and energy projects.

From the public side, a major obstacle to the execution of the NDIP could be funding. Although the chancellor of the exchequer announced after the referendum that the deficit reduction goals are likely to be relaxed, the slower economic growth and potential tax cuts may absorb part of the resources that could be allocated to infrastructure development.

The Brexit referendum has made the growing discomfort with the EU re-emerge, which may also threaten new infrastructure development. Although the NDIP focuses on England and acknowledged devolution plans for Scotland, Northern Ireland and Wales, the risk of Scottish secession could jeopardise certain large-scale, country-wide projects.

The high degree of uncertainty that Brexit has created has had a positive effect on valuations of existing infrastructure. However, it will most likely have a negative effect on the expected returns of future projects, as well as investment dynamics. This creates a more challenging environment for investors (including insurance and pension funds), which have additional pressure to get returns from an asset class that is expected to be fundamentally less yielding.

As international investors retrench, the UK government and domestic investors may find it easier to get access to the asset class and continue to support infrastructure development.

This article appeared in our December 2016 issue of The Actuary.
Click here to view this issue
Filed in
12
Topics
Professional