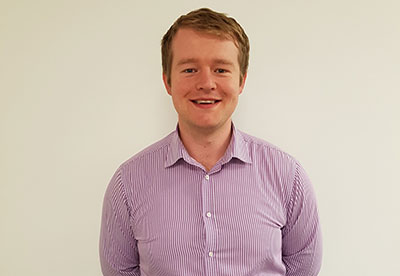 He said "pleasant mannered and dependable".

I find learning to be very motivating.

I would copy my school's motto 'I fyny for nod' - 'aim for the highest' in Welsh.

Stewart Lee and Nick Offerman for entertainment, Ray Mears so we would survive, Angela Merkel to lead us and Jennifer Lawrence so people would bother to look for us!

People tell me it's reading manuals for appliances. I would have thought that's a normal thing to do when you buy something, but apparently not.

I like to cycle and to play computer and board games. I also have a bad habit of subscribing to magazines.

My brothers and I steering a canoe into bushes with our friend sat at the front. It was a sort of mutiny. For the environmentalists: there were no animals living in those bushes.

Actor - since that's what people excitedly think I've said when I say actuary.

Under Pressure by Queen. I'm avoiding reading too deeply into its meaning, but it is a great song.

Being quite risk averse, I can make a mountain out of any molehill. Probably riding

If you could be anyone else, who would it be?

This article appeared in our November 2016 issue of The Actuary.
Click here to view this issue
Filed in:
11