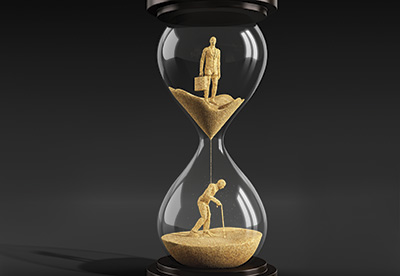 One remarkable feature in the Brexit debate, in which migration became such a heated issue, was that hardly a word was said about the far bigger issue of population ageing. What a pity those special referendum Question Time programmes didn't inform us more; with an educated public able to focus on the issues that really mattered, who knows whether things might have turned out differently?

In fact, we have been talking about the 'demographic time bomb' for some time.

The implications of increased longevity, expectations that in future people will be working longer before retirement, and the enduring gap between life expectancy and healthy life expectancy, are familiar to readers of The Actuary, though there remains a worrying naivety about such issues among the public at large.

The policy solutions are cast in a paradigm of 'extending working life'. However, while the idea of 'live longer, work longer' may well offer a neat policy solution, the older person on the cusp of retiring may need some convincing to remain working for one, two or more years longer.

Not shy at retiring

Evidence from a recent study by researchers at Nottingham Trent University emphasises how ingrained into management practices and organisational cultures are many of the irritations and frustrations that make people desperate to retire at the first opportunity.

So there is a palpable need to consider issues like recruitment and support of the older worker. For policymakers, the challenges of retaining and supporting an ageing workforce includes re-skilling them to do new jobs -

jobs they are often experienced in and well able to do, even though they lack the proper qualifications to gain positions with new employers at the present time.

The formula for supporting the older workforce has been distilled into a simple government message to businesses - 'recruit, retain, retrain'. Retraining and helping people to change careers, supporting their recruitment by challenging discrimination and helping them to continue in existing roles by adapting their conditions of employment are well recognised objectives, although businesses need to do more to achieve them. This, at least, is the message of a new report issued by the Centre for Ageing Better and Business in the Community (bit.ly/2d3fjVb).

A lot has happened since the government's policy response, Fuller Working Lives, was published in early 2015. The minister for pensions, Baroness Ros Altmann, who was also appointed as the minister responsible for the policy following the May 2015 election, has now stood aside to be replaced by Damian Hinds, the minister for pensions and employment. The 'recruit, retain, retrain' message, while hardly original, was the headline of her policy and owed something to her period as 'older workers' business champion' when she toured the country talking to voluntary groups, employers and workers about these issues. It remains to be seen whether Hinds will want to tweak the message now that he has replaced Altmann, though it is understood that he is equally passionate about the ageing workforce.

It seems obvious that a more joined-up, multi-departmental strategy is needed, with holistic solutions around business and enterprise, skills, health, community engagement and welfare to work. Too much of the responsibility for the policy lies with the Department for Work and Pensions while the Department for Business, which is better placed to work with employers, seems less engaged with the issues, not to mention the Department for Health.

Today there is no longer mandatory retirement in the UK and we have had legislation against age discrimination since 2006. Both measures have clearly made a difference to people who are choosing to work beyond their state pension ages. But while the government may claim to have increased the average age of exit from the workforce, early exits are just as numerous as they have always been. Much focus has been on people working beyond 65 though the priority could be better stated as keeping people from quitting early. Incentives to retire early are distinctly passé.

Today the average age of exit for men is about 64 - one year before male state pension age. Women typically quit the workforce one or two years earlier than men, but again we have some who are working longer. In Korea, Mexico, Chile, Iceland, New Zealand and Japan, men and women typically retire later than the age known as 'normal retirement age.' This may in fact owe more to the lower frequency of early departures from lifetime jobs rather than a cultural tendency to extend working lives.

Looking into the future, as governments raise state pension ages, and by implication offer a yardstick for a normal age of retirement, there will always be people both working longer and opting out earlier. This is not to say we can't change things, but we will have to do some of them differently. Raising state pension age will never be a sufficient policy tool to influence retirement ages and will bear unfairly on the least well-off.

Changes and well-intentioned announcements have been made in many false dawns. In fairness, there has been change but clearly there has not been enough innovative policy to bring about the kinds of cultural changes towards retirement and work that we see in Norway, Sweden and countries in the Far East, where working significantly later is common. Ministerial statements of the severity of the problem and the need to act, uttered as long ago as the year 2000, could be quoted with equal validity today.

Today, 8.56 million people aged 50 to 65 are in work, and the employment rate for this age group is 70.7%. Now we have 1.2 million people over 65 in employment, though the large majority of these work part time or are self-employed. Some 10.6% of Britain's over-65s are in work, even though they are less active than in the US, where 25% of over-65-year-olds are in paid employment. Much of the emphasis on proactive policies has come about through European initiatives, including comparative research highlighting innovative approaches in Finland, Germany and the Scandinavian countries. Much of this was led by Eurofound, an EU-funded research agency based in Dublin.

The other side of the coin is the lack of any specifically targeted support for older jobseekers. Many older people who are out of work experience great challenges that can't be dealt with by simply putting them through the same 'jobs first' welfare-to-work approaches offered to other younger unemployed people. Governments' welfare-to-work programmes have, with very few exceptions, lacked the specific targeted approaches for older workers that might have addressed the alienation experienced by many older jobseekers.

Older people often face complex barriers and problems relating to their health, skills deficits, difficulties with their self-image and the problem of being committed to a particular kind of job that perhaps they can't do any longer. A few past programmes and niche sources of funding have allowed for targeted support for the older jobseeker, but since 2008 the only group to receive such attention has, by and large, been younger people. Valuable specialist tenders offered by the Big Lottery and the European Social Fund are small in scale compared with the size of the problem.

Overall then, the prospects and policies for Britain's ageing workforce to remain engaged with employment must receive a mixed report. There have been changes but not enough. Whether the glass is half full or half empty depends on the point of view. Those with appreciative employers in jobs they enjoy and conditions adapted to their needs will take the optimistic view. Those seeking work, facing multiple barriers to returning and anxious for a system that will offer them more structured support are likely to look pessimistically at the dregs and stale wine waiting for their consumption and hope for a more generous refill.


Dr Chris Ball is a specialist adviser on the ageing workforce for charity and welfare-to-work provider Shaw Trust
This article appeared in our November 2016 issue of The Actuary.
Click here to view this issue
Filed in:
11
Topics:
Professional