Cancer a diagnosis for the future 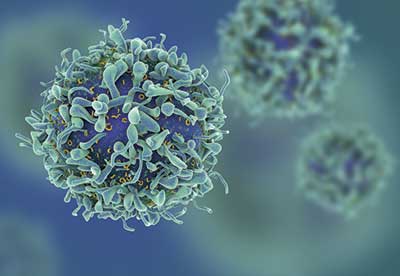 "New, cheap, highly accurate saliva test will tell you at home in just 10 minutes if you have cancer" - such promising headlines in respect of saliva and blood tests appear in the media on a regular basis. With such eye-catchers, the general public has been informed about promising medical research in the field of cancer diagnostics. Gen Re has conducted its own research within the medical community to gauge what these emerging techniques imply for pricing and claims handling in insurance, especially critical illness (CI) products, where protection against the risk of cancer plays an important part. According to Gen Re's Dread Disease Survey and claims statistics provided by UK insurers, cancer is the cause of more than 60% of all CI claims.

The continued success of CI cover depends on establishing effective risk management in the area of pricing, risk acceptance and claims management. In pricing, we need to be able to forecast future claims rates with reasonable accuracy in a changing medical environment (which has implications for which events meet the claim definition). In risk acceptance, we need to mitigate the risk of anti-selection caused by asymmetric information owing to availability of genetic testing. At the same time, the management of claims must be dealt with in a practical, cost-effective, transparent way; in line with what the customer expects when they submit their claim.

New technology currently in development - focusing on circulating tumour cells (CTCs) or circulating tumour DNA (ctDNA) testing for solid cancers - certainly has an impact on the way a cancer diagnosis is made. The new technology may also lead to additional cancer claims or bring diagnosis forward in general. We can already observe changes to the way cancer is managed and treated and can expect further developments with consequent improvements to the mortality

Currently, cancer is diagnosed or confirmed by histopathological evidence from a tissue sample extracted in a biopsy and examined under a microscope. This methodology is essential for diagnosis of almost all cancers, unless the tumour site means taking a tissue sample is too risky (for example, in the brain).

Results of the histopathology, together with physical examination and imaging tests, form the basis of cancer staging. Staging is the method of describing the extent to which a cancer has grown and spread, either locally or to distant sites in the body.

The most prominent emerging techniques are based on blood samples - often combined with DNA sequencing methods - referred to as 'liquid biopsies.' These are targeted at finding CTCs or ctDNA, which are rarely found in healthy people or in people with non-malignant tumours.

CTCs in the peripheral blood were first described in the 19th century. More recently, methods have been developed for detecting, isolating and characterising CTCs in multiple different cancers arising in solid organs. The stage at which a tumour may shed tumour cells into the bloodstream is not fully understood by medical scientists and is assumed to vary by tumour type, size or aggressiveness. However, for advanced cancers, CTCs are present only in very low concentrations in the blood, with even a significant part of samples from patients with metastatic carcinomas in various cancer sites showing no detectable CTCs.

Testing for ctDNA, which originates from tumour cells and can be also found in the blood of cancer patients, can provide opportunities for minimally invasive cancer diagnosis, prognosis and tumour monitoring. In the context of cancer, testing for ctDNA involves finding known mutations identical to those in common tumours. ctDNA testing may miss the cancer DNA if the test is not specifically aimed at the mutation that exists at that time. The need to test for separate cancers means ctDNA is unlikely to be useful for screening all cancers. Testing for ctDNA is thought to be simpler than testing for CTCs, and there is more ctDNA than CTCs detectable in the blood of cancer patients. Most studies include numbers based on detectable ctDNA in people with advanced malignancies or tumours that are already large enough to be diagnosed easily using current techniques, again aiming at improved outcomes in these patients. However, with ctDNA there were also a significant number of samples without detectable ctDNA in patients with a confirmed cancer diagnosis.

Ready for use in diagnosis?

It is important to be clear that neither of the new liquid biopsy tests have been developed purely for cancer diagnosis. The vast majority are being applied to patients whose cancer diagnosis has already been made with conventional methods. The goal in using the new technology is therefore to improve outcomes in cancer patients, and this will remain the focus for the near future.

Despite this clear focus, media attention has been on the tests' potential as diagnostic tools. Clearly, the idea of a simple blood test to find cancer is appealing, in contrast to the often burdensome requirement for a tissue biopsy. Research is just starting on patients who have early-stage cancer, but it is not clear if the currently available tests will prove to have any value. A liquid biopsy is therefore not useful for screening at this time, because the test accuracy is unknown, with experts arguing that this remains a long way off.

The vast majority of publications discuss the application of CTC or ctDNA testing in patients with advanced cancers for improvement of treatment and prognosis, and only rare studies apply these as diagnostic tools. While there are examples with some diagnostic potential in niche areas like screening high-risk patients or testing for virus-induced cancers, issues around the tests' accuracy seem to remain. False positive results are a key issue, creating unfounded anxiety and unnecessary treatment, rendering the current tests ill-suited for application as diagnostic or screening tools.

In summary, the majority of current research and biomarkers up for testing are highly tailored to the cancer site; no promising 'catch-all' technique is in the pipeline. While some correlation between positive results of blood tests and tumour size appears to exist, the influential factors for the outcome of any such test are not yet fully understood.

The current Association of British Insurers (ABI) definition of cancer (excluding less advanced cases) requires the finding of "any malignant tumour positively diagnosed with histological confirmation and characterised by the uncontrolled growth of malignant cells and invasion of tissue". Discussions with medical experts show a consensus among them that histopathology is most unlikely to be replaced as the gold standard in cancer diagnosis in the near future. This is expected to change only if, and to the extent that, new diagnostic means provide added value - that is, more detailed information on staging and/or adequate treatment.

Even if the technology is available, its wide application is not necessarily a certainty. To be used in population screening in the context of national health systems, any of these tests will have to successfully pass high hurdles in terms of evidence-based accuracy, cost-effectiveness and treatability of additionally detected cancers, which experts expect to take probably around 15 years based on the need for large-scale population studies.

In the private sector, however, the outlook is different. The rapidly falling cost of DNA sequencing, combined with the amount of venture capital flowing into private biotech companies, will lead to tests being offered in the private sector, which is not subject to the same formal hurdles as in the public sector. Such tests could be of interest to high-net-worth individuals, who might undergo such tests in exchange for a potential pay-out of the sum insured under their CI policy or take out a policy after learning their risk or diagnosis.

What to expect for claims management?

While these new technologies develop, it makes good sense to revisit the language of the CI benefit trigger, especially in a standard definition context, where changes to any definition can only be implemented after a comprehensive process of discussion and incorporation of feedback. In fact, already today we need to think about a potential future scenario where new tests may lead to vastly different evidence requirements for cancer claims than that common today.

A positive CTC or ctDNA test result alone would not fulfil the current standard cancer definition in the UK protection market. However, should liquid biopsies become the gold standard for cancer diagnosis and have proven excellent accuracy, this may change.

How to deal with implications for pricing?

Current pricing assumptions are based on historical experience observed in the context of the historical diagnostic tools. The challenge is to phrase the definition in a way that ensures a similar level even with the advent of a new technology. The UK, with its traditionally guaranteed premium rates in the protection market, clearly faces a different challenge compared to other markets where reviewable premiums are the norm. Considering different scenarios, one could imagine a future where cancer is detected more often or earlier than today. It is also imaginable that the majority of neoplasms are detected in very early stages and can be successfully treated so that eventually the burden of invasive cancers is reduced. This could actually have a positive effect on incidence rates and would improve mortality markedly.

With cancer being the leading cause of claim under CI insurance, its diagnosis has the strongest impact on the insurers' claims experience. The new blood tests described here are still in their infancy but have the potential to overhaul the diagnostic process - with yet unknown consequences for the frequency of cancer detection.

Much depends not only on continued technical progress of the new technology but also on how national health services will promote its use in combination with existing screening programmes and how availability and take-up emerges in the private sector. Even if the diagnostic approach does not undergo dramatic change immediately, it is possible that different levels of cancer incidence rates than those we currently observe will emerge in future.

In CI, it is important to review disease definitions regularly, adjusting them to the highest standard in terms of being future-proof and following objective, measurable severity criteria. Already, more generous ABI+ definitions are widely available in the UK market. Appropriate severity criteria are important in order to prevent CI products from becoming unaffordable if the cover shifted from substantial support in the case of a life-threatening disease to a pay-out for a minor one where no substantial insurance need exists.

Applying in-depth expertise to assess the progress in cancer diagnostics will allow insurers to continue to offer the fullest range of living benefits to those most in need of financial support following a serious illness.

Karin Neelsen joined the life/health unit of Gen Re in 2007. She heads the product underwriting team within research and development
This article appeared in our November 2016 issue of The Actuary.
Click here to view this issue
Filed in
11
Topics
General Insurance