Is it time for investors to give the green light to green bonds? Kate Brett and Christina Teague report 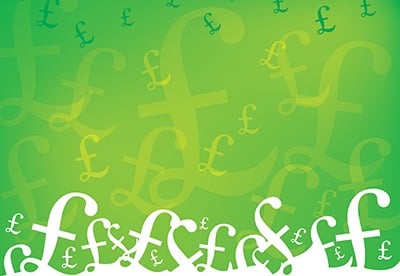 There is a growing awareness of the impact that climate change is having on our world. Increasingly, investors are seeking to understand how this process will affect their investment portfolios. To do so, they are using scenario analysis to identify future risks and opportunities.

More than two centuries of economic development has been underpinned by access to cheap fossil fuels. However, global policymakers have signalled their strong intent to lower greenhouse gas emissions. The most significant development in this area was the recent signing of the Paris Agreement, as confirmed at the December 2015 UN Climate Change Conference (known as 'COP21').
The goals agreed at the conference involve keeping emissions low enough to contain global temperature rises to within 2°C this century, relative to pre-industrial levels. However, while a shift toward a low-carbon economy has begun, given that the world has already surpassed 1°C of warming, it is anticipated that the policy response to mitigating climate risks will become increasingly urgent in the coming years.

Investors will increasingly identify projects related to the shift to a low-carbon economy that require financing.

In other words, policy action is expected to drive investor action once again and further increase the demand for products such as green bonds.

Green bonds, also known as climate bonds, are a form of debt expected to play a significant role within this growth. Nearly a decade after the first green bond was launched by the European Investment Bank (EIB) - the Climate Awareness Bond in 2007 - the green bond market has developed from its nascent form into an area that large-scale investors are pursuing more actively.

As with any developing area of the market, many questions remain. However, there is potential for significant and rapid growth. Historical barriers, including standardisation, supply and market scale, are beginning to be overcome - and we might just be seeing the green shoots of something much grander.

The meaning of green
One of the barriers that has held back investors is a degree of scepticism that 'green' actually means 'green'. Investors are sensitive to self-labelling and are increasingly aware of products failing to behave as expected in terms of delivering a measurable and meaningful impact, be it environmental or social. Tales of 'greenwashing' abound, and, while there remains no universally agreed standard or definition of a green bond, as the market has developed, the concept has become more standardised.

The Green Bond Principles were launched in 2014 to help address this concern.

The Green Bond Principles
Initially published in January 2014, and updated in June 2016, the Green Bond Principles are voluntary process guidelines that recommend transparency and disclosure, and are intended for broad use by the variety of actors participating in the market. The principles are designed to provide the information needed to increase capital allocation to environmentally sustainable purposes, without any single arbiter, and are built around four core components:

Two years on, more than 30 investors, 25 issuers and 55 underwriters have become registered members of the Green Bond Principles.

In addition to the Green Bond Principles, the World Bank, the Climate Bonds Initiative and environmental, social and governance (ESG) data providers, such as Sustainalytics, are developing recognisable standards for the industry and providing independent verification regarding the environmental impact.

Ultimately, investors and their advisers will need to be satisfied that investments meet their environmental requirements. Nonetheless, investors should be increasingly confident the industry is heading in the right direction. 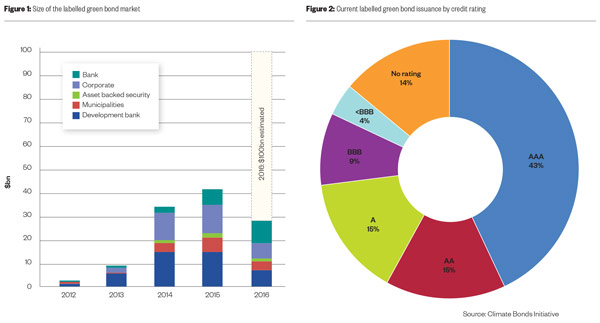 As always, supply and demand dynamics are crucial to understanding the future of the green bond market.

In addition to considering the risks and opportunities posed by climate change, investors are increasingly focused on integrating environmental, social and corporate governance factors into their decision-making process.

They now recognise that these factors can and should be considered in fixed-income investing.
The Green Bond Principles acknowledge the application of the 'use of proceeds' bond concept to themes beyond the environment, such as bonds financing projects with social objectives or with a combination of social and environmental objectives.

The World Economic Forum's Global Risks Report 2016 ranks the top five concerns over a 10-year horizon as: water crises, failure of climate change mitigation and adaptation, extreme weather events, food crises and profound social instability. In this environment, it should come as no surprise that demand for products such as green bonds is rising.

As the green bond market grows, it is also overcoming some of the barriers that have historically made it difficult for institutional investors to allocate capital in this area. While there are still relatively few dedicated green bond products, investors are increasingly growing their existing bond mandates to accommodate green bonds. The majority of mainstream index providers have added green bond indices to their library, including Standard & Poor's, Bank of America Merrill Lynch and MSCI.

However, supply remains limited - and the increased demand has led to a majority of green bond issues being oversubscribed. While this is a positive indicator of their popularity, it has raised concern that green bonds could be overvalued based on traditional financial metrics. However, over time, as the market scales further, it is anticipated that supply will increase to meet the additional demand.

Where next?
The Green Infrastructure Investment Coalition (GIIC) was launched at COP21 in order to facilitate increased investment in green infrastructure on a country-by-country basis, particularly in emerging markets. The partnership, which counts the UN-supported Principles for Responsible Investment (PRI) initiative and the Climate Bonds Initiative among its founders, is now supported by over 30 participants across the investment industry including investment managers, asset owners and investment consultants.

The future looks bright for the green bond market. Investors are finally starting to analyse and comprehend the level of low-carbon infrastructure required. Undoubtedly, significant investment opportunities will arise as countries strive to meet their emission-reduction targets under the Paris Agreement. It is our expectation, therefore, that investors will increasingly give green bonds the green light.

This article appeared in our September 2016 issue of The Actuary.
Click here to view this issue
Filed in
09
Topics
Investment