Step into the great unknown 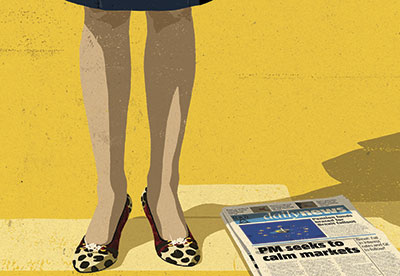 It's hard to imagine a time when there was more uncertainty, at least in living memory.  The most recent comparison is the global financial crisis that started in 2008. Then, nobody knew exactly what exposure the banks had, which threatened the stability for the global financial system. But there was action that could be taken: governments promised to keep the wheels turning, liquidity was created, new regulations were introduced.

After the recent referendum, however, we only know that something may, or may not, go wrong. Free movement between the EU and the UK could continue, or it may not.

UK companies may continue to trade free of tariffs within the EU, or they may not.
Some companies may take some or all of their business out of the UK; indeed, some countries may take themselves out of the UK. Not only are we wondering how new leaders of political parties will cope, we don't even know how many political parties there are likely to be!

This uncertainty means that even if a company decides where it will be based, it does not necessarily know what costs it will face, which markets it will be able to access, or even what legislation will be in place. Will the UK want to keep Solvency II? Might it have to?

One type of risk that has already been subject to analysis is that present in financial markets. The effects so far - bearing in mind that I am writing this in early July - have been surprisingly limited.
Equities appear to have hardly suffered, although the impact of sterling's depreciation should not be ignored. Nor should the extent to which income for UK-listed companies is actually derived from overseas. The fact that sterling's depreciation is likely to result in inflation for the UK should also be remembered, so those equities might not buy so much. For pensioners whose benefits are linked to inflation with a cap - whether it is 5% or 2.5% - this may mean falls in the real level of income. And while this would clearly be bad for them, it could help to reduce pension scheme deficits. However, the impact on expected growth has caused bond yields to fall: good for government bond returns, bad for pension scheme liabilities.

This is good also for firms that want to borrow; even banks - again, at the time of writing - seem to be better prepared for this crisis than the one in 2008.

Invested interest
How should other investors react to the current uncertainty? Risk management is difficult in times such as these. Indeed, it might seem like it is too late to do anything; to misquote George Osborne, the roof should have been fixed while the sun was shining.

In terms of financial risk, it is easiest to start with what investors should not do - and that is to make any sudden changes to strategy. This is not to say they should do nothing. Investment strategies should be reviewed not just periodically but also when there is a major event. I think we can agree that we are in the middle of a major event. However, it is important not to confuse a change in long-term investment strategy with a call on the market.

When reviewing the investment strategy, it is also important to consider risk through a number of different lenses. In particular, it is not enough to look at the potential returns on investments and the uncertainty around these numbers, particularly in relation to a set of liabilities; it is also important to look at cashflow profiles. Cashflow modelling, where the ability of assets to cover liability cashflows is assessed, should already have been completed. However, it is important to make sure that the anticipated cashflows still appear likely to arrive. Furthermore, if assets will need to be sold to cover benefit payments over the coming months, liquidity in these markets should be monitored.

All of this also implies that the assumptions underlying these reviews should be revisited.
Expected returns may have fallen, along with interest rates, while assumed credit losses may have risen. All of these factors should be assessed.

One type of strategy where a tactical change in asset allocation may be more justified is a glide path strategy. Such strategies, which involve moving an asset allocation from high to low risk over time, are increasingly common for both defined benefit and defined contribution investors. In this case, the challenge is to work out whether investments have changed price because of changes to fundamentals or because of sentiment. In the latter case, this might mean there are opportunities that ought to be exploited.

Mind your own business
Compared with investment risk, managing business risk is more difficult. The first stage here is to get a clear handle on what the risks are to a particular business. There are many factors, and some will be more relevant to some firms than others. For example, there may be potential changes relating to taxes or tariffs that could hinder trade in the EU. It may become more difficult to employ staff from the EU, and there may be a fall in the demand for products or services owing to cross-border difficulties. If the result of Brexit is a slowdown in the UK economy, this may also hit demand.

In order to assess the potential risks, a number of different tools can be used. For example, risk prompt lists can suggest areas where risks may occur. Alternatively, risk-focused process analysis - which involves looking at what could possibly go wrong with every stage of a firm's business - could be used to ensure that all aspects of a firm's business are considered.
Within these tools, different techniques can then be used for identifying risks. Tools include approaches such as brainstorming and independent group analysis - which can result in a broader range of potential risks being identified - and surveys.

The next stage is to look at the potential impact of the risks identified, as well as - and this is particularly difficult - looking at the likelihood. After this, it is time to look at how risks might be mitigated, and what the cost of mitigation might be. Then - and this is the really hard part - a decision needs to be made on how to respond. And, in due course, the impact of any decision needs to be assessed, and the range of risks faced needs to be reassessed.

However, it is important to consider that even the risks identified above could also lead to benefits. Might partial exclusion from the single market mean better trade deals elsewhere in the world? Might it reduce competition in the UK from continental competitors? Might it be easier to recruit skilled workers from outside the EU? Upside risks, as well as downside, need to be considered.

In particular, if the cost of a negative outcome is being assessed, any associated benefit must also be taken into account.

There is still, of course, great uncertainty. This makes me particularly nervous as I have to submit this article some weeks before publication, so there is a strong possibility that it will be out of date by the time that it comes out! However, uncertainty is no excuse for inaction. Hopefully, many firms carried out much of this analysis before the referendum, and there already seems to be evidence this is the case. But even for these firms, the work identifying and responding to risks should continue - as should always be the case.

Paul Sweeting is head of research at Legal & General Investment Management, and professor of actuarial science at the University of Kent
This article appeared in our August 2016 issue of The Actuary.
Click here to view this issue
Filed in
08
Topics
Risk & ERM