Sally Bridgeland, Master of the Worshipful Company of Actuaries, talks with Stephen Hyams about flexible working, investments, and charitable endeavours 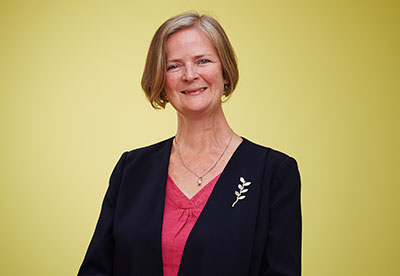 Having led one of the UK's largest pension funds through the financial crisis, and recently been appointed as the very first female Master of the Worshipful Company of Actuaries, Bridgeland is used to trailblazing into unknown territory.

We meet her at her home, so it is fitting that the conversation starts with flexible working - a subject close to her heart - and which led her to set up the charity Executive Shift, which aims to promote such working practice for executives.

Bridgeland explains: "I started working three days a week when my son was born about a decade ago, and I have been working flexibly ever since." As chief executive of BP Pension Trustees in 2007: "I was the first group leader at BP who had ever worked part time, and it made me realise I was leading the way. That brings a sense of responsibility, which is behind why Executive Shift was formed." It aims to conduct research, promote best practice and shift attitudes about how executives and their teams can work.

Although Bridgeland acknowledges that the right to ask for flexible working has made it a lot easier for people whose real needs were being ignored, she admits: "There is still a difficulty with people asking to work in this way, because the culture of presenteeism acts against it." She cites that the charity Working Families deals with about 3,000 cases a year of people who want to work flexibly but can't, so they end up resigning or going back onto benefits. She sees the dilemma for part-timers. "The assumption made is you must have part-time commitments, so what is it about this job you want to do less of?"

At the senior level in particular, she believes that while more women are now the main breadwinner, "we are still stuck in work patterns established by the Victorians" and that "it is still difficult to say you want to work in a different way, to go against the trend".

Bridgeland is keen to point out that flexible working can have significant benefits for employers too. She notes: "More progressive employers have done studies to show it results
in their only needing 60% of the office space.

It just needs a bit of co-ordination to make sure everybody doesn't turn up to the hot desks on the same day." She says it requires rethinking working practices and remuneration strategy, as well as investment in technology, but says:

"As long as you are well organised anything is possible."

When challenged whether flexible working could also have some drawbacks through a reduction in face-to-face interaction, particularly for more creative roles, Bridgeland responds: "That depends, some people are most creative when there are others prompting and challenging them, while I have my best ideas when on my own."

All in all, Bridgeland believes flexible working is a win-win situation: "The flexible worker feels grateful and loyal to the employer and will give more as a consequence."

Investment matters
The subject turns to investments and I ask about her experience as chief executive at BP Pension Trustees Limited during the 2008 financial crisis. She remembers wondering what was she supposed to do with £10bn, "because you can't exactly get it out of the bank and shove it under a mattress".

They were fortunate, she explains, in having secure cash and credit holdings, in being well funded and having a sound sponsor at the time. The aftermath of quantitative easing, combined with the 2010 Deepwater Horizon oil disaster, led to a major rethink and desire to derisk. "People are much more sensitised to avoiding loss than feeling good about the gains, which is quite different from the 1980s when it was all about doing better than somebody else."

Bridgeland believes trustees need to become much more strategic and develop a business plan with the sponsor for managing the pension scheme: "Conversations with the employer tend not to happen, and I do think the regulatory environment has mitigated against that." She notes there are shared objectives of paying benefits, and early discussion can help avoid later conflict.
The Local Pensions Partnership, where she chairs the investment committee, is a new concept for local authorities. Key investment decisions remain at a local level but implementation is managed centrally, rather like a mutual fiduciary manager. As Bridgeland explains: "People are seeing the benefits of having a much larger arrangement with economies of scale" - a concept she believes will become more commonplace to deal with legacy pension arrangements and auto-enrolment.

This leads us neatly on to NEST, where Bridgeland is a trustee. Set up by the government especially for pension auto-enrolment, she explains there are 100,000 employers involved, and it has an ongoing obligation to share this diversity of experience and data with the wider market.

It is clearly a role she relishes: "I love being part of NEST, and it's quite interesting also being involved with Royal London, who are in the pensions market. It's a very healthy market and there's a lot of innovation and competition, which is fantastic."

Charitable thoughts
We turn to the Worshipful Company of Actuaries. Bridgeland's involvement in this livery company can be traced back to 2002, when she got her Freedom of the City of London certificate. She joined the Court of the Worshipful Company in 2012, the same year that she ceased serving on the management board of the IFoA and after a long period serving on Council.

She likes both the charitable side and the heritage.

"You are part of a tradition that goes back to medieval times. Because we haven't got our own livery hall we go on a tour over the course of a year for our meetings. There are some amazing places tucked away that you get access to, and it's a different network as well."

The Charitable Trust is part of the Company and has donated about £1m to charities over the past five to six years. "We are looking for charities that have not been reached, where an actuary has developed an attachment or affinity and where a few thousand pounds would make a difference. We try to have a relationship for two or three years."

Bridgeland has chaired the Educational Committee, an area she speaks of with passion. She is particularly proud to have sponsored a substantial increase in the number of maths masterclasses run by the Royal Institution, which help to stretch talented school pupils. They have also sponsored a large project with the Royal Society looking at how maths education helps develop reasoning skills. "This has been useful input into the issue of maths education beyond age 16, something we are not good at in the UK," she says. Current activities include encouraging schools to share teaching resources; a project to look at how maths is taught in primary schools; and the Tower Hamlets Business and Enterprise Trust, which is open to volunteers from the profession.

Bridgeland is enthusiastic about her impending role: "The Master is ambassador for the Company. I can't help seeing links and opportunities, and that's what I enjoy most. Being Master will be a great opportunity to do that, both with the City of London and through the other livery companies." She goes on to explain how this will help promote the role of actuaries both in the UK and worldwide, and how maintaining a flow of new members is important. There are currently about 300 members and, while the number is limited by statute, openings exist. "We have had quite a few younger women joining us recently. I don't know whether it's dressing up for dinner, certainly one of the things I enjoy, but also the charitable and education side does seem to appeal to a diverse group of people." She adds that the social events are open to non-members and are a good introduction.

On her general philosophy, Bridgeland comments: "My mantra is be kind, gentle, polite and helpful; taking the time to find out what you can do to make things easier. People like that are those I aspire to be."

Her career has been shaped by bucking the trend. "The most important people in my life have been the positive thinkers who, despite the prejudices, have supported me." She refers to the primary school teacher who recognised her maths potential aged six, when it was unusual for a girl to be picked out, and those who suggested an actuarial career when she did not want to follow the convention of becoming a teacher. This takes courage, something Bridgeland clearly has in abundance.
This article appeared in our August 2016 issue of The Actuary.
Click here to view this issue
Filed in
08
Also filed in
Interviews