I am from Rio de Janeiro, Brazil, but I also have a Portuguese background. 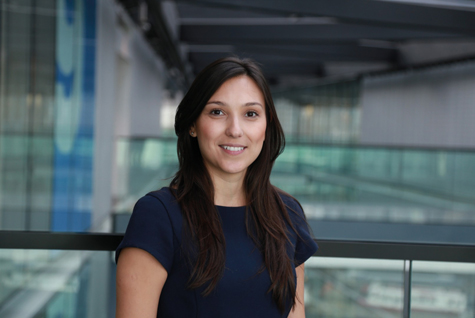 I am from Rio de Janeiro, Brazil, but I also have a Portuguese background. Ever since I left Brazil for the first time in 2008 I realised I love travelling because it allows me to see the world with my own eyes, make friends from different cultures and gain experiences for life. Another passion is dancing because it helps me to relax after a long week of work and study.

Which actuarial field do you specialise in ?

While working in EY Brazil, our team was so small that we didn't have such a breakdown so we would work in all of the actuarial fields, but mostly pensions. However, when I moved to the UK in October 2015 I decided to give myself the opportunity of a new beginning and chose to focus on non-life.

Why did you decide to study this degree?

During high school I discovered my fondness for numbers and I was sure that I wanted to purse a career where I could develop my mathematical skills. After reading a Brazilian magazine called the Student's Guide that described the main activities ofmany professions, I decided to become an actuary.

Which actuarial society are you a member of?

I am a member of both the Brazilian Institute of Actuaries and the IFoA.

Which actuarial fields are most dominant in Brazil, and why?

Pensions, life and health. The population as a whole suffers from a lack of good public healthcare and so the priority of every Brazilian citizen is to have a private health plan. The social security system benefits are also not enough to guarantee a reasonable living for seniors and so there is an increasing awareness that it is necessary to start saving for the future during the early stages in life.

Tell us a bit about the area in which you work?

While working in Brazil I was focused on the actuarial assessment of post-employment benefits in accordance with IFRS standards. However, since I arrived in the UK I have been involved in non-life reserving and have just started working on a Solvency II Pillar 3 project.

What kind of support do students get in your company, and elsewhere?

In Brazil, in order to be a fully qualified actuary we have to complete our BSc in Actuarial Science, and pass one single exam from the Brazilian Actuary Institute. The international exams from The Society of Actuaries (US) and the IFoA are becoming popular as an additional proof of technical capabilities, however, as it is not mandatory in Brazil, the companies tend not to give any, or very little support. Here in the UK, EY give us a great package including study leave and exam support. As far as I am aware, it is better than many consulting firms and major insurance companies.

Are you involved in any actuarial activities outside of your day job?

I have only recently moved to the UK and am still taking my time to settle down and organise my working and studying life before I commit to other activities.

Could you tell us about an interesting project you have worked on?

I lived in Angola for two years. The activities included designing and implementing short, medium and long-term remediation actions in areas such as revenue, budget and treasury. These were two of the best years of my life because I had the chance to work with so many people from all over the globe that became my friends, and at the same time, I had the once in a lifetime opportunity to be in such a unique place as Africa.

What do you believe are the social and economic drivers for actuarial work in Brazil?

In Brazil, the 1988 Constitution exacerbated the imbalance between contributions and benefits, granting a group of benefits without the contributions counterpart. Mistakenly, this lack of a link makes the employee interpret the contribution as a tax and the retirement pension as a right.

Today, the social security deficit precludes a reform with a decrease in the government participation. The balance in the social security account is impossible to achieve unless there is implementation of a methodology based on actuarial calculations. However the politicians are not willing to take non-popular decisions.

There is one annual event and a few technical committees aiming to develop actuarial work demanded by the market or government agencies. Recently the institute has been trying to establish a constant training agenda so all its members are aware of the most important market and technical topics.

How do you see the role of an actuary evolving in the future - can you see actuaries working outside their traditional sectors?

Definitely yes. I believe that one of the most powerful learning tools is the simple exchange of experience and thoughts. Our world is getting more interdependent, and the best way to understand it is to gather our strengths and different skills together with the main purpose of building a better working world.

How often and in what way do you use social media?

I am not a big fan of social media for personal use but I tend to use it for professional purposes, as I can be on top of the world's breaking news and market information almost instantaneously. Being connected definitely impacts my business understanding as a whole.

What have been the influences that shaped your career decisions to date?

I have always felt the need to be constantly learning, and whenever I was feeling comfortable it was time to change something because I believe the world is such a huge and beautiful place with numerous options and we should seize the maximum it has to offer.

I built my learning path by changing offices three times in Brazil, living in Angola for two years, and taking a year of non-paid leave to pursue a MSc in Actuarial Science in the UK after being granted the Chevening Scholarship funded by the Foreign Commonwealth Office.

Could you tell us about your immediate and longer term goals?

My immediate goals are to qualify and build a strong knowledge of the non-life market in the UK. The longer term goals would be to continue learning something new every day because that's how we grow as a person and as professional.

How will you celebrate the day you qualify?

I would probably give myself a few trips as a reward and start looking for something new to focus on. Challenges are the fuel of my life.

What was the motivation behind the decision and how long do you envisage staying abroad?

So far, I'm during my second work experience abroad and I'm starting to realise that being abroad is like being home for me.

As I have mentioned before, I am really curious about the world and different people and places, so every chance I have to explore it I will definitely take.

My first long experience abroad was in Angola where I lived for two years under restricted conditions due to the sensitive nature of the project. It was my decision to leave the project after two years as I realised that the most precious power we all have is freedom and I was missing mine.

After I finished my MSc degree I realised my learning curve was slowing down in Brazil. That's when I started planning my move to the UK, taking one of the hardest decisions in life; to literally take one step back in order to take two steps forward.

I basically re-started my entire career almost from scratch but I am really happy with my work here and I feel I am blessed for being able to have such a great team.

What are the main professional differences between Brazil and the UK?

Working in Brazil and the UK is completely different mainly because the market is a lot more solid here. Brazil is trying to keep up-to-date with the accounting best practices but it is really behind in terms of Solvency II, for example.

As a third-world country, Brazil still has huge market penetration potential but this is highly correlated to the economy, which is currently walking towards the worse recession in Brazilian economy of all time. In summary, as the market is a lot smaller, so is the complexity of it.

How did you find this opportunity?

EY is a global company and I have been working for them in Brazil for many years. After I made my decision I spoke with one of the partners and he got in contact with the UK team.

By chance I was on holidays in the UK and came for an interview and everything went well. They made me an offer and I accepted.

What do you say when asked, "What is an actuary"?

I try to make my response as simple as possible by just saying that I measure and manage risks for insurance companies and pension funds. Normally people reply "this sounds complicated" and the topic ends, but for some reason if the chat continues, I use the traditional car insurance pricing example.