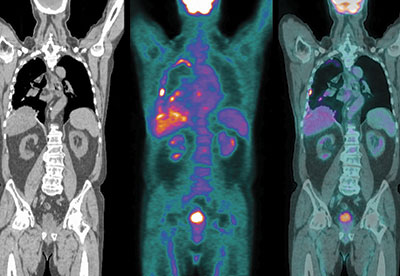 By 1954, Australia was the fourth-largest consumer of asbestos cement products (after the US, United Kingdom and France) but with the highest per capita consumption. Given that most mesotheliomas, cancers of mesothelial cells, are caused by asbestos exposure, it is no surprise that Australia has had the highest per capita incidence of mesothelioma, with around 700 cases per annum in recent years. Most asbestos was used in the cement manufacturing industry, with a quarter of all new Australian houses clad in asbestos cement in the 25 years after the Second World War.

Recently, we were asked by the Asbestos Safety and Eradication Agency (ASEA) to analyse and project cases of mesothelioma in Australia, to support discussions around asbestos exposure and inform policy options. ASEA is an Australian Government agency providing a national focus on current asbestos exposure and covering workplace health and safety, environmental and public health matters.

Historically, asbestos-related disease studies have focused on the first and second waves of exposure (see Box 1 below). ASEA asked us to also consider the third wave. This is important owing to the prevalence and popularity of home renovations in Australia.

A second difference from other approaches is that our model allows for exposure from asbestos removal, as well as consumption. Removal often happens decades after consumption. Lastly, we projected cases of mesothelioma diagnosed, not claims for compensation. Our projection was calibrated to the number of mesotheliomas from 1988 to 2014, to fit cancer registry data over this period. Future cases were projected from 2015 to 2100.

Exposure-based approach
We used a population exposure and incidence model. This was calibrated to observed cases and their known characteristics, such as age, gender, exposure periods and known sources of exposure.
We prepared a most likely 'base' scenario (described in Box 2, below) but also tested alternative scenarios to highlight uncertainties. In particular:


Key assumptions and judgments
While the data was complete in many respects, some exposure information was missing. This necessitated some important judgments.

Surveys were used to collect data on occupational and non-occupational exposure sources; up to 2015, only 17% of cases provided this information.

We assumed that this subset is representative of all mesotheliomas, after testing for reasonableness.

Also, where a patient had both occupational and non-occupational exposure, the former is a much more likely source of risk. We allowed for this in the risk weights in our model.

Background mesotheliomas have unknown or unidentified past asbestos exposure.

We assumed that these currently comprise 5% of all mesotheliomas, consistent with other studies and data. In our base scenario, the background cases comprise the majority of mesotheliomas for the period after 2050.

Figure 3 shows the base scenario projection. In this we project 19,427 cases of mesothelioma diagnosed between 2015 and 2100. Some 58% of cases are attributed to the run-off of 'industrial' exposures from the first and second waves. The remaining 42% come from the third wave (including background mesotheliomas).

There is significant uncertainty surrounding our projection, owing to incomplete information and because outcomes are dependent on future events. Figure 4 (below) shows the range of results from plausible changes in model parameters. These changes lead to total future mesothelioma counts being around a third higher or lower than our base scenario.

Raising risk awareness
Many mesotheliomas in the past emerged from small exposed populations receiving relatively large doses of asbestos exposure (for example, workers at the blue asbestos mine in Wittenoom). But now we are observing an increasing minority of third-wave cases. This exposed population is much larger but mostly faced much lower levels of exposure than the high-risk occupations. Many of these individuals will be unaware they were exposed to asbestos.

Current asbestos exposures are significantly lower than they were up to the 1980s. However, these exposures will still give rise to mesotheliomas. Governments, employers, trade unions, regulators, tradesmen, asbestos removalists and households should take reasonable precautions when dealing with asbestos in future to reduce this risk.

Raising awareness of the risks is important. The legacy of asbestos is different in each country; Australia has a large residual exposure in its housing stock, exacerbated by the current popularity of home renovation. Nevertheless, many of the issues we have identified are relevant in other countries that used asbestos.

Brett Riley and David McNab are principals at Finity Consulting 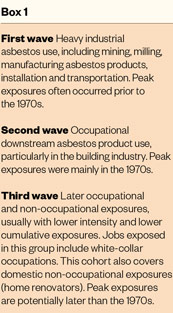 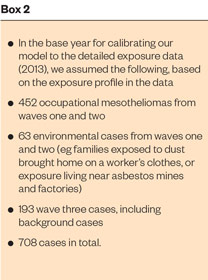 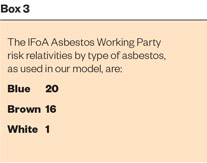 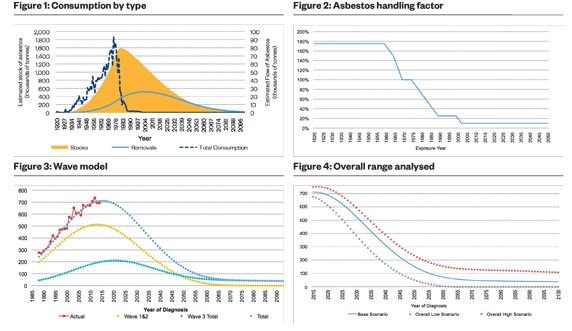 Brett Riley and David McNab are principals at Finity Consulting
This article appeared in our July 2016 issue of The Actuary.
Click here to view this issue
Filed in
07
Topics
Global