Leading the debate on research 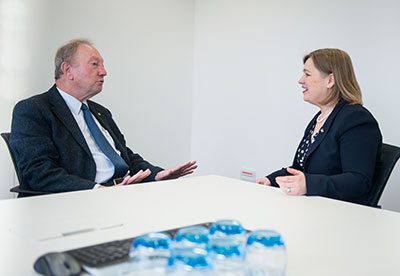 Thought leadership is one of the key aspects of the IFoA's recently refreshed strategy paper, and is also the theme for incoming president Colin Wilson (see http://bit.ly/2a4YOG4). To explain the development of the Actuarial Research Centre (ARC) and the recently announced research programmes, Mark Cross, lay chair of the IFoA's Research and Thought Leadership Committee (RTLC), and Sarah Mathieson, IFoA's head of research and knowledge, talk to The Actuary. We begin by discussing their respective backgrounds and roles.

The RTLC was formed following the IFoA's 2011 strategy paper, which recognised that research is one of the main platforms of activity for the profession. It took a while to decide on how best to formulate the committee, what it would do, and who would chair it. The decision was made to bring in someone from outside. The question was whom? It didn't have to be an actuary, but someone who had a grasp of the context and of technology in the work of actuaries. It also had to be someone with experience in setting up and delivering research in the 21st century.

I was fortunate to be chosen to chair the new RTLC. I was previously pro-vice chancellor for research at the University of Greenwich. Prior to that, I was vice-president of the Institute of Mathematics & Its Applications and a professor of engineering. I have spent my life building mathematical models, going through the same angst as actuaries; conceiving models, finding data, checking models, and ensuring reliability. I have also run a couple of companies and my own private pension fund, so I have some experience of finance too.

I am a life actuary and started my career at Standard Life. As well as traditional actuarial functions, I have been fortunate to work in a number of different areas, including finance, sales and marketing. Following spells at Resolution, Pearl and Aegon, I joined the IFoA in 2011 as a policy manager.

Today, I manage the research and knowledge activities of the IFoA, including a number under the thought leadership banner. As well as managing the IFoA's commissioned research projects, my team supports the publication of the IFoA's two actuarial journals and the Longevity Bulletin, library services and administration of prizes and awards. While we work across the IFoA executive to deliver the IFoA's research agenda, underpinning all of this is the work of the volunteers.

It is vital that volunteers are shaping the research programme to ensure it is relevant to the work of our members, and that any commissioned research complements the wide range that is undertaken by volunteer working parties.

What is the value in having a larger, defined research programme?

MC: I was initially astounded at how most of the IFoA's research is being done by members. Member-led research is about evaluating current issues and charting a way forward. By its very nature, this is problematic because it's resource-limited, although it is high in expertise.

SM: The IFoA has a high proportion of volunteers compared to other professions. I think actuaries like the intellectual challenge and the high level of engagement that driving the agenda and participating in a research working party brings.

MC: The first thing we identified was what the challenges were. One of the benefits of having much of the IFoA's research already undertaken by working parties was that, when RTLC came to assess the current gaps in research, it realised that these were the 'big ticket' items. The RTLC spent quite a bit of time putting together a 'key questions' document. We consulted with practice boards, and with industry. We hosted a town hall meeting with the academic community to do an open presentation to them and get their views. We were able to identify half a dozen 'big ticket' items.

SM: The challenges were actually global in scope, such as an ageing society, managing risk and climate change. So it was always going to be international in nature. Accordingly, we shared these key questions with some of the IFoA's sister organisations elsewhere in the world.

MC: The next step was to ask 'How do we address them?'. It was clear this was too extensive to do with a group of just eight people within a working party. This is where I could bring my contextual experience; working with other partners, and projects funded by industry in a single programme. I introduced this approach as a concept to the RTLC. Everyone looked a bit baffled to begin with, because it would mean competitors would be working together, and they questioned how universities and companies link up. However, my experience in engineering has found that bringing together industry and academia in well-defined research programmes is the most effective way to address significant challenges. These programmes also needed to span four to five years, and required at least £1m. This was something that was raised early on. I'm very pleased to say the IFoA gave me the nod to go ahead.

How did the process work to identify research projects?

SM: We put a call for research out in August 2015. Despite a tight deadline of eight weeks, we ended up with 25 proposals involving over 100 institutions from around 20 different countries. We then went through a thorough review process. Each proposal had five references, one of which was appointed by the IFoA - so a large number of references was needed to help inform the RTLC.

MC: The panel then spent a day going through them all. We had a pre-screening process to identify what couldn't be funded and which ones were viable. Some were not, owing to a lack of experience, or lack of connection to the actuarial user community. What mattered was not where it came from, but if it was closely tied in with the IFoA and could be used by the profession. Some were too theoretical or not related to actuaries.

SM: We were looking for multi-disciplinary teams, but they had to be relevant and deliver on what our members need. One we are supporting is on big data - it includes actuarial researchers, computer scientists, a medical school and an insurer. The other two also have international research teams.

MC: We then identified six serious candidates. Some came back as too expensive, and we had to be careful on costs. On those we took forward, we were absolutely uniform in our agreement as a panel. The committee - made up of IFoA members - voted on the proposals.

What areas do the research proposals focus on?

SM: The three projects are as follows:

?  Use of big health and actuarial data for understanding longevity and morbidity: the development of new statistical and actuarial methods in the use of big data, in the context of health and wider applications

At first glance, they might all look traditional. But looking beyond the titles, there are some genuinely innovative proposals here. The three programmes all have synergies, which mean they sit together well. You could say there is nothing there for general insurers (GI), but, in fact, with the big data proposal, the output could be useful for the GI industry. We think we have three programmes that are world-class, complement each other, and have application benefits for actuaries.

The RTLC also checked if there were any gaps we needed to fill imminently. The committee identified that we need to look at economic modelling and at behavioural risk. So it is currently considering whether to put out a call for two shorter-term projects, say two years in length

How do you ensure the projects produce useful outputs?

MC: Firstly, the RTLC has representation from each practice area, the editors of the IFoA's two journals, plus Sarah and myself. We have an external academic role with Andrew Cairns, who is the director of ARC. There is also a steering group for each project, so there is dialogue between the community and the researchers. And the oversight team will no doubt be more involved as it goes on. They don't formally start until September 2016 and we expect to start seeing some results in 2017.

SM: We will also champion the uptake in the community as we go along. We want a way for members to engage in the programmes and are exploring events and webinars for each of them so that there is some visibility from the outset.

In terms of outputs, we expect there to be reports, papers and other tools that can be used with the profession and beyond.

MC: Another output is the people working on it who will form a link to the profession. They will be a mix of post-doctorate and PhD candidates.

SM: Really this links to the original aim of the ARC, which was a Scottish board initiative and established in 2012. It started sponsoring PhD students, investing in the next generation of researchers and having research relevant to industry. Some initial studentships were also industry-sponsored. ARC is really an extrapolation of that. It will become the brand for our long-term research programmes we are doing as a profession; we are binding academia, industry and the profession together under this umbrella.

Why are links with the academic community important?

MC: The academic actuarial community is small but widely distributed. An academic organisation would be lucky if it had two or three faculty members.

SM: The ARC is about creating a network of researchers across our community. We have appointed three senior academics from around the world, who, as ARC directors, can bring expertise back into the RTLC. There is a role for us to play in facilitating this network. It is a community that can also benefit the Society of Actuaries and the Casualty Actuarial Society in the US.

MC: It's important that the IFoA is better embedded in the academic community. I am a Fellow of the Institute of Materials. There is a strong interactive link between the academic environment and industry; it's a question of how this is encouraged. I was surprised when I first joined, as there were only a few academic members on the RTLC committee; and none on Council. You'd think there would be more involvement by academics in the body that represents this industry.

What is the benefit of companies taking part in this research?

MC: First, they will realise it's not about keeping all research secret. It is being part of the process, and early access to new research. It's also a low-cost way to do research. Universities are set up to do it this way, and industry partners can help specify the project if they get on board early.

SM: Corporate partners also help us ensure the research is relevant for industry, and can feed into product development for example.

What do the new projects mean for member involvement in research generally?

SM: It's not about replacing member-led activities but about complementing them. The contribution of working parties is really valuable. We are also setting up steering groups for the programmes. Then there will also be knowledge-exchange activities, including workshops or webinars for members to learn about the research.

MC: I have always been amazed at the level of engagement and commitment to volunteering within the actuarial profession. That 'can do' attitude is great. So the research projects are not about marginalising members but about targeting them.

What will a successful outcome be from the research projects?

SM: For me, it's that members feel the research is internationally relevant. With two of the three proposals having international research teams, it means we are some way to ensuring this happens, and there is more work to do.

MC: Success is being able to use the results and applications of the research. Also, it's seeing the results being used outside the profession, so that we are seen as thought leaders.

This article appeared in our July 2016 issue of The Actuary.
Click here to view this issue
Filed in
07
Also filed in
Interviews