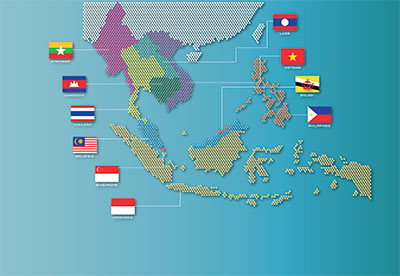 The first ASEAN Economic Community (AEC) Blueprint, signed in 2007, served as a comprehensive masterplan to chart the region's journey towards the formal establishment of the AEC on 31 December 2015. The AEC's vision is to integrate all 10 countries in South-East Asia and create a single highly competitive economic region and production base through the free flow of goods, services, investment, skilled labour and capital.

According to the official ASEAN website, this formal establishment was a major milestone in the regional economic integration agenda, offering opportunities in the form of a huge market of US$2.6 trillion.
Collectively, the region is the seventh-largest economy in the world, and, with a population of over 622 million people, ASEAN represents the third-largest market base in the world, behind only China and India.

The main challenge is that all the countries are at different stages of development, resulting in polarisation of standards and quality across the region. Nishit Majmudar, CEO of Aviva Singapore, proposed that economic integration across many countries is bound to be complicated owing to differences in politics, tax regimes, financial products, currencies, cultures and languages. Glenn Williams, CEO of AXA Life Singapore, admitted that the AEC could accentuate the range of disparities among the countries: "The economic community will highlight the range of maturity even further, with Singapore being the most developed," he says. "The key challenge will be that less mature markets will not catch up to Singapore very quickly, and Singapore will not relax its regulatory regime - so how do you harmonise that discrepancy?"

Synthesizing regulation
Harmonising regulatory regimes across all countries is another hurdle to overcome as this will take some time before being approved and implemented. However, regulators are starting to look at these discrepancies in order to strengthen capital requirements. On a global level, the International Association of Insurance Supervisors (IAIS), which represents all insurance regulators and supervisors, is advocating a global framework for insurer capital requirements.
Wan Saifulrizal Wan Ismail, president of the Actuarial Society of Malaysia, confirmed that most of the regulators have developed some form of risk-based capital framework. Malaysia, Singapore and Thailand have already implemented theirs, but these have not been implemented consistently across the entire jurisdiction. The risk here is that capital requirements that are too stringent may discourage insurers from taking risks in emerging economies.

In terms of human capital, free movement of labour will help elevate markets as talents learn new skills in more mature markets and take those back with them to their home markets. This is already happening in multinationals in relation to actuarial skills. Ken Ng, CEO of NTUC Income Singapore, believes the IFoA's qualification is an international passport and considered a brand that companies and regulators trust. Therefore, the AEC integration is potentially only a secondary issue to actuaries, as there is already active movement across the region owing to the high demand for actuarial skills.

However, Matthew Maguire and Raymond Cheung, president and honorary secretary of the Singapore Actuarial Society respectively, cautioned that, under the AEC, it could allow an actuary from one member country to sign off on accounts in another member country, and this could give rise to complications.

In order to meet the increasing demand of actuaries, the ASEAN Actuarial Talent Development Working Committee was formed in 2015, under the ASEAN Insurance Education Committee, with the mandate to discuss and propose solutions to bridge the actuarial talent gap within the region.
The working committee presented to the ASEAN regulators during the ASEAN Insurance Council meeting, held in Phnom Penh in October 2015, on some future plans to address the gaps.

So who will benefit in a new harmonised economy in South-East Asia?

Heng Zee Wang, deputy general manager of AIA Malaysia, believes that the dynamic changes of local markets and their populations will drive growth, and that an emerging middle class will want to buy more.

Alex King, managing director of Pacific Life Re, agreed adding: "Countries such as Thailand are starting to bring in a wider variety of propositions, which is good for consumers and net positive.
There will be more choice, more products, and the entire industry should grow."

Influence and integration
Other winners, according to Wan Saifulrizal, will be large companies that are able to co-ordinate activities better and adjust to competition in the local environments.

Chin Tze How, chief product officer of Allianz Malaysia, felt that regional players will do well in the integrated markets and that they will influence business in less developed countries.

On the flipside, there are some countries that are showing signs of protectionism against global brands, which goes against the AEC's vision.

Lastly, when will integration of financial systems take place? There was a consensus that not much will happen in the short term. There is a clear intention to drive closer relationships between member countries, but in reality there will be a lot of discussions before any true integration takes place.

It is envisioned that the formal establishment of the AEC in 2015 was not a static end-goal, but a dynamic one that requires continuous reinvention of the region to maintain its relevance in an evolving global economy. The AEC Blueprint 2025 has been subsequently introduced to guide the ASEAN economic integration from 2016 to 2025.

Looking at the decade ahead, ASEAN will strive to build on the early gains from AEC 2015 and be forward-looking in anticipating new opportunities and challenges. Effective planning and adequate resources are imperative to ensure successful outcomes of the community-building process and thus contributing to the aim of shared prosperity in future years.

Memoria Lewis is membership director and Caryn Chua is South-East Asia representative at the IFoA
This article appeared in our July 2016 issue of The Actuary.
Click here to view this issue
Filed in
07
Topics
Global