The new arms race against bacteria

Matthew Edwards and Nicola Oliver review the emergence of antibiotic-resistant bacteria, their plausible effects on mortality and recent progress in the development of new drugs

"One sometimes finds what one is not looking for," said Sir Alexander Fleming.

Although Fleming is credited with discovering antibiotics, their use has persisted throughout history, with evidence that the ancient Egyptians, for example, applied mouldy bread to infected wounds. Prior to Fleming's discovery, there had been a long period of scientific endeavour in relation to antibiotic development.

In 1640, John Parkington, a 17th-century apothecary, advocated the use of mould as a treatment. In 1871, Joseph Lister, investigating Sir John Burdon-Sanderson's discovery that mould prevented culture fluid from producing bacteria, successfully treated a nurse with an unresponsive infection using a mould-based substance described as penicillium.

In 1877, Louis Pasteur observed inhibition of bacterial activity in cultures of anthrax when contaminated with mould. In 1897, Ernest Duchesne applied the protective properties of mould to successfully cure typhoid in animals. Additionally, little attention was paid at the time to a paper presented in 1920 by Belgian scientists Andre Gratia and Sara Dath, who observed that fungal contamination, which they identified as a species of penicillium, inhibited the growth of Staphylococcus aureus.

Finally, in 1928, Scottish biologist Alexander Fleming noticed a halo of inhibition of bacterial growth in a staphylococcus culture plate contaminated with a mould identified as penicillium notatum. He subsequently isolated and grew the mould in pure culture, which ultimately led to the successful mass production of penicillin.

Figure 1 shows a timeline of modern antibiotic discovery and subsequent resistance according to antibiotic class. 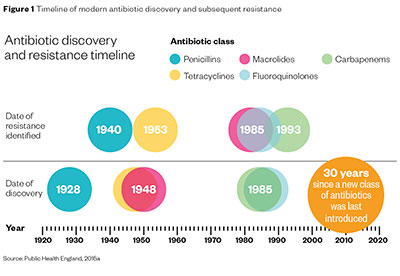 How resistance developed
Bacteria constantly evolve to maintain their viability in the face of the antibiotics used against them, as a consequence of Darwinian evolutionary mechanisms.


The UK government issued a five-year strategy document in 2013 for tackling some of these factors in a bid to reduce antibiotic resistance, through improved infection control measures, improved diagnostics, appropriate prescribing and improved surveillance. 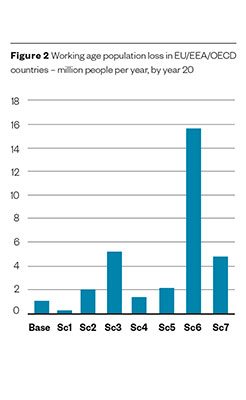 Mortality and longevity effects
Recent deaths owing to antibiotic-resistant infections are estimated at around 50,000 per year in Europe and the US. What, then, does the future hold, given that antibiotic resistance is "no longer a prediction for the future; it is happening right now and is putting at risk the ability to treat common infections"? (WHO Fact sheet, 2015).

A return to the infectious disease mortality of the pre-antibiotic era (the early 1940s) is unlikely.
Quite apart from the increasing focus on new antibiotic development and other areas, such as hospital hygiene, some of the decline in infectious disease mortality is attributable to improved vaccination programmes, enhanced living standards and personal nutrition (for example, tuberculosis or TB mortality is more severe in the malnourished).

For the purpose of generating some reasonable numbers for comparison, assume that mortality relating to infectious diseases increases to around half of its 1940s levels over the next 10 years.
This would imply a return to infectious disease mortality of 0.5 per 1,000 by 2025, corresponding to an annual increase in mortality of around 0.2%-0.3% in relative terms (depending on age range and gender). This gives us some indication of a feasible change in mortality over the medium-term future.

Alternatively, we can consider outputs of the model developed by the not-for-profit research institute RAND Europe as part of the O'Neill review report (Taylor et al, 2014).

The publication focuses on economic impacts rather than directly on mortality, and there is relatively little detail provided regarding the intermediate mortality calculations used in the model.
However, figures available for the impact of antibiotic resistance on the projected loss in working age population, by broad geographical region, indicate an increase in annual mortality of around 0.1 per 1,000 over the next 10-20 years. This is based on considering their 'scenario four', where around 40% resistance rates are reached in 15 years. Scenario four ranks as the second-most optimistic of the seven scenarios explored (not including baseline).

Figure 2 (above) shows the scenarios graphically, with reference to the projected effect by year 20. The baseline of the graph relates to an assumption of no antibacterial resistance. Scenario four represents a mortality increase of about 2%-3% a year which, together with the previous result of 0.2-0.3% a year, shows the plausible range of mortality worsening from antibiotic resistance.

Antibiotic resistance is likely to have, at best, a material impact on expected medium-term mortality/longevity improvements, and, at worst (a 'plausible' worst rather than a 1-in-200 extreme event), could largely cancel out or even negate those improvements.

As of September 2015, an estimated 39 new antibiotics with the potential to treat serious bacterial infections are in clinical development.

Data from the 2015 English Surveillance Programme for Antimicrobial Utilisation and Resistance (ESPAUR) report shows that just 19 antibiotics (belonging to fewer antibiotic classes) currently account for more than 88% of all prescribing in hospitals and the community, and none of these is
a recent discovery.

Two new classes of antibiotic are Teixobactin and Brilacidin. 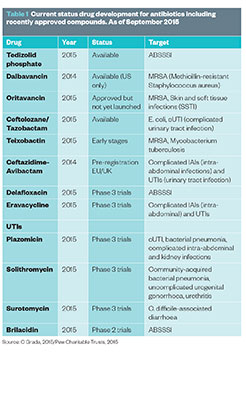 Teixobactin is a small molecule antibiotic
that is active against gram-positive bacteria, representing a new class of antibiotic, which harms bacteria by binding to components essential to cell-wall construction. It was reported to be potent in experimental conditions against a number of bacteria, including those with known antibiotic resistance and TB. While human clinical trials are yet to be conducted, animal trials have also reported success.

Brilacidin is the first of a completely new class of antibiotic called defensin-mimetics, which are modelled on natural human immune proteins and therefore may reduce the risk of future bacterial resistance. This drug is in the phase-two stage of clinical trials, and safety and clinical efficacy were demonstrated in a trial that involved patients with acute bacterial skin and skin structure infections (ABSSSI).

Figure 3 (above) provides a summary of the current status of antibiotic drug discovery, including recently approved compounds, as well as those in the trial process.

It is suggested that a regular supply of two to four licensed 'first in class' compounds per decade would give the opportunity to stay ahead of resistance to preceding classes of antibiotics, as long as each new drug is used only as resistance dictates, rather than as a potential 'block-buster' (HM Government [O'Neill], 2015). Further analysis by O'Neill also suggests that investment is required in order to develop about 15 licensed antibiotics per decade, which should aim to encompass two new broad-spectrum classes and two new targeted therapeutic classes every 10 years, to address currently unknown medical needs.

Since the 1950s, we have taken the availability and efficacy of antibiotics for granted, but it is clear we are now entering an era in which antibiotic resistance will have a material impact on mortality.

In her introduction to the profession's most recent Longevity Bulletin, the UK's chief medical officer, Professor Dame Sally Davies, described antibiotic resistance as "one of the most serious problems we have faced in [her] working lifetime". We agree with her comment that: "It is quite possible, and perhaps even likely, that the recent era of material mortality improvements will give way to many years of material mortality worsening."

Nicola Oliver is the director and head of longevity and mortality at Medical Intelligence (UK) Limited
This article appeared in our June 2016 issue of The Actuary.
Click here to view this issue
Filed in
06