Herd instinct and regulation as a risk 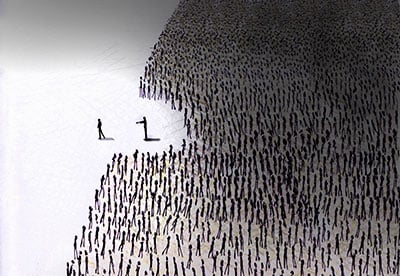 Since the 2007-8 financial crisis, numerous new regulations have been introduced with the aim of reducing risks in the financial sector.

For insurance companies, the main regulatory focus has been on protecting policyholders and, while regulations may be making the insurance sector safer for customers, they could be having the unintended consequence of increasing other risks associated with the sector.

For many actuaries, the most significant new regulation recently introduced is Solvency II. This determines how much capital European insurers must hold to cover risks arising from their contracts and investments, to limit the chance that they are unable to pay their policyholders.

Perhaps the most significant change brought in by Solvency II is the introduction of explicit risk-based capital charges on the investments that insurers hold. This has important implications, particularly for life insurers, given the large investments they hold on behalf of their policyholders.

From the point of view of an individual insurance company, this appears to make sense. Higher-rated assets are less likely to default than lower-rated assets, so encouraging more investment in higher-rated assets should reduce the risk of insurers' assets becoming insufficient to meet their liabilities.

Eggs in one basket
From the viewpoint of the industry as a whole, the picture is less clear. There are concerns that Solvency II may lead to a 'herd instinct' effect on insurers' asset allocations, with the investments of different insurers becoming more homogenous and concentrated in a smaller range of assets. The result could be an insurance industry that is overall less able to withstand shocks to specific asset classes.

Tsunami risk increases as asset allocations across the industry become more aligned, and could mean that the insurance sector as a whole becomes a significant contributor to systemic risk in the economy, even if no single insurance company is truly systemically important in itself.

Given the importance of insurers as investors in bond markets, the IMF also noted that a shock to the insurance sector could hit banking and other industries that rely on financing through bonds, with knock-on impacts in the wider economy.

Overall, the IMF concluded that although systemic risk from the insurance sector is clearly below that of the banking sector, it has increased in recent years, and regulators need to take a more macro-prudential approach to the insurance industry if systemic risks are to be appropriately tackled.

Closely related to systemic risk is procyclical behaviour - action that exacerbates financial market volatility. When insurers face falling equity or debt markets, they naturally seek to bolster their declining solvency positions. Under Solvency II, this points to divesting from riskier assets with higher Solvency II charges, such as equities and low-rated debt, potentially realising significant losses, and moving into safer assets at a time when they may be more costly. So Solvency II asset charges could lead to widespread 'sell low, buy high' procyclical behaviour by insurers, which could significantly increase financial market volatility, as insurers are among the largest investors.

Solvency II contains some features designed to reduce procyclicality - an equity dampener to reduce capital requirements in the event of a sudden drop in equity prices, and the 'matching adjustment' and 'volatility adjustment' to reduce requirements when debt prices fall. However, these apply only in certain circumstances, depending on regulatory approval and strict criteria, and many insurers may still be motivated into procyclical investment decisions by Solvency II, even if they are allowed to use such measures.

Reflecting this, the European Systemic Risk Board recently called for the introduction of a countercyclical capital buffer for insurers, forcing them to build up capital in stable markets, which could then be run down in times of economic volatility. Debates on the pros and cons of Solvency II look set to continue through 2016 and beyond, and it will be no surprise if changes are made.

Investor uncertainty
Insurers have not yet had to publish detailed Solvency II information, but most major insurers disclosed some high-level headline Solvency II figures with their 2015 annual results. Some firms reporting lower than expected solvency capital requirement (SCR) coverage ratios suffered significant drops in their share prices, reflecting equity investors' concerns about how future dividends might be restricted if ratios were to fall further.

The share price of Delta Lloyd, the Dutch-based insurer, fell 43% when the company announced in August 2015 that its SCR coverage was below its target level, although still comfortably above regulatory requirements. Delta Lloyd eventually completed a rights issue in April 2016 to bolster its capital, against the wishes of one of its main shareholders, which took legal action in an attempt to block the process.

Differences in the application of Solvency II across Europe have added to investor uncertainty. Many insurers are applying various transitional measures, which strongly affect their metrics; some are using internal models rather than the standard formula; and some regulators are taking a tougher stance than others in how they interpret and apply Solvency II. Many insurers hold large amounts of sovereign debt. While internal models must reflect any material sovereign-related risks, standard formula users may escape sovereign charges unless regulators impose an add-on, as eurozone sovereign debt is still considered risk-free in the standard formula.

Insurers are likely to aim for SCR coverage ratios well in excess of regulatory minimums to reassure investors that their Solvency II position will not jeopardise dividends. In effect, this looks like a gold-plating of Solvency II standards by insurers reliant on capital markets.

Apart from regulations around capital and financial stability, regulators are also increasingly focusing on the conduct of insurers in terms of how they deal with customers.

In the UK, the Financial Conduct Authority (FCA) recently concluded a study into how fees were being levied on longstanding customers, and is now investigating whether customers who would have been eligible for enhanced annuities were mis-sold standard annuity policies.

This sort of regulatory scrutiny is undoubtedly positive for customers but may uncover issues leading to bad press or fines for the insurance industry and sometimes costly financial compensation payments to their policyholders. Regulatory scrutiny also brings uncertainty for insurers, including subjectivity around what constitutes 'fair' treatment of customers, and the risk that new standards are applied retrospectively, particularly when regulators are assessing potential mis-selling of policies that were sold many years ago.

Regulation that increases capital requirements, or adds to investors' perception that insurers are complicated to analyse, can put up the cost of capital for the sector, ultimately to the detriment of customers. Higher capital costs may lead to less competition, higher prices for customers and the removal of products with particularly high capital requirements, even if they meet important customer needs. This has been demonstrated in the German market, where life insurers have reduced, redesigned or in some cases completely removed investment guarantees on new business in light of the high capital charges associated with these under Solvency II.

Reluctant global leaders
Increased regulation for globally systemically important insurers (GSIIs) may drive large companies to scale back to avoid GSII categorisation and the extra regulatory burden it entails.
Earlier this year, the US group MetLife announced plans to sell a large part of its life insurance business, following its classification as a systemically important financial institution. MetLife cited better operational flexibility and reduced capital and compliance burdens as drivers for its decision. There is an interesting tension between systemic risk and individual company risk.
While the break-up of large firms may reduce systemic risk, it may result in a number of smaller individual entities that individually have less scale and diversification and correspondingly more risks for their policyholders.

The impact of increased regulation on the credit ratings of insurance companies is mixed.
Regulation that leads to improved risk management or higher capital requirements can be positive for ratings, as it increases the likelihood that insurers will be able to repay their creditors.
However, regulatory actions that may result in large fines or that increase uncertainty in the sector can have a negative effect. There has not been a significant change in credit ratings as a direct result of recent regulatory developments. Over time, however, some insurers may reshape their businesses in response to regulations, which may affect their risk profiles and consequently their ratings.

In conclusion, while insurance regulation appears to be effectively addressing a number of risks around individual insurers' ability to pay their policyholders, it could be increasing systemic risks linked to the industry as a whole, with implications for the wider economy.

Sam Mageed is a director at Fitch Ratings, where he covers the UK life insurance sector and is responsible for Fitch's Prism capital model

David Prowse is a senior director at Fitch Ratings and co-ordinates Fitch's European insurance market research and publications
This article appeared in our June 2016 issue of The Actuary.
Click here to view this issue
Filed in:
06
Topics:
Risk & ERM