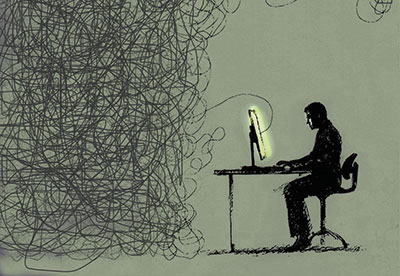 I recently came across David Comerford's 2006 article in The Actuary (bit.ly/1RV7w7O) on negative interest rates. He suggested that this possibility could be significantly higher than the market considered.
Fast-forward 10 years and we're there. Want to invest in a Swiss government bond for 10 years? You'll pay for the privilege.

The reasons we now see negative rates are not precisely those in the original article.

The author cites 'looming environmental crises' and the impact on consumption of natural resources as a potential driver towards negative rates. He correctly envisaged the move towards a largely cashless economy as a pre-requisite (see quote).

The arguments make interesting reading and may well still play out. Perhaps the financial crisis and subsequent central bank policy means we have arrived there sooner than expected.

How ESGs are used by life insurers
One case where interest rates are of relevance to actuaries is in economic scenario generator (ESG) models. An ESG is a stochastic model for economic variables such as interest rates. These are used by life insurance companies to value liabilities and hedge exposure to market risks. They are also used in a context, not discussed here, to quantify capital requirements.

Life insurers have long-term liabilities in the form of pension and investment products sold to policyholders. It is sometimes difficult to invest in assets with similar terms, so life insurers are generally exposed to falling rates. For example, as rates decrease, the present value of their liabilities increases by more than the present value of their assets, which are of a shorter term.

The valuation of liabilities and assessment of interest rate exposure are key to financial solvency and the day-to-day running of the business. But they are not straightforward.

The policies an insurer sells may contain embedded guarantees that resemble financial options on interest rates. The long-term nature of policies sold combined with the non-linear dependence on rates means that ascertaining the liability value and exposure to rate movements is a complex task.

The established approach is to select a suitable ESG model for interest rates, calibrate it versus available market data, and generate scenarios that can be used to value the insurer's liabilities and to quantify the rate exposure through a Monte Carlo approach (Figure 1 below).

Impact of the low interest rate environment
Within an ESG, calibration is the process of finding model parameters that replicate the value of market-traded options as closely as possible. It has become increasingly challenging to calibrate interest rate models to market data as interest rates have fallen.

This has featured in the Euro and Swiss Franc economies, where rates have been near to zero and sometimes negative, and could feasibly occur in the UK in the near future. The cause of this difficulty is two-fold. First, low and negative rates are a recent phenomenon, and work is needed to develop models suited to both present and historic market conditions. The second issue is one of convention - how we express the value of an option.

Interest rates do not behave like stocks
Market convention has historically been to quote interest rate options in terms of a Black volatility. This measure of volatility is associated with an assumption that the underlying rate (typically a swap rate or forward rate) is lognormally distributed. It is the same convention used to quote equity options under the lognormal Black-Scholes model. But interest rates do not move in a relative way as implied in a lognormal model.

Movements tend to be closer to absolute in nature - for example, a swap rate may be equally likely to move up or down by 5bps whether the swap rate itself is 5bps or 50bps. While rates are positive and appreciably above zero, this does not affect model calibration, since the Black volatilities of interest rate options are defined and of similar magnitude, enabling a good model fit to market data. However, if the underlying interest rate is negative, then the Black volatility is undefined, reducing the number of options available for calibration in the ESG.

If the underlying rate is low but positive, the Black volatility may be undefined or take very large values, skewing the calibration in an undesirable way. 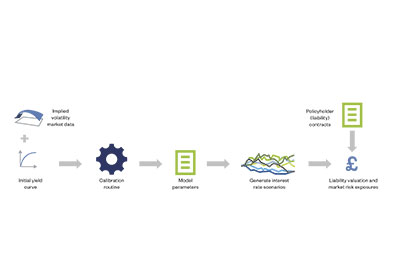 A Normal solution
The solution is simple. The Normal volatility can be used in place of the Black volatility for calibration. Under this the underlying rate is Normally distributed.

There is no requirement for the underlying rate to be positive, and volatility is measured in absolute terms. These features are consistent with how interest rates actually move. The Normal volatility is always defined for a given option price, and its magnitude is similar across different option terms and tenors. It is widely quoted in the market alongside the Black volatility.

When rates are low and/or negative, these factors combine to give a better calibration than is possible using Black volatilities. Several ESG providers now include this option in the calibration process. Industry convention among life insurers remains at present to calibrate interest rate models against Black volatilities, but there is a shift towards using Normal volatilities, especially for calibrations where the risk-free yield curve is very low or negative in the short term, such as for the Swiss Franc and Euro. 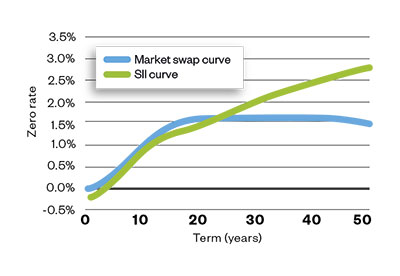 The unintended consequences of Solvency II
In an ESG within the Solvency II framework, interest rate models are calibrated against a non-market yield curve. Through the application of the last liquid point, the ultimate forward rate and interpolation, this may differ significantly from the market yield curve, as illustrated in Figure 2 for the Euro currency at Q4 2015. Why does this matter?

If using Black volatilities, the option price is scaled to the same extent as the underlying rate. For a swaption, if the underlying swap rate doubles then so does the price. As an illustration of these effects, for a Q4 2015 Euro calibration using the Solvency II curve (Figure 2), a Black (Normal) volatility calibration would price a 20Y-20Y swaption as 1.8 (0.9) times its market value.

There are alternative definitions of what market-consistency means and life insurers should be aware of the valuation implications inherent in their choice of calibration convention used to calibrate their ESG.