Pension freedom - is it enough?

Derek Steeden, Sally Rayment and Francis Chua suggest that inclusive projections will help people understand how their actions and non-pension income streams will affect their standard of retirement 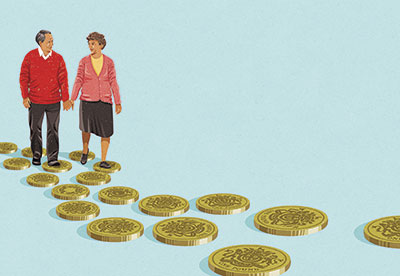 The three-stage model of education - work - retirement is no longer the norm (see Why Retire? November 2015, bit.ly/1MopoIS). People are choosing to retire later and more gradually, and this demands greater flexibility from retirement systems. The new pension flexibilities introduced in the April 2015 UK Budget recognise this. However, without an increased level of savings, the benefit from additional flexibility will be limited.


Later retirement is here to stay
Improvements in health, changes in lifestyle choices and employment law, as well as pension flexibility, all help reduce the barriers to working later in life. For some people, it will be a choice to continue paid employment, but many more will find they need to continue working to alleviate a large drop in living standards. Indeed, 10% of respondents to a recent survey by HSBC believe they will never be able to retire fully.

Some living costs, such as mortgage payments and supporting children, reduce in later life, so that most people need less income in retirement to sustain a similar standard of living. Replacement rates aim to capture this, measuring the income that a person's accumulated wealth could provide for the rest of their life as a proportion of average earnings from age 50 to state pension age. As such, they provide a useful input in answering the question 'how much do I need to save for retirement?'.

Studies by the Department for Work & Pensions (DWP) for example, identify the following replacement rates (Figure 1 below), as a measure of 'adequate' retirement provision, quoted in 2012 gross earnings terms:

The report concludes that while state provision is expected to protect the majority of people on low incomes against a sharp fall in living standards, some 11 million people - 40% of the working age population - will have incomes in retirement below these replacement rates. 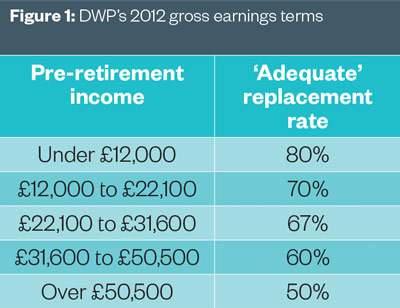 Making the most of not enough
Until recently, the requirement to buy an annuity with pension savings, together with restrictions on when the state pension could be drawn, made it difficult to unlock accumulated wealth at the time or rate at which it was needed in later life. In particular, the tax-free cash element of private pensions could only be taken at a single date and partial drawdown was restricted to the few, leaving most people with the requirement to draw a regular income, which could exceed or fall short of needs in any given year.

As a result, use of non-pension assets to save for retirement has become increasingly common: nearly 50% of people plan to supplement their retirement income with a savings account or ISA, and 17% plan to downsize or sell their home to unlock funds, although it is interesting to note that YouGov estimates that only 4% of households in retirement have actually downsized.

The following charts (Figure 2 below) highlight the variety of sources of retirement income available to would-be retirees aged between 50 and state pension age, and show the significant variance that exists between the flexibility available to low-income households and high-income ones. Why are people not saving more in pensions? When asked by a 2012 DWP survey if they were 'scared' by pensions, 28% of women and 27% of the economically inactive - two of the groups most likely to have insufficient pensions - agreed.

Pensions are often still seen as complex. When combined with not knowing or defining what we want in retirement until much later in life, the consequence is that engagement with pensions only occurs when it may be too late. There are a growing number of tools and publications that promote greater saving, but very few attempt to illustrate the impact of our current actions on future retirement income in a coherent way. Some striking statistics on the impact of these choices are available, such as the following results from a Pensions Policy Institute report.

The modelling (Figure 3) shows that many factors causing the largest variation in future income are within people's control (for instance, by starting saving 10 years earlier, retirement income can increase by almost a third), and could be a useful tool for motivating savings. 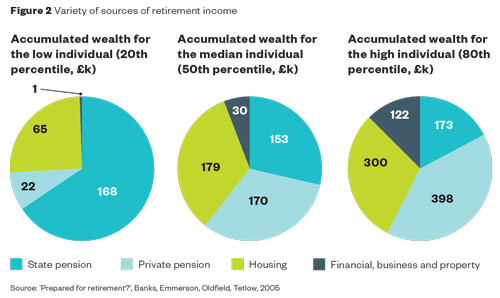 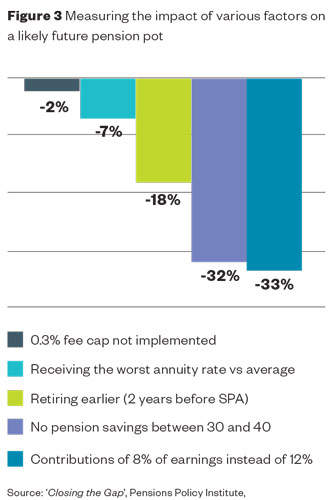 When help is needed
It is reasonably intuitive that contributing a third less to your pension will leave you with a third less income in retirement, whereas the impact of opting out of auto-enrolment is harder to gauge. Many will be more concerned about the impact of fund charges than the impact of not saving at all.

Simple rules of thumb, albeit with their limitations, could benefit many of those whose confusion is prolonging pension procrastination. We found that while 'pension calculators' abound, none attempted to combine the 'non-pension' routes people are increasingly using for retirement. This makes it difficult to answer questions such as:

More 'holistic' tools would help answer these questions for those seeking answers. Others would benefit from regular information produced automatically.

We highlight some possibilities:

Benefit projections should also operate in a complementary fashion to promote a holistic view - for instance, they could also incorporate non-pension assets and even include a way for individuals to specify a target income and from that understand a feasible savings plan that would achieve it.

Retirement planning may seem academic for young workers, but holistic tools would help more people engage with the issue while their choices have a long enough time to make an impact. An information gap remains, but it is not unbridgeable. As actuaries, we have an opportunity, together with asset managers, insurers, financial advisers and government departments, to develop the solutions that are needed.

Francis Chua is a member of the Aviva pensions investments team

All three are members of the profession's Why Retire working group.