Rise of the machines

The age of technocracy may be soon upon us, says Jessica Elkin, so who better than actuaries to manage the possibilities and mitigate the risks? 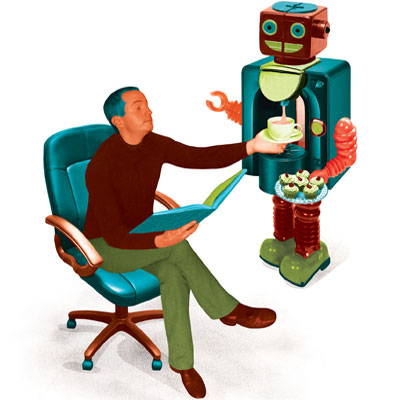 You know you're reaching a certain age when you hear about some new technology and it feels as though you're living in the future. You marvel at the wonders of science and wonder what your younger self would have said to any of this.

Often I imagine what it would be like to tell another generation that I knew a time without the internet; to watch the horror descend as they imagine a life sans social networking and FaceTime. I'll teach them to play analogue cards and enjoy their baffled faces. I'll start to wear purple á la Jenny Joseph. I already use phrases like "in my day" and recoil when music is played too loudly.

This works both ways. There is usually someone older around telling you of a time when TV didn't exist, and they travelled by horse and carriage (or barefoot six miles to school, depending on who is telling the story).

I think about this more at work than anywhere else. Imagining performing pension-scheme valuations by hand is quite a disturbing exercise. Checking whether you'd qualified by scanning the newspapers first thing in the morning was once the norm. Not to mention reading paper copies of The Actuary. Just imagine!

Oh, didn't I mention? We're available by app now, on both iPad and Android.

You can read this hallowed publication secretly on the train, interchangeably with your Kindle version of Fifty Shades of Grey, and no one will be any the wiser. If you're so inclined, search the app store or Google Play for 'actuary magazine' and you're away. It is better for the environment than a hard copy and better for your intellect than E L James.

Never let it be said that actuaries are afraid of technology. We adopt it to help us perform our work better, more accurately, and faster. To free up our time to be brilliant in new and innovative ways. A friend of mine even recreated the old Nokia game Snake in a spreadsheet. Things like that.

Aubrey de Grey, our fascinating interviewee for next month's issue, reckons that in years to come we'll have loads of free time as everything will be automated and there'll be nothing for us to do anymore. Not to mention that we may be living to a thousand years old and will need to occupy ourselves somehow.

Machines will have taken over, but in a good way, like when someone bossy takes over a tiresome, mundane project and you're secretly glad they have. I'll finally have time to read Crime and Punishment. And still choose not to. For actuarial students, the exams are going to become far more computer-based over time. Computing is likely to become part of the Fellowship syllabus. New technology is already available that allows remote invigilation via webcam, and the ability to see what is open on the candidate's computer.

Concerns about data theft and spyware will ebb and flow before these new possibilities become humdrum reality, but they will ultimately be eroded one way or another.

You can't stop the future.

There are downsides to our human cleverness.  We're all sleeping terribly due to all the blue light, and everyone is depressed because life doesn't have an Instagram filter.

I saw a play called The Nether last year set in a future, in which everyone lives their entire lives on a virtual network - education, work, and play. Brilliant and alarming new possibilities were opening up, and new ways to fight and commit crimes alongside.

It felt like an insight into what was to come. The morality of this progress is a moot point, since it's all inevitable.

I wrote last month about actuaries being replaced by robots. Before that happens we'll be using the machines to our advantage, and maybe when it does happen we'll be more than happy to hand over the rubbish work to them. De Grey refers to this as a humanitarian concern - no one wants to do boring things, so we find a way to get machines to do them instead. Laziness is the mother of invention.

The question of what will come about as a result of our bulky brains and opposable thumbs is of interest, but the outcomes are hardly controllable. It is only left to embrace change and attempt to mitigate the future risks as far as possible - and who are better placed to think about this than actuaries? Perhaps we'll be needed after all.

This article appeared in our March 2016 issue of The Actuary.
Click here to view this issue
Filed in:
03