The rise of a maverick 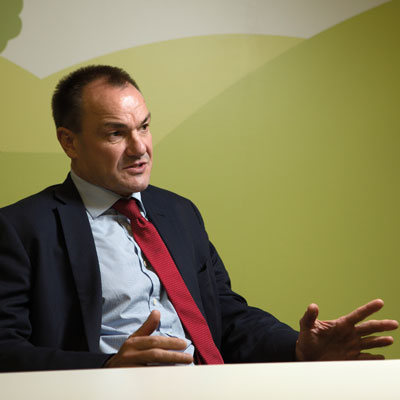 Mike Brockman is the founder and chief executive of Insure The Box, a UK telematics insurer whose majority shareholding was acquired by Aioi Nissay Dowa Insurance Europe in 2015. A self-confessed rebel, he started the venture in 2009 in the midst of the recession, against the advice of others. But with an extensive career in motor insurance and prior experience of setting up companies, if anyone could make it happen, he could.

Brockman's career began in the actuarial department of Pearl Life Insurance in 1979. "I hated it," he says. "It was everything I thought actuaries were not." With a post-graduate university position lined up and a letter of resignation on his boss's desk, things could have turned out very differently. Luckily, Pearl saw his potential and offered him the chance to transfer to personal lines motor pricing.

"It was a very small unit that did multivariate pricing. I was one of the first trainee actuaries to be involved in the pricing of personal lines insurance and I loved it so much that I stayed."

In 1986, Brockman moved to Bacon & Woodrow, a pension-based consultancy, where he helped set up its general insurance practice. Then in 1993, he embarked on his first start-up, co-founding EMB, an actuarial and software company, which grew and flourished internationally. He also did a lot of work on pricing techniques, which resulted in being presented with a lifetime achievement award by the Institute and Faculty of Actuaries (IFoA) in 2008. "I was very pleased and honoured to receive it," he says.

"It was centred around my pure actuarial achievements throughout my career at EMB and also my influence with pricing using generalised linear models."

The award was a fitting end to Brockman's actuarial career, as by that point the seeds of setting up a new company had been sown. "I had already decided that my actuarial career was finished and that I was going to move on to something quite different. Throughout my career I had advised on everything, including pricing, capital, reserving and new start-ups. I became interested in telematics because motor insurance was getting boring, with customers seeing it as a necessary evil and aggregators dominating the markets."

With low profit margins in motor insurance, Brockman looked towards telematics as a way to make a profit despite increasing the cost of the product. He explains: "I saw telematics as a way of using technology to maximise customer satisfaction at all aspects of the customer value chain." Deciding that he couldn't develop his ideas as a consultant, he set up Insure The Box.

Around that time, his former EMB colleagues decided to sell the business to Towers Watson, releasing funds to use as seed capital. With the support of colleagues, and with underwriters such as Catlin and Munich Re on board - providing underwriting expertise and, in Catlin's case, capital - the product was developed and the first policy sold in June 2010.

Telematics is described by Brockman as "the concept of machine-to-machine communication". In the context of motor insurance, a black box is fitted to a car and relays real-time information to the insurer. While the information can be used in underwriting decisions, Brockman is keen to point out that the benefits are more than just financial.

"We had one driver who crashed his car in a ditch. We were able to inform the emergency services who were there within five minutes, saving this young person's life."

While there are benefits to telematics, for some the idea of being 'monitored' in such a way may seem a step too far. When I ask whether this has been a challenge in bringing the product to the market, he replies: "The whole ethos of being monitored is that there is a benefit to go with it. The benefits of technology far outweigh the cost of perceived data privacy issues."

Consumers are embracing similar technology in their homes, with products such as those allowing energy usage to be monitored or central heating and hot water to be controlled remotely, thereby saving energy. Brockman thinks the idea has huge potential for resource management.

in the realms of efficient use of commodities, then that could be hugely beneficial in terms of reducing the amount of waste in the world."

With technology at the forefront of the company, we discuss the impact it has had on our lives and what the world may look like in the future.

It is hard to imagine life without smartphones and yet they are a recent invention. With websites seeing an increasing amount of traffic from these sources, firms have to invest in digitalisation to stay competitive.

"In a technological world, systems always have to be reappraised," says Brockman. "Telematics is 'super-direct' in the sense that we are dealing with customers all the time through channels such as live chat or social media. We also have to be ready for the fully-connected car that uses the idea of the 'internet of things', where you control entertainment needs, for example, through smart interactive voice software."

The driverless car is another concept that is advancing rapidly. "In my personal view, fully autonomous cars will never happen," says Brockman. He explains that although anti-collision capabilities are being introduced in certain makes and models, it will take years for it to work through all the cars on the road in order to be in a position, for insurance purposes, where no cars crash.

Even if this does happen, Brockman is sceptical about its success. He says: "Think of a world where every car is programmed not to crash. It will be the biggest traffic jam the world has ever seen!" Nevertheless, he does think that technology will change our driving habits and envisages that perhaps drone cars will be the reality. But he points out that technology is changing so rapidly that it is difficult to predict what the future will look like: "The flaw is that people think of technology as it is now. Don't listen to people who say what the world will be like tomorrow. One thing for certain is that they will be wrong. We need to be flexible in our approach and do something different."

Risks on the horizon

I ask whether regulation such as Solvency II has made it difficult to be different. "I try not to think of regulatory issues," he states candidly, but explains: "My guiding principle is that if you do what you think is best for customers and put their interests before shareholders, run your business in a financially sound way and also are open and honest, then you can't go far wrong with regulators."

With Solvency II presenting an issue for many actuaries, it is perhaps an unconventional response. However, Brockman no longer sees himself as an actuary. "I see myself as a businessman with experience in a number of areas," he says. "I have to have more flexibility in my mindset than in a strict actuarial role."

He acknowledges that not all actuaries would like his job, but would like to see actuaries developing broader business skills. "The profession should do more to make actuaries 'rounder'. If actuaries keep to a narrow view and skill set then they will never develop to their own potential." Citing the example of pricing products, he explains that technical pricing, the forte of actuaries, is only half the story behind successful pricing. "Actuaries have to know product design and price things customers want to buy. That may be uncomfortable sometimes so then the question becomes one of risk management."

Brockman would like to see actuaries play a greater role in adding value to business. "The claims side is a frustrating area," he says. "It should be compulsory that every actuary signing off reserves should have at least two visits to the claims department each year." He suggests that the IFoA should run courses on the wider aspects of business and how actuaries could add value. "Actuaries are interesting people with a unique mathematical ability, but that needs to be turned into something that is a real asset for the business."

Brockman thinks that the area of 'big data' is one that actuaries could contribute to, but he warns that it needs a change in attitude. "Actuaries need to learn new tricks, but they need the environment to breathe. The profession, in my mind, has constrained the ability to innovate in order to tick all the boxes. While this is fully justified in certain circumstances, it mustn't stop proper research and innovation in new areas."

With companies such as Google, Microsoft and Amazon developing machine-learning tools that are available to the public, Brockman is concerned about the threat to actuaries. He says "there are huge risks on the horizon; the profession needs to keep its eyes open and adapt to the rapidly moving world around it".

Brockman obviously enjoys his work. Driven by customer satisfaction and with a solid background in actuarial techniques, he appears to have found a successful combination. He says: "Actuarial skills never leave you, they are just applied in a different way. My advice is that if you have the right communication skills and personality, and have got the actuarial T-shirt, then don't be afraid to use those skills in wider industry. If, as actuaries, we take off our own shackles, then the world is our oyster."

This article appeared in our March 2016 issue of The Actuary.
Click here to view this issue
Filed in
03
Also filed in
Interviews