It's a fair COP 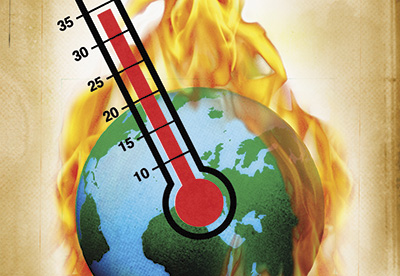 As one leading commentator, Jeremy Leggett, put it: "On Saturday I witnessed something that nothing else in human history comes close to, in terms of scale and stakes. Most of the nations on earth, 195 of them, adopted the world's first universal agreement to fight an existential threat to civilisation, and indeed life as we know it, on the planet."

The Paris Climate Agreement, adopted in December at the end of the UN climate summit, COP21, is a momentous outcome. It will be interesting to explore what the end of the fossil-fuel era will mean for business and financial services.

So what did two weeks of intense negotiation preceded by many months, indeed years, of work behind the scenes achieve? The agreement sets out commitments to:

I was privileged to represent the IFoA during COP21 at a Sustainable Investment Forum (SIF15) Roundtable event in Paris organised by Carbon Tracker, the not-for-profit organisation that helped coin the term 'stranded assets' - where environmental policy devalues or strands fossil fuel reserves. The roundtable topic was 'Strategic risk disclosures for fossil fuel companies'. It followed the launch of the report on 'Recommended strategic risk engagement principles for fossil fuel companies'.

From the outset, there was agreement that greater transparency by companies and standardisation of reporting disclosures is necessary. The recently-announced climate taskforce to be chaired by Michael Bloomberg is seen as an excellent initiative.

There was much discussion around investment in coal companies. What percentage of a company's business might be based on coal before investors begin to shun it? How might that view be reflected in capital market indices? It was noted that existing indices cover a range of fossil-fuel capital market exposures: fossil-free, ex-coal and several other variants. No standard has yet emerged.

The discussion turned to insurance companies. Some have extensive expertise in assessing climate risk, but the industry practice of annual repricing hinders a long-term assessment of this. Further, while the liability side of the business might be expert on climate risk, does this expertise flow through the internal governance processes to influence the company's investment strategy?

It was suggested that some investments held might actually be increasing the risks that the insurance business is seeking to mitigate.

As we looked at the issue of stranded assets in the financial system, we discussed the potential for wider regulation, delivering disclosures from entities other than fossil fuel companies. Might light-touch regulation of pension funds nudge them in the right direction? One UK pension fund has recently published an investment policy which states: "Our objective is to ensure our fund's investment portfolio and processes are compatible with keeping the global average temperature increase to remain below 2°C relative to pre-industrial levels".

How might such a policy be moved from a leadership role towards best practice? Moreover, this fund's policy explicitly refers to the role of the actuarial valuation and funding in meeting the objective. It was noted that many pension funds in Europe are further ahead in managing climate asset risk (and other environmental and social governance factors) than the small number of UK pension fund leaders.

Bank of England governor Mark Carney's recent speech to insurers on climate risks helpfully splits them into physical, transition and liability risks. This was seen as a useful framework for financial services and business to build on.

One participant referred to the recent French law that will drive mandatory climate disclosures by investors. At the time of writing, the details are not clear. But this law might be broadly seen as making mandatory the voluntary Montreal Carbon Pledge to measure and report an investor's carbon footprint. We also talked about the developing perspective around fiduciary duty. Once viewed narrowly, a growing number of asset owners see the management of carbon asset risk as a duty to be met, rather than an ethical issue to be avoided. Further, the potential legal risk of pension fund trustees is beginning to gain greater prominence through initiatives such as the Climate Pension Legal Initiative.

The recently-launched Commonwealth Climate Law Initiative (CCLI) was also highlighted. CCLI plans to look at fiduciary duty with respect to climate change risk in some Commonwealth countries (starting with the UK, South Africa, Canada and Australia), for both company directors and pension fund trustees.

As the IFoA representative on the Advisory Panel for the Stranded Assets Programme at one of the organisations involved - the Smith School at the University of Oxford - it will be interesting to see how this research evolves. The other partners are Client Earth, environmental lawyers, and The Prince's Accounting for Sustainability project (A4S).

What conclusions can we draw, both from this roundtable and the historic COP21 outcome? First, climate change is firmly on the agenda of governments and regulators. The Paris agreement provides a clear signal for investors, companies, governments and civil society that the transition to a low-carbon economy is inevitable. Many years after the Kyoto Protocol, and six years after the disaster of the Copenhagen COP15, governments have united to start tackling climate change with serious intent. There is much more to do. Governments will need to scale up their ambition, and deliver on their commitments. They also must provide the framework, the stability, for the private sector to move forward and take advantage of the opportunities that arise. This will all take many years; it's a multi-decade timescale.

Second, now that investors and others have got the attention of governments, it seems likely they will increasingly be expected to do their own part. This will mean increasing the flow of finance for renewables, introducing low-carbon investment strategies, considering the advantages of green bonds, and collective engagement with companies through the exercise of share ownership rights (for example the BP and Shell AGM Shareholder Resolutions earlier in 2015).

Third, as the president wrote in her November 2015 Opinion, there are excellent opportunities for actuaries to develop and use their skills in this area. The profession's position paper (bit.ly/22MCIOr) clearly states climate change is a risk issue. And of course, actuaries are the high priests of risk! Our general insurance colleagues have been involved here for many years, and now investment consultants and scheme actuaries are getting involved. Perhaps climate risk is big enough to figure in some actuarial firms' business models.

If a UK pension scheme has an investment policy that is aligned with a 2 degree world, what might that mean for a profession following its clients where they plan to go?.