Lady Susan Rice, a global leader in the banking industry, talks to Richard Purcell and Stephen Hyams about emerging risks, encouraging sustainability in business, and jumping into the unknown 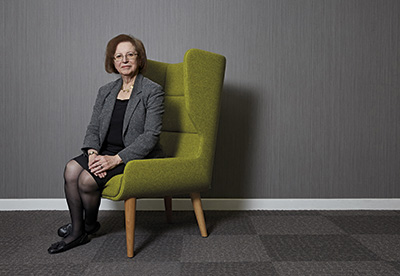 Lady Susan Rice has had a distinguished career. Previously chief executive at Lloyds TSB Scotland, she is the first woman to head a clearing bank and has sat on the Court of the Bank of England. Today, she chairs the Chartered Banker: Professional Standards Board (CB:PSB) and is a founding director of the Banking Standards Boards (BSB). It is at the BSB's London base that we meet up with her.

A gentle and unassuming figure considering her many achievements, Rice speaks to us following her address on the role of banking and business in society at the Institute and Faculty of Actuaries' (IFoA) Autumn Lecture. She begins by describing her early career. Born and brought up in the US, as an undergraduate she studied microbiology and psychology. After graduating she took a job in the clinical research team at Yale. Senior administration roles followed at both Yale and Colgate universities, which gave her the experience of dealing with a broad range of stakeholders, from academics through to striking staff. Her move into banking came following her relocation to New York and a job offer at a Manhattan bank. Rice says: "I was thrown into a whole range of challenges, from mergers and acquisitions, private banking, to projects on financial inclusion and community redevelopment."

On moving to the UK, Rice accepted a position at the Bank of Scotland, which "needed a different perspective". Once again she was working in areas she had no prior background in, such as creating a bancassurance channel, and other new products. It was this "learning while we were doing" that she seems to have thrived on most.

Rice explains that her next banking role at Lloyds TSB Scotland almost didn't happen: "A headhunter had been trying to get hold of me, and eventually my PA got fed up, so arranged for him to speak to me on the way to the airport." The rest was history, and Rice joined the bank as chief executive, again attracted by doing something new.

She remained as chief executive from 2000 until 2009, when finally she felt: "I'd had a good run." However, her sense of loyalty to her colleagues and the organisation at a difficult time led her to stay on as a senior executive until 2014.

Today, as director of the BSB, Rice explains that following the financial crisis "the industry was challenged to address culture in banks, in part as a result of a parliamentary commission". The plan is that by raising standards in banking it will "help the industry become stronger by having it reach beyond regulation".

She also outlines the importance of the CB:PSB, which preceded the BSB. "It is focused on creating professional standards and behaviours for individuals rather than organisations.
"Bankers don't think about themselves as professionals, yet it's an industry that requires judgment.

"There is also a natural asymmetry of information between the bank and the customer. We need to ensure that banks do the right thing by customers."

We move on to the CB:PSB's new principles-based code - similar in that respect to the Actuaries' Code. Rice is very clear: "It will take years to have an impact and change the culture of banking - what's more, the code needs to be included into corporate codes." But looking to the future, she adds: "The UK has been viewed as a leader of conduct for many years, and the CB:PSB and BSB are potentially models that could be replicated elsewhere in the world."

Many of the emerging risks that affect banking today are also relevant to the broader financial market. A key issue Rice mentions is increased complexity in regulation: "There can be too much focus on it," she says. "We also need to stand back and ask some simple questions. Freeing up management time for this is a challenge."

Also on her agenda is technology - in particular, smartphones and mobile Wi-Fi boxes. As she explains: "Personal Wi-Fi will become ubiquitous and mark an irreversible change. We will need to move from mass customisation to individually tailored products."

With the plethora of new technology, Rice asks: "How do we handle all the additional data?" Associated cyber-risks are also of concern: "Banks are heavily focused on this, and we need to help customers understand the implications of what they do. For example, emails aren't gone when you delete them." She is also troubled that: "Cyber-attacks can start within existing systems in ways we don't at first see."

A final area of concern for Rice is the disaggregation of banking: "How does a bank form a credit history on someone who's only ever used online payment services?" Interestingly, it's in this area that she sees a key role for actuaries in banking: "Actuaries can help identify patterns and understand risks from the way we live."

Rice spoke about sustainability in her Autumn Lecture. On carbon emissions she admits: "No one is meeting the targets, and part of the problem is not being able to independently measure success and allow for population change in any targets." She is clear that "businesses need to start thinking about a sustainable economy". To incentivise firms she believes that investors need to: "Look beyond financial numbers - which don't necessarily mean the business is sustainable." She calls for greater metricising of long-term environmental factors and again believes it's an area that actuaries can help with.

As chair of Scottish Water, the environment is a key issue for Rice. She explains: "Utility companies are huge emitters of carbon, but Scottish Water has a remarkable record of neutralising greenhouse gases." She believes government has a role to play in incentivising the wider business community to take sustainability seriously. "No company ever wants to take the first step. Governments can help to legitimise behaviour through setting targets and creating subsidies."

Throughout her career, Rice has been motivated by making a difference to other people: "I was brought up to believe that if you have done well in life you need to give something back." This is certainly evident in the community development projects she is involved with, as well as driving greater professional standards in her banking roles, and her passion for sustainability in business.

When asked about the secret to her success, she says: "Communication." She continues: "You have to listen to others, articulate ideas and be able to write." She recalls being asked what she did by her daughter's friend. Rather than say she worked for a bank, she paused and simply stated: "My role is to communicate with people."

It's clear Rice also relishes a new challenge. "I love jumping into the unknown, that sense of edginess. I also enjoy using my past experience to make connections between problems." She admits: "I had to learn to say upfront that I didn't know something and then ask questions."

Ultimately, she believes: "You have to be interested in what you do." It's clear that this thirst for knowledge, and to understand new areas, has allowed her to make bold and successful leaps into unknown territories.

This article appeared in our February 2016 issue of The Actuary.
Click here to view this issue
Filed in
02
Also filed in
Interviews